Cancer – it’s the dreaded C word that doesn’t discriminate and at just 32 years of age, Leanne Nicholas has been diagnosed with the insidious disease for the second time in her young life. It’s a cruel hand she’s been dealt, but the brave mum is not about to give up without one hell of a fight. This is her story.

Leanne Nicholas and her mum Anne watch on as three-year-old Jessica jumps with boundless energy from one lounge chair to another, their faces full of love and pride for the mischievous little girl. But tragically, there’s an underlying sadness in their eyes at the unthinkable possibility that Leanne may not be here to watch her precious daughter grow up.

Two years ago Leanne was diagnosed with stage four pancreatic cancer, which unfortunately by that stage, had spread to her lungs. It was a devastating blow for the then 30-year-old, who had already battled and survived ovarian cancer when she was just a teenager.

“I was suffering from a lot of backache, which I now know is a classic sign of pancreatic cancer, but back then Jess was 18 months old, I was carrying her everywhere and I just put it down to being a busy working mum,” says Leanne.

“That’s the problem with pancreatic cancer, it has so few symptoms, which makes it difficult to diagnose. Most people are stage four before it’s discovered.”

Given her medical history, Leanne was sent for an ultrasound to rule out anything sinister and at that stage, it was nothing more than a precautionary measure. 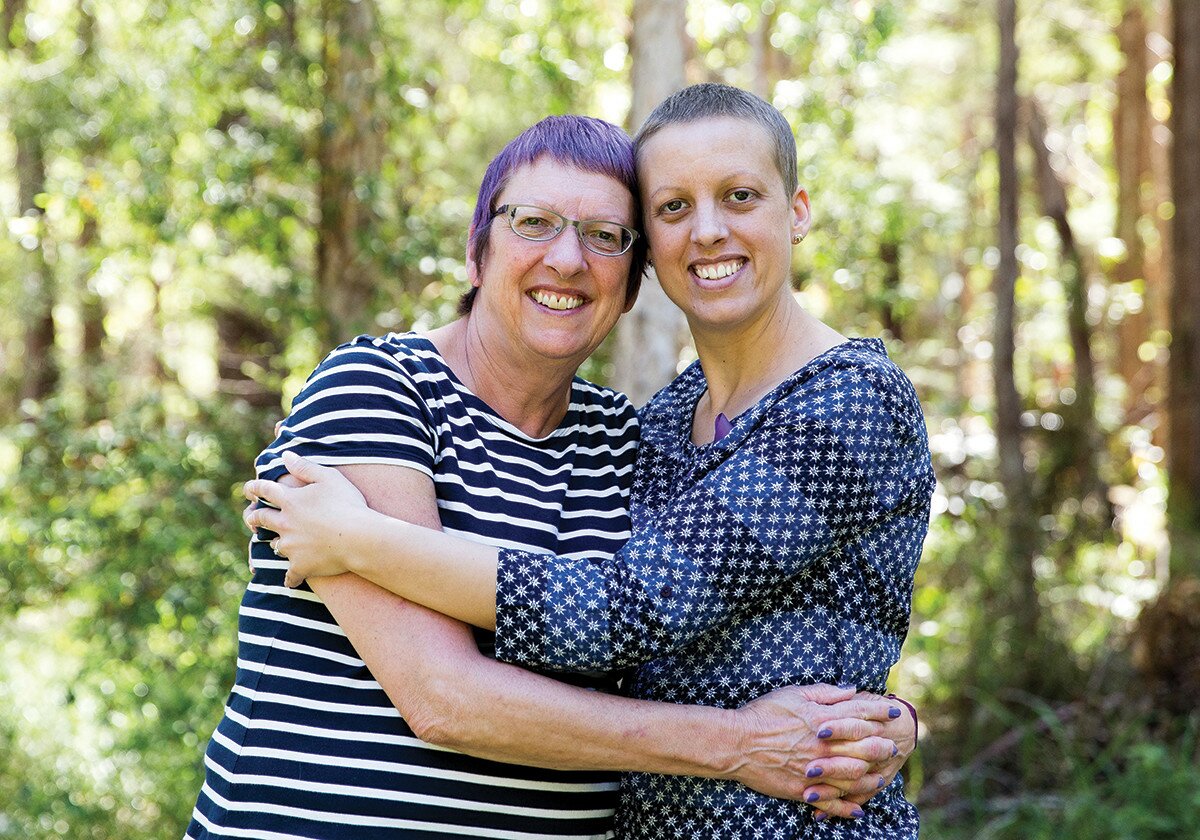 Leanne Nicholas and her mum Anne

“To be honest I remember thinking what an inconvenience it was to have to take time off work for the tests,” says Leanne. “I really didn’t think I could be struck down with cancer again. Even when the ultrasound came back and they wanted me to have further scans, I still didn’t think it could happen to me.”

Sadly, the CT scan revealed an unexplained mass on Leanne’s pancreas and more alarmingly, it also showed nodules on the lungs. It was cancer.

“Still at that point I was clutching at straws,” says Leanne. “I was thinking of anything else it could be. There must have been some other explanation – surely it was just scar tissue from a chest infection, it was unbelievable really. It’s not something you can really take in. In fact, it wasn’t until starting treatment that it started to sink in.”

The determined mum has fought the disease with everything she has for the past two years, and despite enduring hundreds of chemotherapy infusions, which stripped her of her immunity and left her with constant nausea, the treatment was effective in shrinking the tumours in both the pancreas and the lungs.

However, in February this year doctors discovered the treatment was no longer working and Leanne has started a new chemotherapy regime, which is testing her strength and positivity like never before.

Administered over five hours at the hospital every fortnight, Leanne is then sent home with a pump for 48 hours to complete the gruelling treatment, which leaves her feeling terribly sick and fatigued.

I really didn’t think I could be struck down with cancer again, even when the ultrasound came back and they wanted me to have further scans, I still didn’t think it could happen to me.”

“I’ve been really, really sick with nausea, vomiting, everything you read about. It is so difficult to even function, let alone try to be a wife and mum. Tired doesn’t begin to cover it; it’s like an exhaustion you can’t even describe,” says Leanne.

Thankfully, Leanne’s mum, who resides in the UK, has been by her side for most of her journey.

“Mum was on holiday from the UK with Dad, Ian, just before I started this new chemotherapy. I ended up in hospital for a week with fluid on the lungs and Mum decided to stay until I got through the first treatment but that has been such a struggle, she is going to stay until my sister arrives from the UK to help. It’s hard not having family here, but we have great friends,” says Leanne.

“It was such devastating news when we heard of Leanne’s diagnosis,” adds Anne, “but she is my daughter and I will do anything to help her.”

Also a never ending source of strength and support is Leanne’s husband, Shayne.

“I think it’s really hard for him because men generally don’t speak about their feelings the same way us women do. He can’t go down to the pub and have a chat because that’s just not what blokes do.

“He manages really well considering, and his boss and colleagues at work have been really supportive. It makes me happy to know they are there for him.”

Incredibly, despite the challenges the dreaded disease has thrown at her, Leanne still manages to look for the positives and is eternally grateful of the support she has received from her circle of friends. 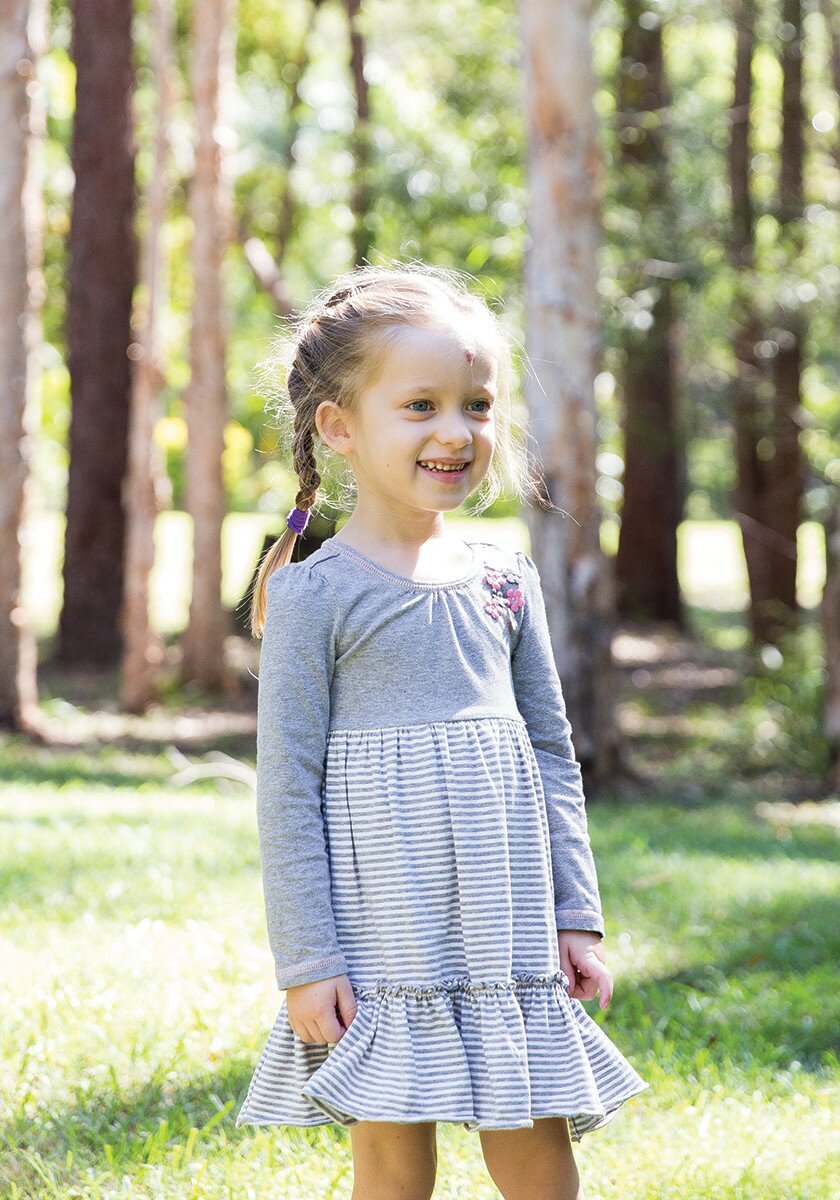 “It definitely makes you appreciate every little thing more,” says Leanne. “Not that you see everything through rose-coloured glasses mind you. When Jess throws a tantrum I still get cross, that’s life – but I do value the “I love you mummy” moments more now than ever.

“I also can’t believe the level of support from my friends. It has been beyond what I ever expected. It’s true you don’t realise the support you have until the situation arises. They recently held a charity fundraising day for me and one of my dear friends Tegan shaved her head in support. They raised over $2000 dollars.”

The funds raised will towards genetic testing for Jessica, who will be checked for the BRCA gene (a mutation of the gene that produces tumour suppressant proteins).

“It might just be coincidence that I have had cancer twice but we are looking at whether it might be genetic. Although there is not much family history of cancer, it might have started with me so it’s really important Jess is tested as they can now tailor the treatment for the BRCA gene in some cases.”

Leanne’s best chance of gaining more precious time with her family is being accepted to take part in a new clinical trial involving immunotherapy treatments.

“Chemotherapy destroys your immune system as well as the cancer cells. Immunotherapy helps your system defeat the cancer cells themselves. It’s working well for lung cancer and melanoma patients.”

I am terrified at the thought of dying, but I still maintain hope for the future – I have to.”

However, it’s unlikely the treatment will be locally administered and Leanne will need to travel to another city or country to take part in the trials, which comes at a huge cost for the young family, who are already struggling to make ends meet.

“My best chance of survival is to get into a clinical trial, which may involve significant travel and accommodation costs, or to personally fund treatment with medications that are not available through the public system. The costs of either option are significant, and are beyond our reach.”

Sitting comfortably in the safety of her nana’s knee, little Jessica flashes me a big smile. Although she is aware her mummy is sick, thankfully she is too young to fully understand the gravity of the situation.

Tired doesn’t begin to cover it; it’s like an exhaustion you can’t even describe.”

“She was just 18 months old when this all started, too young to understand. But recently, with me being in hospital, she is really picking up on things,” says Leanne.

“I guess we are trying to approach it gradually and also I don’t want her to spend her whole childhood being scared.

“I am terrified at the thought of dying, but I still maintain hope for the future – I have to. It’s hard to remain positive on the days I’m feeling less well and I wonder where I’m going to get the energy from to get through the day. But I try to keep positive for little miss three over there,” she says looking adoringly at Jessica.

“I want to see every little bit of her life that I can and I don’t want her to experience what she might have to.”

We’re right behind you, Leanne.

To donate go to gofundme.com/leannesfight