As part of the local WIN News team, Hannah McEwan is the polished presenter who brings us the all important weather details each night. Profile catches up with the soon-to-be mum-of-two to learn more about what keeps her busy both on and off camera.

Meeting Hannah McEwan for the first time is like catching up with an old friend. Exuding a warm and down to earth nature, she is completely at home in her surroundings at the local WIN studios at Maroochydore, where she delivers the weather from to our lounge rooms each night. A formally trained meteorologist, it’s not hard to see that Hannah is exactly where she has always wanted to be.

I was always fascinated by the weather,” says Hannah. “I remember the exact moment I decided that’s what I wanted to study. I was about 10 and I was watching a big storm roll in and I thought, yep that is what I want to do.”

Growing up on the South Coast of Southern Victoria, the eldest of two girls, Hannah was always an outdoor kind of girl. The daughter of a competitive surfer, and a keen surfer herself, being out in the elements – rain, hail or shine, was part of her upbringing.

“I was a bit of a tomboy to be honest. My dad got me into surfing, he was a competitive surfer back in the beginning, when Quicksilver was working out of a shed in Torquay, near where I grew up.”

Having also shown a flair for the performing arts, Hannah was often front and centre in school productions and says her role as a weather presenter is the perfect blend of both her passions.

“I was always into performing, and I guess I was used to being in the spotlight in school plays and such, so the idea of presenting really appealed to me as well.” 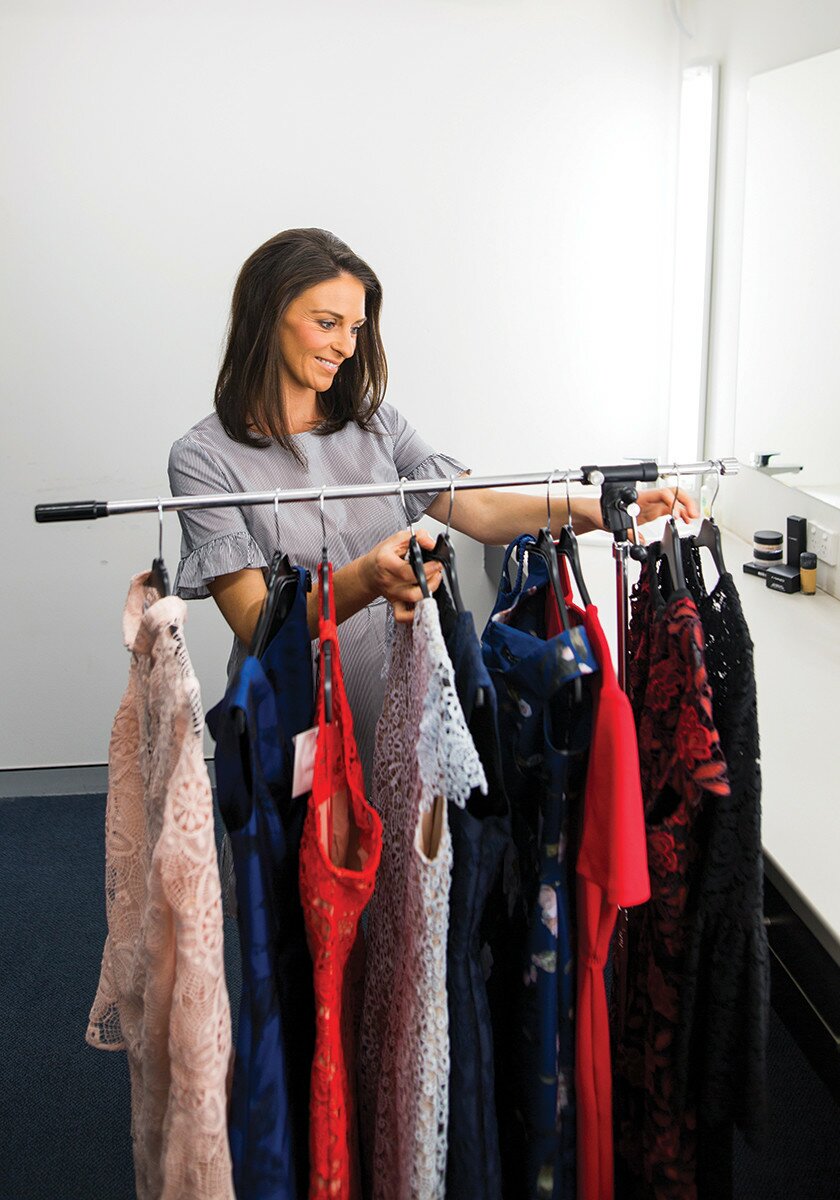 Leaving home at 18, Hannah moved to Melbourne, where she lived on campus at Melbourne University while completing her degree in meteorology.

“Meteorology is a tough course, with full on contact hours,” says Hannah. “I really wanted to go travelling but mum advised me to finish my degree first, which I did before booking a one-way-ticket to London. A short trip turned into me travelling for five years and I worked in Portugal and the Canary Islands as a surf instructor for Quicksilver for about two years. I also travelled to Morocco and did lots of surfing there, it was fantastic.”

But the call of home beckoned and Hannah returned to Sydney where she landed a job writing scripts for weather presenters on major television networks.

Hannah’s first big break came when she was offered a position at Channel Nine on the Gold Coast, where she gained valuable experience as the backup weather presenter before moving back to Sydney.

I worked there for a year and then I got a job with the weather channel in Sydney where I worked for a few years. I was freelance to begin with and in the last year I became the full time co-presenter as part of the morning weather team.

“It was really hard work. I don’t know how people do it, I only did it for a year. You become a different person. You start early and finish early but it’s so hard to try and maintain some kind of social life. I was in my mid 20s and wanted to go out with my friends. My housemates were still partying when I was leaving for work.”

As fate would have it, Hannah’s dream job found her when she received a call from the News Director at WIN offering her a coveted weather presenting role on the Sunshine Coast.

“I was looking for other work and I had a job offer in Canada, but because they weren't sure if my accent was going to be well received, and at that point I was 28, I decided to move to the Sunshine Coast and I’m still here five years later.

“I really love my job and I love living on the Sunshine Coast. The training I had at the weather channel was to ad lib everything, so that has stood me in good stead. While we do have a script for closed captioning, I have a rough guideline I work from, but it’s all off the cuff and being a trained meteorologist makes it a lot easier.”

Hannah’s workday is fast paced from the moment she walks into the studio until the news goes to air that evening. 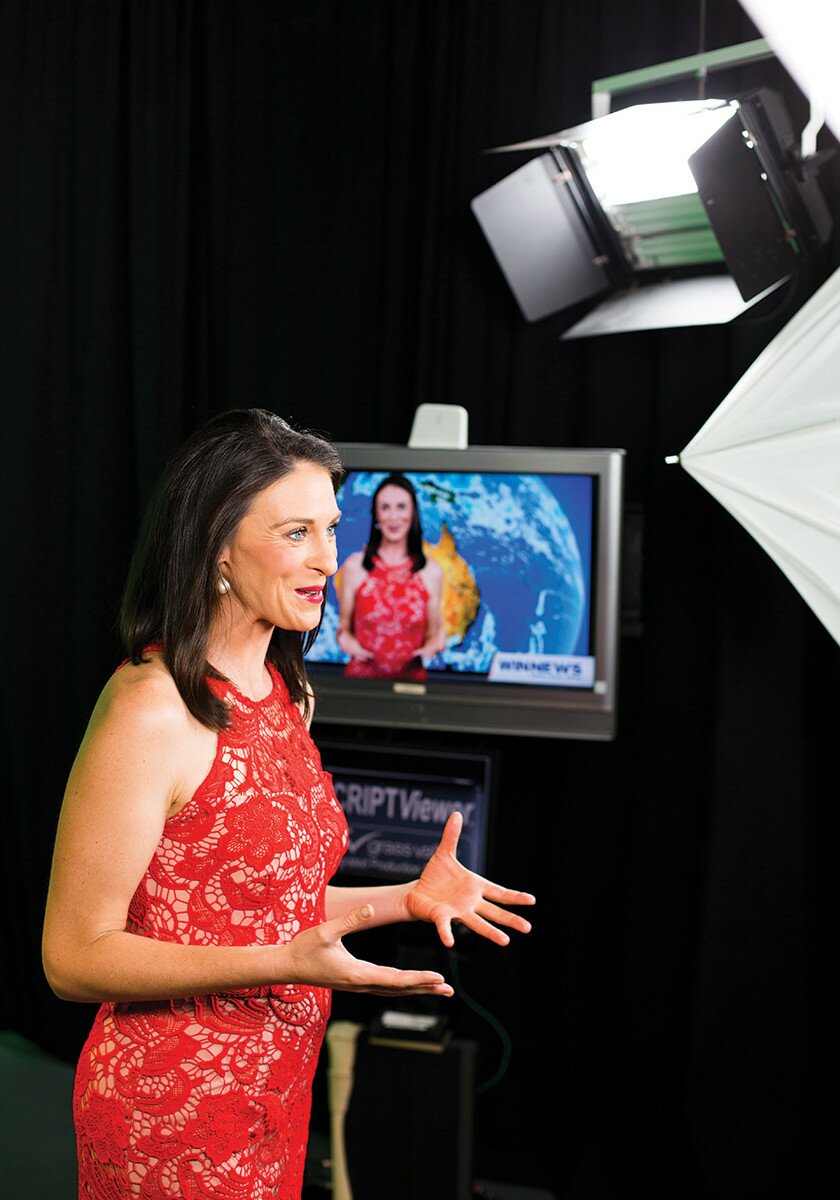 “This time of year is not so hectic but when we get into severe weather season, you need to have the most up to date and accurate information before you go to air, so you need to be constantly keeping your eye on the charts as things can move very quickly.”

Life is just as busy away from the camera for the working mum, with 16-month-old daughter Storm keeping her on her toes and baby number two due later this year.

And although she loves her new role as a mum, Hannah is refreshingly candid about the reality of such a big life change.

“I did find it a really big transition at the start,” says Hannah. “Life has changed a lot in the last couple of years. When I first moved up here I was single, I was going out a lot. You become fairly selfish and then all of a sudden you have to become completely selfless and totally responsible for another person.

“I remember when I was pregnant with Storm, thinking I would be back surfing within a couple of months. I don’t know what I thought I was going to do with the baby, leave her on the beach and say, ‘Okay I’ll be back in a couple of hours’.”

Luckily Hannah has the full support of her Canadian partner Sean, a former competitive basketball player with the Clippers, who cares for the couple’s daughter while Hannah is at work.

“We don’t have any family close by so we are a bit of a tag team, it works really well,” says Hannah.

Having ticked so many boxes in her career so far, I’m curious to discover what’s next for the talented presenter.

At the moment my focus is on being a mum. Until Storm was born, my focus was always my career,” she says.

“Presenting is a job a lot of people who work in television or journalism work towards as the end goal. I was very lucky that I got my break early on because I studied what I wanted to present, I went around it from a different angle.

“When the time comes when I am no longer in front of the camera I can do something more behind the scenes, but I think I still have a few years in me yet.”