Jacqui Wilson-Smith teeters on the precipice of city and country. While she loves endurance horse riding and painting portraits of her family, she has a killer innovative instinct; and it’s this unique combination which lead to Jacqui being named RIRDC Queensland Rural Woman of the Year.

With a handful of hay in her right hand, Jacqui Wilson-Smith walks towards the fence, “Miiiiilton, Shaaaaanika”, and up from the lower paddock trots a caramel-coloured jersey steer and orphaned foal, both of whom are the family’s loving pets.

Navigating her way carefully through the chook pen and taking me on a tour of their five-acre property at Eerwah Vale, Jacqui is on her way to work, wearing a silk printed shift dress, black opaque tights and sensible flat ankle boots – which as she points out are a necessity when living a rural lifestyle.

Jacqui has managed to perfectly craft the role of an innovative business woman with a passion for rural industries, while also being an attentive wife to husband James, and mother to 12-year-old twins Sam and Grace and 10-year-old son Max.

“I cut lots of corners, don’t sweat the small stuff,” she says honestly. 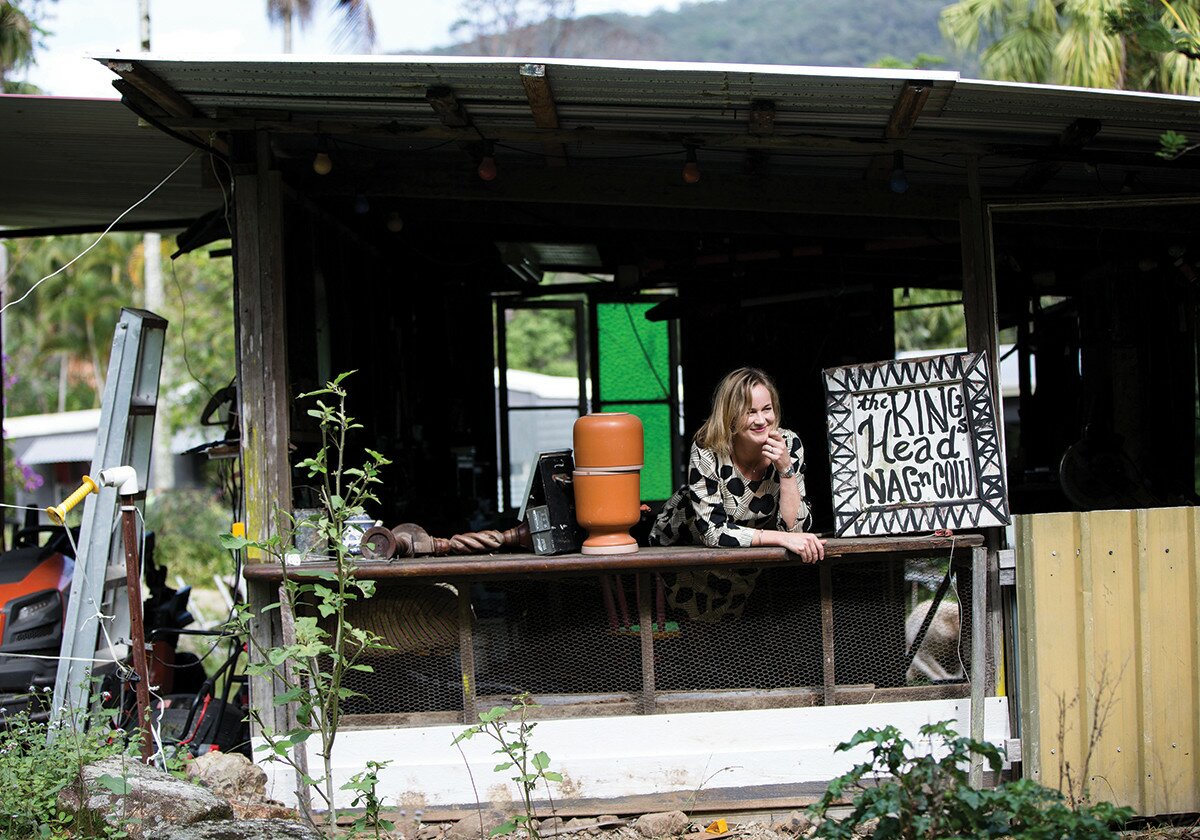 “Both of us have jobs that aren’t routine, my travel schedule changes all the time and he’s the same, so day by day we look at our diaries and say, ‘Can you do drop off? I can do sport’, and however it works out, we juggle it.”

Jacqui grew up in the Sunshine Coast Hinterland, on small hobby farms, and says her upbringing was very similar to that of her own children. They always had lots of animals (she even rode to school on a horse for one year) and enjoyed relaxed country living, while her parents had professional careers.

“I’ve always had that rural connection and a sense of adventure and enjoy being in the bush,” she says.

“When I went to boarding school in Years 11 and 12, I met proper bush kids and even though on the Sunshine Coast we were predominantly living on hobby farms, my value system was really aligned to the bush kids and I’ve always related well to country people.”

We launched this brand, with the codesign input from the consumers, in 2002. It’s now the third largest selling wine brand in the UK!”

Upon graduating, Jacqui studied commerce at the University of Queensland and went on to work for Ernst and Young in Brisbane.

“It was the wrong fit for me, but I was lucky that in my first year of doing auditing, Buderim Ginger was one of my clients and they were recruiting for a marketing officer in 1995,” she says.

“Everyone thought I was throwing my career away, I had a great opportunity to be an accountant with Ernst and Young and it was a safe and professional job and they wondered why I’d want to be marketing for a company on the Sunshine Coast, when I could be in the city.

“That was my bravest career move – I followed my heart and it was the right thing to do for me because marketing and innovation, which is the route I’ve ended up taking, has that lovely combination of being very analytical but it has room for creativity and flare.”

After working for Buderim Ginger, Jacqui moved to the United Kingdom, where she spent a year waitressing in London and travelling, before moving out to Bristol where she met her landlord and now-husband James. 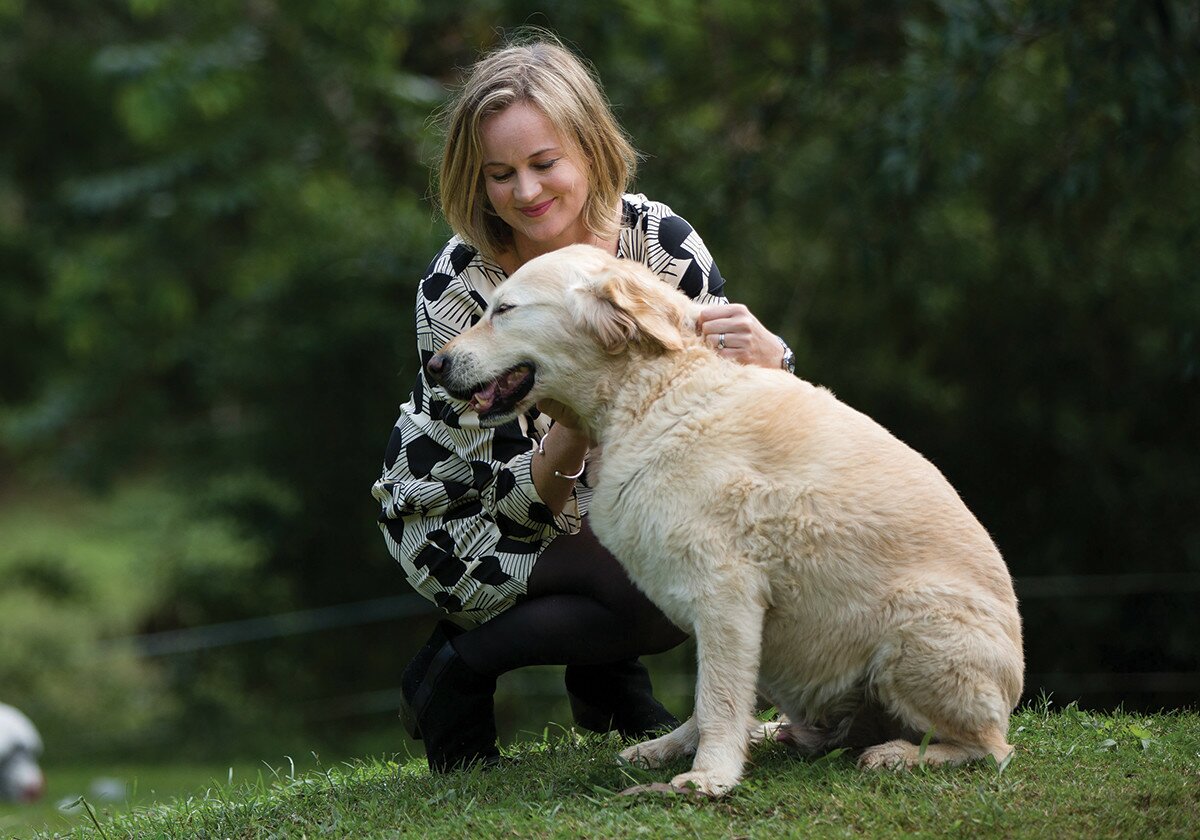 “The first job was marketing in entry level wines, no one wanted it,” she says with a laugh.

“The first project I did was a brand that was dying, called Babycham, it was a perry, a sparkling pear drink and it had been really big in the ‘50s and continued to go down ever since. I had a go of it and managed to get a 30 per cent increase through a retro repositioning.

“From there they started giving me some more interesting brands to work on, as they saw I loved the innovation side and I started going down that route.

“They had all this excess wine in California and couldn’t sell it, so we created a brand from scratch and it was called Echo Falls. With a cross functional team, we collaborated and brainstormed a whole heap of ideas and then we went and interviewed consumers. We called it Echo Falls, inspired by the waterfalls in the Yosemite National Park, which I’d never been to!

“We launched this brand, with the codesign input from the consumers, in 2002. It’s now the third largest selling wine brand in the UK!”

Jacqui then went on to look after Hardy’s Wine, which in 2004 saw Australian wines overtake the French category and Hardy’s become the number one brand in the UK.
In 2007, after almost a decade overseas, Jacqui returned to Australia with her husband, their twin children and another baby on the way.

The keys of success are having a collaborative team, great leadership, being customer-centric and being brave enough to challenge the status quo.”

“I had that homing feeling once I had the kids and I didn’t think we could give them the upbringing in the UK, and the freedom I had as a child, unless we won the lotto,” she says.

“Still wanting to have a career I thought it was going to be good to be close to my family, I missed that support network.”

James agreed to stay at home for a year with the three children, with the intention of writing a book, as he couldn’t work as a barrister until he converted his English law qualifications to Australia.

“I lined up about 10 job interviews in Melbourne, Sydney and Adelaide, because I was looking at food, wine and drinks-based companies, and everyone was very keen to see me – I didn’t tell them I was pregnant because I thought it was irrelevant given James was going to look after the children. I soon found out no one wanted to employ me.

“It put us in a bit of a pickle and we ended up living in my parent’s barn, where I opened a consultancy business in innovation and marketing and started working for myself. My first client was an agricultural-based company in Maroochydore and I was interviewing farmers from all over Australia who were using silage, and I was doing this from my hospital bed after I had Max.” 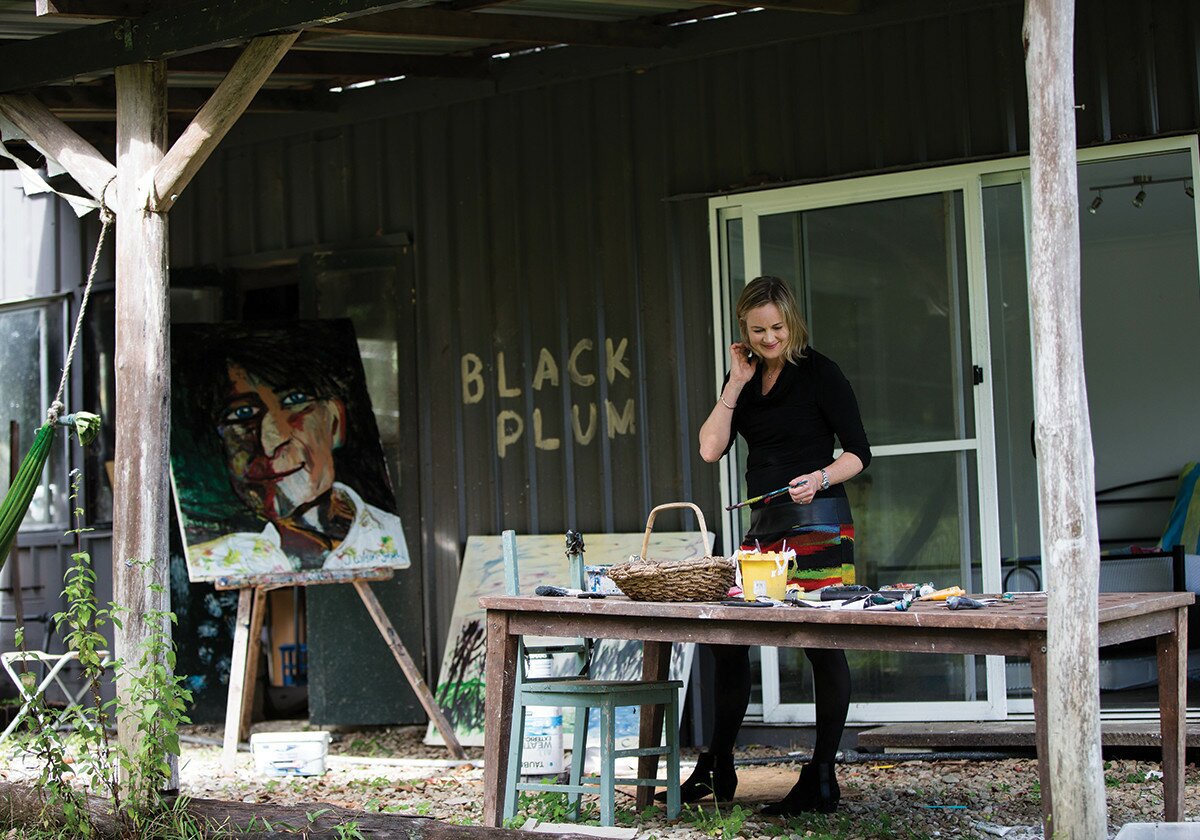 With three kids under the age of two, Jacqui and James did anything to bring money in, she continued running her consultancy business and James went into real estate.
“They were the early years and the years that made us stronger, but it was hard trying to make ends meet,” she says.

“Being a consultant, you never know when the next job is going to come up, and I found that stressful because for 10 years in my life I was so used to having a job where I’d have a regular paycheck.

“So I knocked on the door of Gourmet Garden and asked if they needed a marketing and innovation consultant.”

Jacqui’s timing was impeccable and she began working there full time in 2009.

“During those eight years, one of the most exciting things we did was launch the lightly dried herbs and spices, we spent so much time with consumers finding out what their problems were with herbs, and we asked what the problems were with our herbs in tubes and that was a really hard question to ask, but a really good question,” she says.

From 2009 to 2017, Jacqui has helped the Sunshine Coast business more than double its growth, and has seen it boom in the international market, now over 65 per cent of its sales are in exports.

Much of the success in launching new products, Jacqui says, is a result of the design-led thinking process – an iterative process of observing, defining the failure points, ideating and testing in the marketplace and continuing to go around that circle.

“The keys of success are having a collaborative team, great leadership, being customer-centric and being brave enough to challenge the status quo,” Jacqui says.

With almost 25 years experience in innovation and marketing, Jacqui wanted to do more and co-founded the Food and Agribusiness Network in November 2015.

“The idea that there needs to be a cluster group came out of the Regional Economic Development Strategy, from Sunshine Coast Council, which identified a gap and myself and a few other industry colleagues co-founded FAN,” she says.

“We want to actively contribute to doubling the region’s food and agribusiness economy by 2030 and we want this region to be renowned for its food culture and innovation in agribusiness. 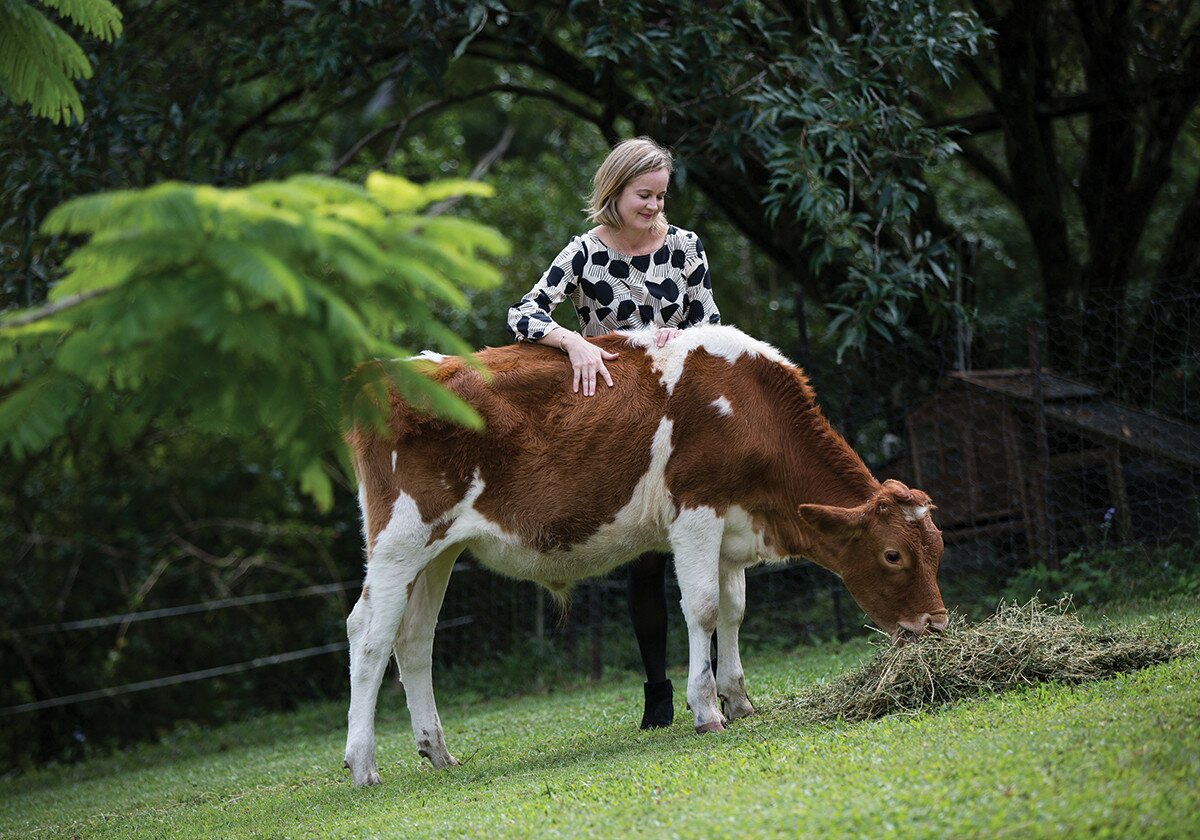 “Agriculture is one of the least mature industries across Australia when it comes to technology. Technology is imbedded in so many other industries, but in agriculture it’s still very early days, so it’s a great time for startups or scale-ups to think about how they can identify opportunities in ag-tech.”

FAN has since reached out to farmers, chefs, value adders, food processors, retailers and distributors to find out what has been missing from the industry, and the answer was, “good old fashioned networking, sharing and collaborating”.

Earlier this year, Jacqui was named the RIRDC Queensland Rural Woman of the Year, and with her $10,000 bursary winnings is launching a FAN online learning platform to enable the creation of virtual communities where rural businesses can collaborate, learn how to speed up the pace of innovation, reduce risks and create business growth.

Farming is very isolating and they learn to become independent, but imagine if they could help each other out. In times of need, they’re always the first ones there, but they’re always the last to say they need help. Let’s try and get the collaboration going before there’s a crisis or a catastrophe,” she says.

“Of the proportion of businesses that are innovation-active, agriculture is one of the lowest in Australia. Compared to other parts of the world, Australia is benchmarking poorly when it comes to collaborating, so there’s an opportunity for agriculture, as well as Australia nationally to think about working together more, which is why I believe networks are important, it’s just about getting some proof behind it.

“I’d also love to see more females in agriculture, according to a study by KPMG, only 23 per cent of Australian people working in agriculture are female.”

The pilot program for the new online training platform is design-led thinking and innovation and Jacqui is using Gourmet Garden’s new innovation, Meat Finishing Drizzles, which launched last month, as the case study.

“We’ll be documenting the journey and showing the design thinking process, sharing our failures and learnings along the way, hosting webinars and turning it into an educational tool for other businesses,” she says.

Jacqui lets out a deep breath as she closes her laptop, she’s worked fiercely to reach this point and has no intention of failing now.