Out of the box architecture and a stunning rainforest backdrop is the perfect setting for this breathtaking home at Verrierdale. Its retractable roof opens to reveal a tent-like canopy that allows the family to feel like they are literally living outdoors. Glamping anyone?

Imagine lying in bed at night gazing up at the stars, glass walls that disappear to allow the natural breezes and sounds of the idyllic bushland in. That dream became a reality for local couple, Nick and Nicole New, who built their dream home on 15 acres at Verrierdale, just 15 minutes from the beaches of Noosa, last year.

Working with revered Sunshine Coast architect Dan Sparks, the couple initially wanted a home that was light, bright and airy, with room for their two children, Oliver, 3 and Florence, almost 2, to grow and enjoy the bushland surrounds. But after a meeting with Dan, they fell in love with his innovative plan for something much more special. 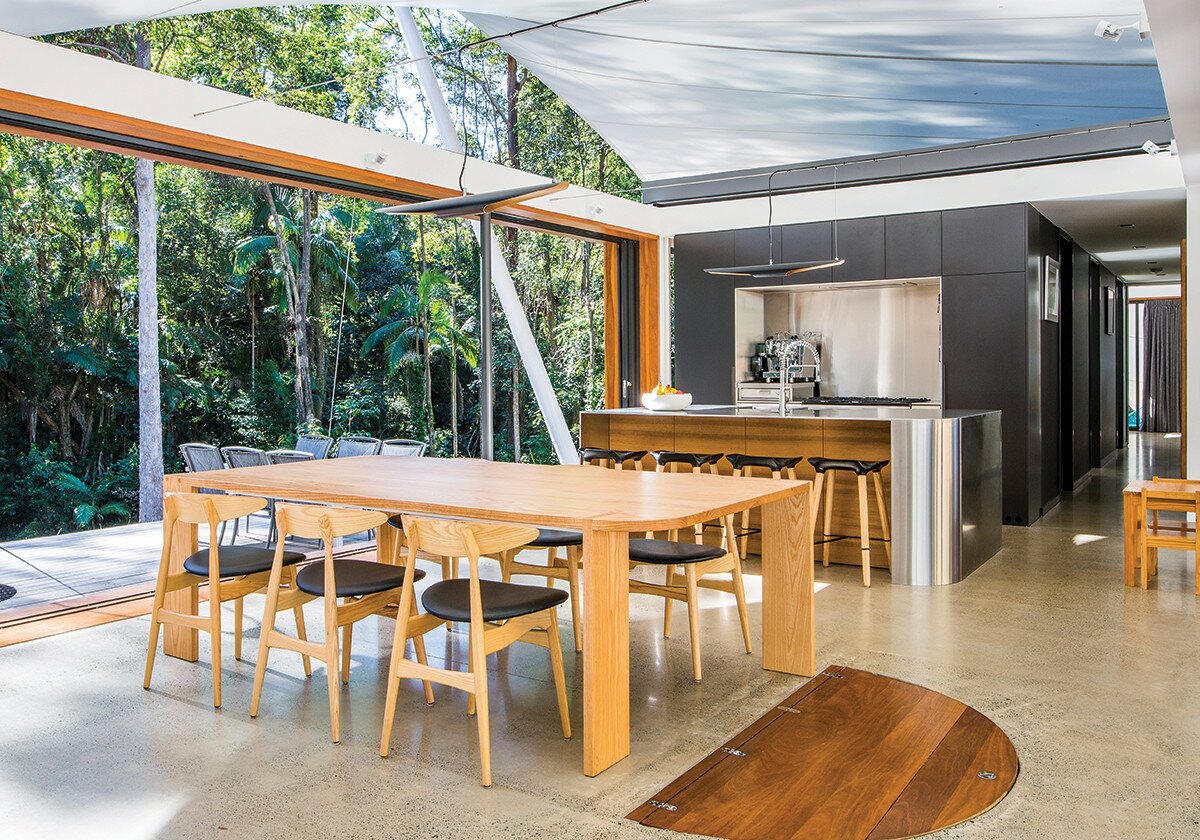 “We initially wanted an airy three-bedroom home with lots of natural light so we didn’t have to turn the lights on during the day,” says Nicole.

“We wanted an open-plan living area and a central kitchen where family and friends could perch themselves while we prepared meals and entertained and we wanted rainforest views from all the bedrooms.”

What they didn’t expect was a home that not only ticked all their boxes but essentially brings the outside in, allowing exceptional connection with nature.

“We met Dan out at the block one day and showed him the site, and he came back six weeks later with something really unique and special,” says Nicole.

“Initially he presented us with a pavilion-style house and then he drew us the plans of a tent house with a sliding roof, which was nothing like what we had imagined. 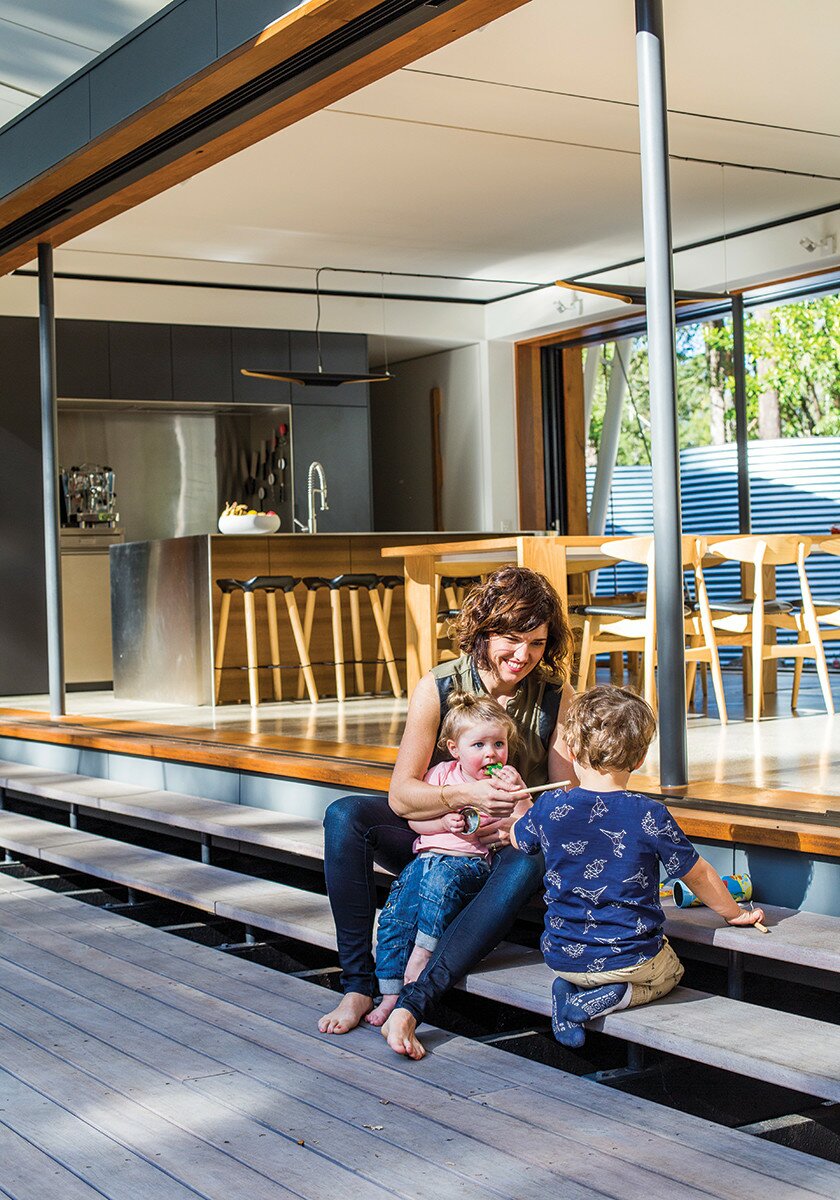 “To be honest, at first I wasn’t too sure about the design, but when Dan explained it to me and I could visualise it we couldn’t let it go. In the end both Nick and I became emotionally invested in the roof.”

Built by Jaicon Construction, the modern home itself is a simple low pavilion-style design, which is the perfect juxtaposition to the soft curves of the cloud-like structure above.

Dan had previously only used this type of structure in commercial projects like shopping centres and sports stadiums. Made from material manufactured in France, engineered in Australia and put together in the Philippines, the five hundred square metres of taught translucent fabric is most impressive and the talking point of anyone who visits the home. 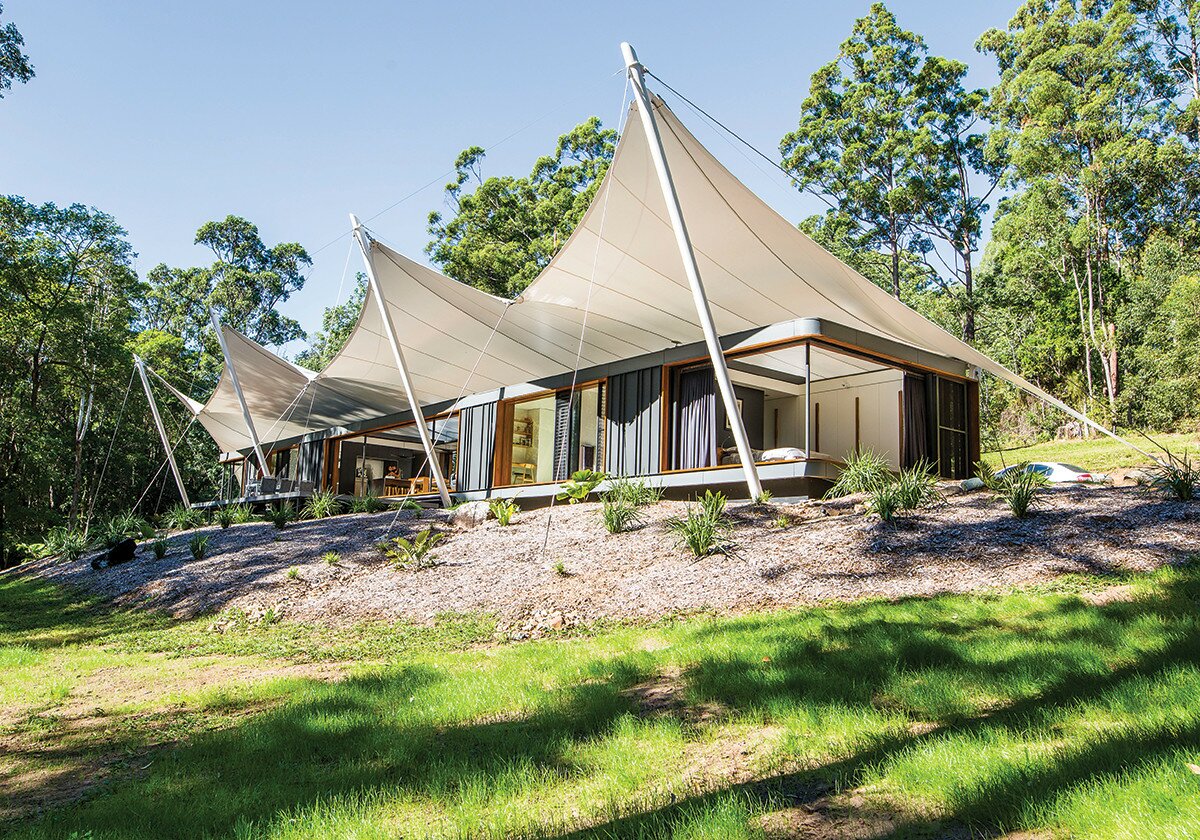 Inside, the rich timber reveals made from trees from the land are a standout feature and floor-to-ceiling glass windows open right up to let the outside in.

The living area opens up to a huge timber deck. With views of the stunning rainforest, it’s the perfect spot to entertain family and friends.

The understated neutral colour scheme and stone flooring perfectly complements the modern, minimalist feel of the interior. In the kitchen, the oversized stainless-steel bench is a show stopper as are the beautifully-designed bathrooms complete with quality fixtures and fittings.

Not only does the home transcend the boundaries of traditional architecture, its functional design allows the family to enjoy the best of all seasons. 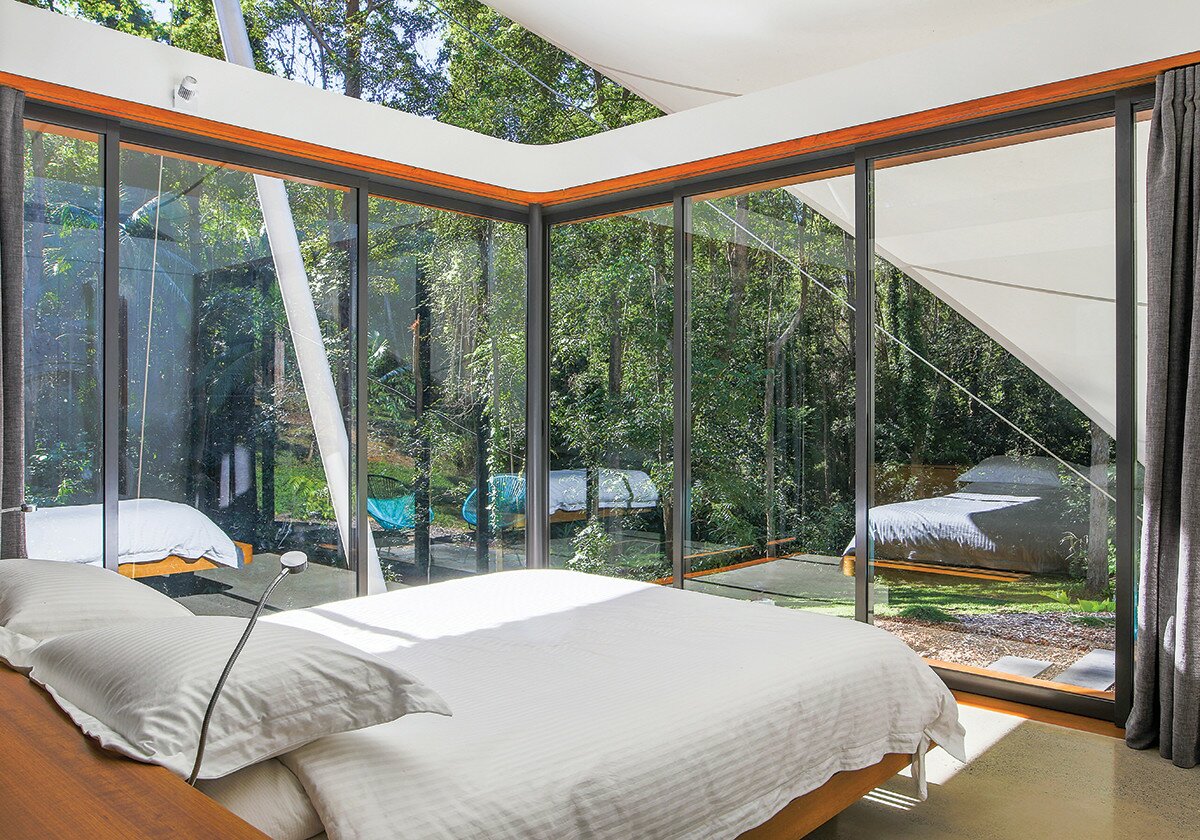 “The house is really functional,” says Nicole. “It allows the breezes in during summer and in winter the sun penetrates the concrete slab warming the whole house up.”

And although Nicole loves everything about the home, the kitchen and living area is one of her favourite spots.

“It’s the central area of the house, when you open the roof and slide the doors back and just look out to the beautiful rainforest, it’s just magical,” says Nicole.

“Oliver and Florence love the freedom of the land, they go exploring around the house and in the bush. We have a little tree swing and they have all their little gardening tools and I can still see them from the house.

“Sometimes I have to pinch myself that we live here, I just love it, it’s a dream come true.”