For most people, packing up their lives to follow their dream is a prospect too terrifying to even consider. However, clothes designer Jocelyn Horner is proof facing your fears can pay off, with the daring pursuit of her passion for fashion securing her a place in the spotlight at this year’s Sunshine Coast Fashion Festival.

Fashion has the power to transform people, capturing imaginations and boosting confidence in a subtle way that many may not even realise.

Whether it’s the twirl of a skirt that makes you feel like a princess, or a bold outfit that makes you stand out from the crowd, there’s a reason women spend thousands of dollars a year on their wardrobe.

For Jocelyn Horner, her fashion ‘transformation’ was one that changed her life.

Sitting in her Brisbane-based office in the middle of the bustling city just over two years ago, Jocelyn decided her life was in need of a makeover. At 29 years of age, she had lived in Brisbane surrounded by family and friends since high school and held a secure job working in human resources. But for Jocelyn there was something missing, and her creativity was itching to be unleashed.

It was then that she made the bold decision to uproot her entire life for the unknown, quitting her job and trading the security of her life in Brisbane for the chance to chase her dreams in the creative hotspot that is the Sunshine Coast. 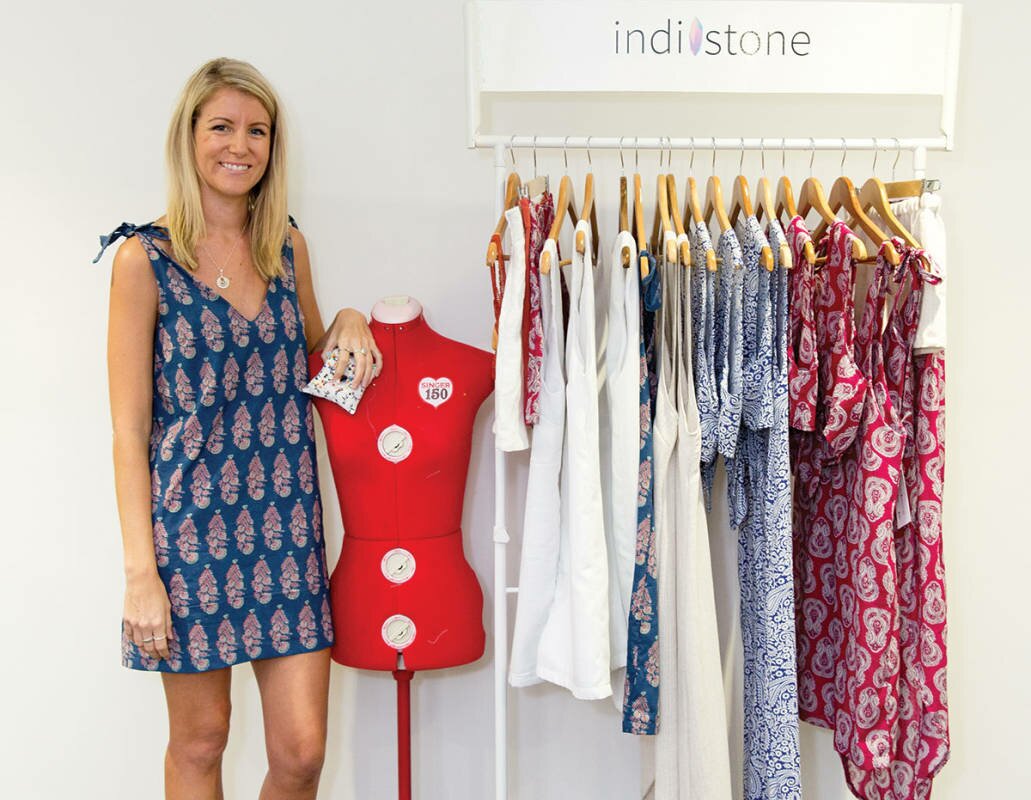 It’s been daunting being 30 and having a lot of my other friends buying houses or starting families while I’m just starting my new career, but it’s what I want to do and you never know if you don’t try.”

“I just knew it was what I wanted to do,” says Jocelyn.

“When I decided I wanted a career change – a life change, an everything change – I decided to move to the Coast and pursue my dream to be a fashion designer.

“The Coast is a really inspirational place and there are a lot of like-minded creative people, so it’s a good place to start – everyone’s been very supportive and they’re always willing to tell you all of their inside secrets and help each other.”

Nearing the end of her two-year advanced diploma in fashion design at TAFE Queensland East Coast last year, Jocelyn knew she wanted to jump straight into doing what she loved most and took advantage of her final assessment to pick the brains of her teachers to create the first collection for her very own label.

Released under the banner of Indi Stone, the Talula collection originally consisted of five outfits she describes as ‘boho luxe’ that reflect the laid back, yet trendy, style of the Coast.

“I wanted to design a label that was relevant to local girls – something that suited the Coastal lifestyle, made of cool, light, flowy fabrics,” she explains.

“It also needed to be something that’s easy to throw on over a bikini, but able to be dressed up to be worn out as well.”

The result was good enough to capture the attention of industry experts, earning Jocelyn a six-month mentorship with local ethical and sustainable label Sinerji and most impressively, a scholarship with the Sunshine Coast Fashion Festival, which will see her collection showcased on the catwalk among the likes of Nicola Finetti in October.

“It’s been a great learning experience so far and hopefully in the future I’ll be able to be part of more big things like this,” says Jocelyn. 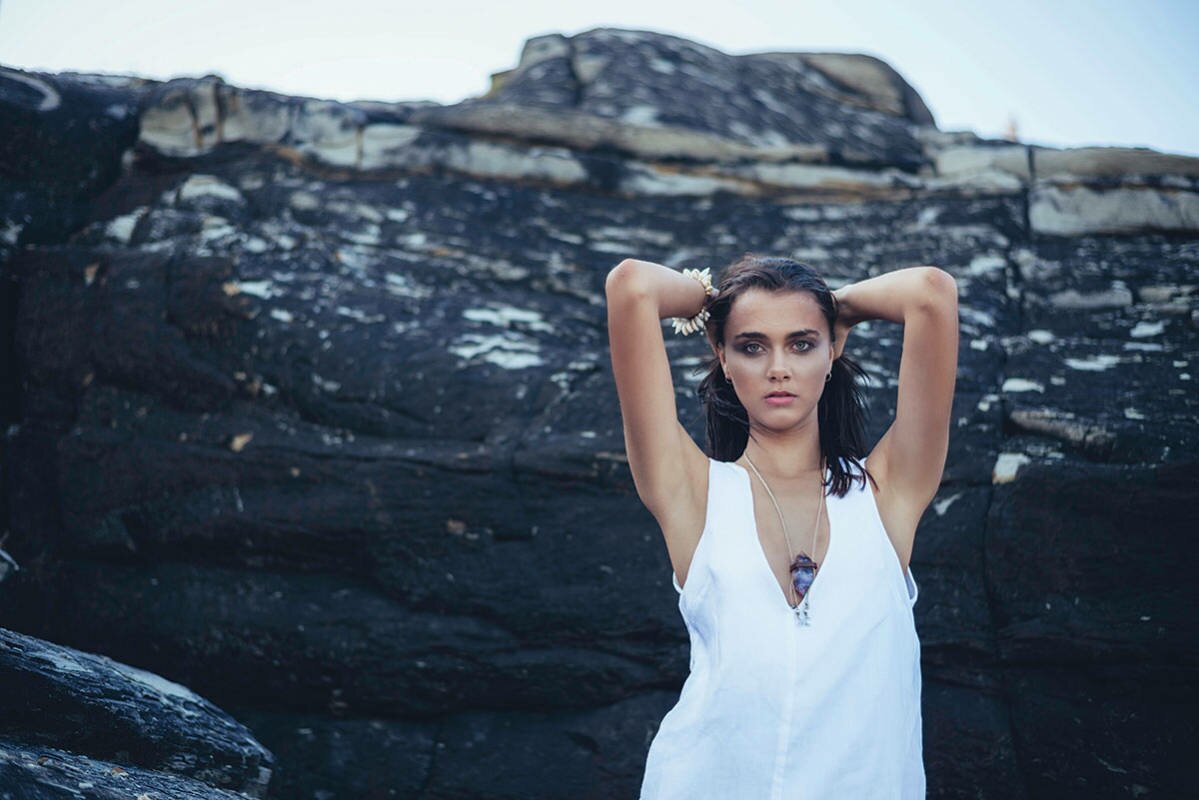 If you keep going it will be worth it, something will come of it.”

“There were a few times over the last few years at TAFE when I wanted to quit because it was just too hard. The class dropped from around 30 girls down to four after the first year, so it wasn’t just me. But something just always pushed me – it’s like there was something saying in the back of my head, ‘If you keep going it will be worth it, something will come of it’.”

Currently working out of a small home studio in Warana, Jocelyn has now expanded Talula to include 10 outfits, and is now feverishly working on her second collection in time for the next spring/summer season – a far cry from the corporate woman, with zero sewing experience, that she was just over two years ago. As she sets about explaining the process behind it all, she makes it clear that it’s far from glamorous.

“I get my inspiration, whether it be colours or places, and I draw up a mood board, and from there I do up my designs. I might start with 100 designs and then cull them down to 10. From there it’s a matter of making the patterns and then doing up a toile (a scrap material draft).

“Then once I’m happy with all of that, I find my material and make up the final products. So it’s quite a long process if you don’t get it right the first time,” she laughs.

“You might have something in your head, but once you find the fabric it might completely change your original design, so it’s just a matter of chopping and changing and being okay with having lots of changes throughout the process.”

Despite her growing success, Jocelyn remains grounded, standing firmly behind her beliefs in applying ethical, sustainable practices in her work.

“I think that as designers, we have the opportunity going forward to put a stop to some of what has happened in the past,” she says, referring to the overseas sweatshops that have caused so much controversy in the industry.

“Being so small at the moment, I’m able to control where my fabrics are coming from, who’s working for me, what conditions they’re working in, the pay they receive and their hours. Going forward as I expand, I know I will have to look at manufacturing on a larger scale, but that will always be an important part of my manufacturing.”

While her star may still be on the rise, there’s no denying she has already achieved some impressive credentials in the Sunshine Coast’s fashion industry.

For Jocelyn, there’s nothing more rewarding than pouring time and effort, along with her heart and soul, into her designs and knowing there are people out there who are willing to pay to wear them.

But while her daring decision to leap into the unknown to follow fashion might have started her career, Jocelyn credits her family and friends with giving her the confidence to chase her dreams.

“It’s really important for anyone going into fashion to have a good support network. People who, when you feel like you want to give up, will give you the encouragement you need to keep going if that’s what you really want to do.

“It’s been daunting being 30 and having a lot of my other friends buying houses or starting families while I’m just starting my new career, but it’s what I want to do and you never know if you don’t try.”