As the shift towards holistic health continues to grow, there is an increasing amount of options available to people looking for more alternative, natural approaches to healing. Tayla Arthur chats to Kaatheryn Tempest and Denver Vidler, to uncover how using crystal grids and energy can free people from the illusion of limitation.

“I was seven when I knew I was different and things weren’t as they seemed,” says Kaatheryn Tempest.

“I felt like a misfit for a long time because people couldn’t really understand me, so when I was 19 I really started searching to figure out why I could do certain things and why I understood things in a particular way.”

Kate, as she prefers to go by, is the founder of The Awakened Healing Space – a business with a mission to “free others from the illusion of limitation by connecting them consciously with their sovereign spiritual signature”. This assists people in becoming psychologically, emotionally and spiritually independent.

It’s a project she started back in 2010 and now runs alongside Denver Vidler, with the pair working together to offer a range of alternative healing solutions.

“We’re holding an open space for people to explore who they are,” explains Kate.

“People who come to us learn to identify themselves beyond their culture or their belief system that may have been generationally given to them by their family.

“We’re all sovereign beings – we’re all the boss of ourselves. We are spiritual beings, we have a body and a mind and we have consciousness.  In our work, we call consciousness our Sovereign Spiritual Signature. Our mission is to assist people to become aware of their sovereignty so they become empowered and free and experience themselves from a higher perspective.”

The Awakened Healing Space focuses on freeing the minds of others primarily through the use of trans sovereign DNA activations, intuitive counselling and the power of crystal grids.

Conducted over three weeks, Kate explains that the DNA activations are a matter of awakening the consciousness and releasing anything that’s holding the person back, with most of her clients looking to end generational cycles of abuse, put an end to their depression, or stop particular behaviours that are impacting their lives.

“A lot of the work we do clears the generational timeline, so anything that’s been handed down through the energetic DNA, like particular behaviours or belief systems or genetic patterning, is cleared with the healings so they can actually be free of that,” says Kate.

“DNA activations clear the metaphysical, which is what a physical ailment is being expressed from – it’s either an emotional or spiritual congestion,” adds Denver.

Kate and Denver also create crystal grids that, while beautiful, have an array of applications they say are based upon the concepts found in epigenetics, sacred geometry, quantum sciences and metaphysics. 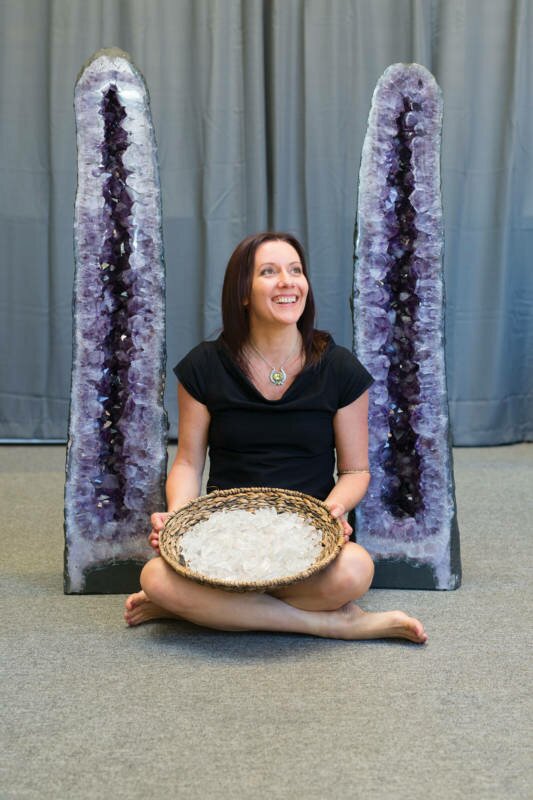 People who come to us learn to identify themselves beyond their culture or their belief systems, enabling people to create acceptance and peace within their lives.”

Denver, who has a strong science and engineering background, coupled with a broad spiritual knowledge, explains that the grids work by using the crystals to resonate a particular frequency, creating a portal or energetic point of singularity that draws negative energy in and filters it out as clear frequency.

“It’s like an energetic alignment tool. We’ve noticed in our grids, when we put crystals together that aren’t in harmony, they’ll turn away from each other and if they are in harmony they’ll stay aligned, and we had the same results when we experimented with human interaction – when you’re with someone you don’t know, you can feel really connected with them, but for other people you can feel like, ‘I don’t know what it is, but I’m clashing with this person’.”

The pair has designed grids from a variety of crystals and geometric patterns for homes and businesses to great effect, including Allied Health Practices and Healing Centres, with different geometric patterns able to remove unwanted energy and create more harmonic or dynamic environments.

“We use the PHETT grid (pictured), which was developed by us for land and house clearings. The combination of sacred geometry and the angle of the grid, which is the same angle as the giza pyramid, act as a focus point for the clearings.

“It’s a fairly natural thing to do – the indigenous used to do land ‘clearings’,” says Kate.

“People don’t realise this, but atomic clocks and precision electronic circuitry use quartz crystals as a main resonator to stabilise the frequencies. And that’s essentially what we’re doing with our crystal grids.

“Once upon a time science and metaphysics were two worlds apart and they’re now coming together. And rather than being this airy-fairy rainbows and unicorns stuff, it’s actually quite grounded science now.”

It’s fascinating to hear Kate and Denver explain their practices – ones that many people, myself included, have never heard of. But sitting in their presence, surrounded by crystal grids, I can actually feel the energy they speak about, and it’s a mind and eye-opening experience.

“When people come to us, they’re coming to meet themselves in many ways,” says Kate.

“What we hope to achieve is to give people an awareness that these things are here for them to explore.”