It’s been a bumpy road at times for Sunshine Coast Young Business Woman of the Year, Angie Mansey, but this kind-hearted, car-loving superwoman has a knack for turning a difficult situation into a positive change for herself, her family and the local car community.

Angie Mansey has taken on more roles in her young life than most of us will ever achieve in a lifetime. With an intrinsic desire to care for people, she got into nursing and specialised in dentistry bone grafting and implants. All the while with her diesel mechanic partner Luke and son Rhylie by her side.

It wasn’t until her second son, Corbin, came along in 2011 that Angie had to start looking at life differently.

Corbin was taken away for surgery the minute he was born. They discovered that he was the only known person to suffer from a combination of two life threatening conditions, VACTERL association disorder and biliary atresia.

“He’s had 23 surguries to date, he’s been resuscitated from flat lining six times, in the first year of life he was only home for 10 days, the rest of it was in intensive care. We’ve had a few blood transfusions, lumbar punctures, we’ve said our goodbyes three times, we’ve been airlifted in helicopters and planes, and had way too many ambulance trips,” she says. 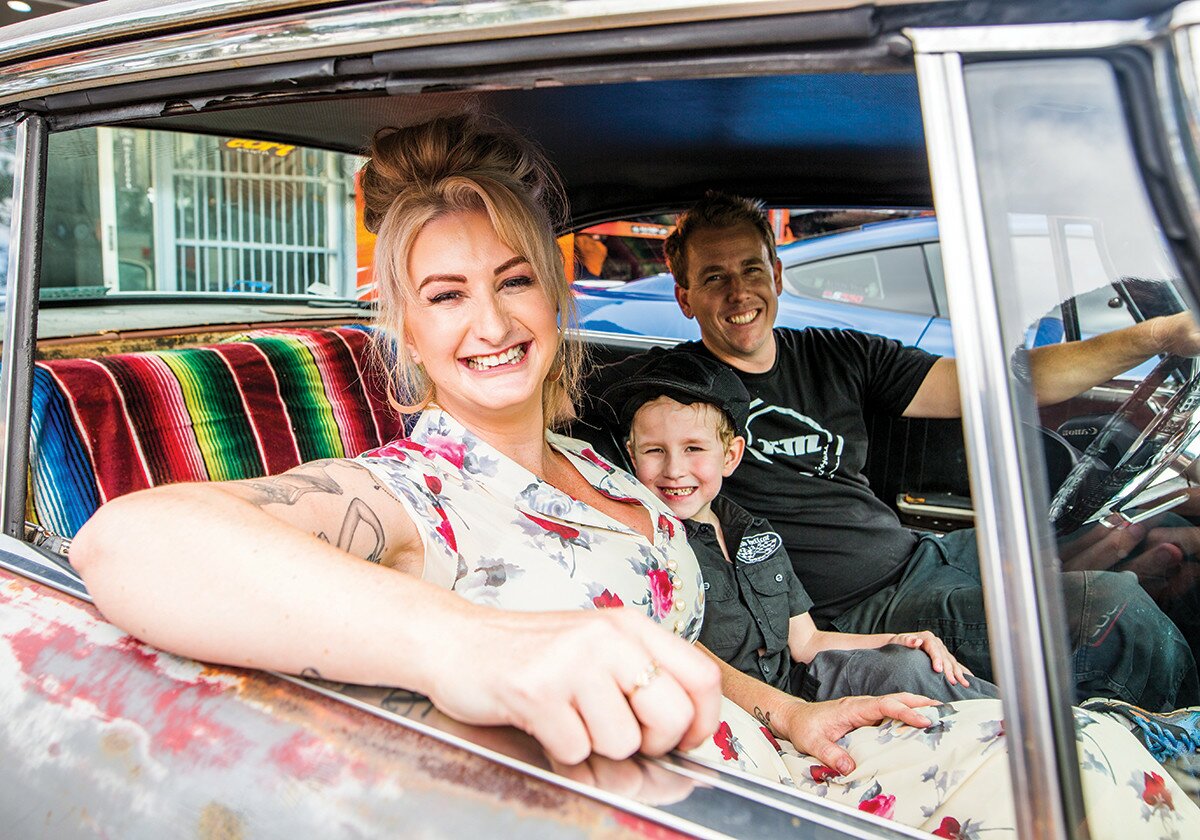 “For his first birthday he was actually in surgery but we were transferred down to Melbourne where he was put on the liver transplant list. He’s off the transplant list now, but there is no prognosis.”

Corbin also suffers from a range of other illnesses that have been brought on by the multiple operations and long periods of life support. He’s fed through a tube in his stomach, has the rarest blood type and has a weak immune system due to overexposure to hospitals and antibiotics.

But Angie stresses that this isn’t a sob story – she is a positive, strong and determined woman who has not let Corbin’s prognosis limit the way she and her family live.

On the plus side he is generally a happy little boy who doesn’t live in pain and has no disabilities as such to speak of. Even as a mother of a child who is medically compromised, I don’t think there’s anything wrong with him, but of course, it’s pretty petrifying what is,” she says.

Angie and Luke have since welcomed two more beautiful, blonde baby boys into their family, three-year-old Dash and two-year-old Ace.

Today Angie is not only a mother of four, but a carer, business woman, wife, philanthropist and active member of the community. While she has always been a hard-working person, she never thought she’d end up in the situation she’s in now.

Two years ago, when Ace was just six weeks old, Corbin’s liver failed, and Angie and Luke had to make some drastic decisions.

“Because I worked the whole time to pay for the medical bills and expenses, we needed to make a change. So we quit our jobs, invested in Kuluin Mufflers and opened the doors,” she says.

The business didn’t come about under the greatest of circumstances, but in true Angie style, she made the best of the situation. 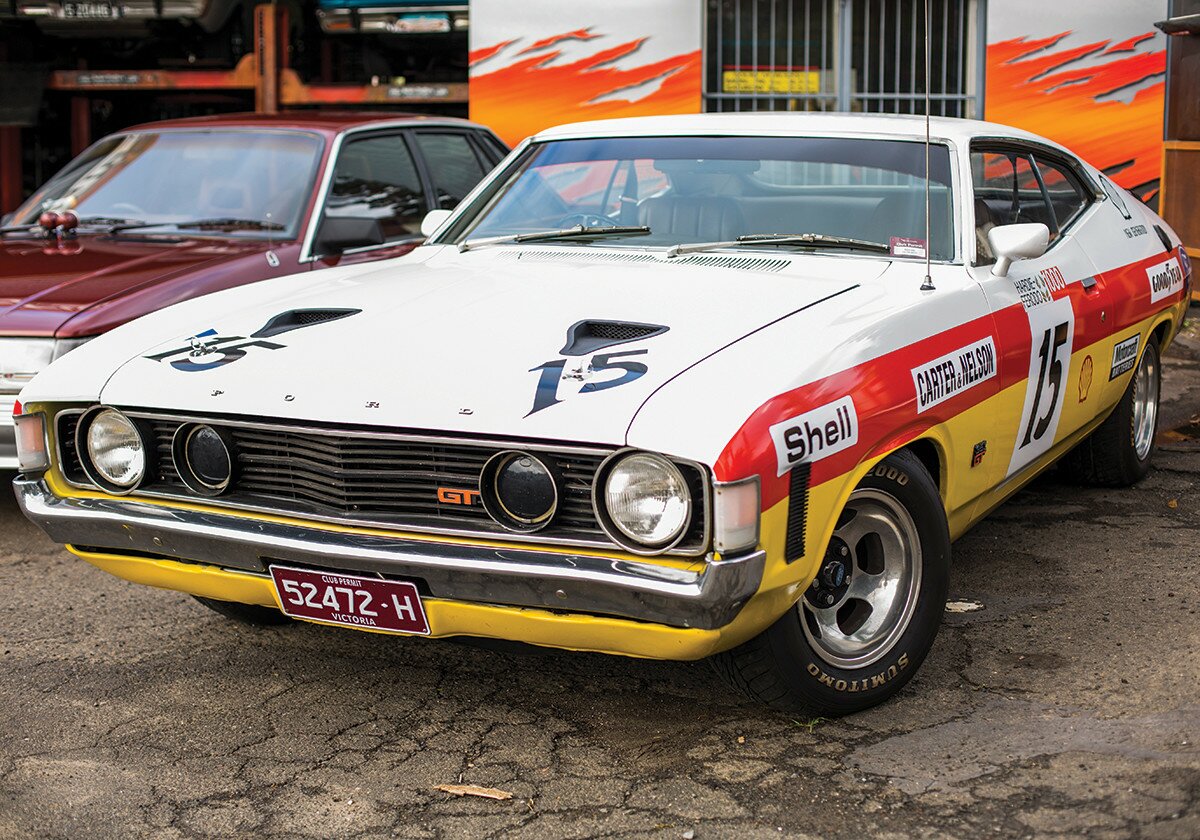 Not only has Kuluin Mufflers seen tremendous success in just 18 months, with their own line of mufflers and custom made KM exhaust systems available Australia wide, they also own a retro style coffee van with their own range of cold pressed coffees, merchandise that sold out within 24 hours of launching, and they sponsor all of the major car clubs in south-east Queensland.

“For the first eight months, I brought all three of my children in every single day until we could work up enough to afford day care. I juggled them with big professional meetings with motor companies and no one batted an eye,” she says.

Charity has also been something incredibly important to Angie, donating her time, money and effort when she can.

We’ve just been very lucky that we’ve had a lot of people in the community help us throughout our journey with Corbin. We’ve really always wanted to give back to the community and I think that everybody has a role to play,” she says.

Angie discovered early on that she had the confidence to speak about her situation, and has used her story as an example to motivate others. Wishlist, Give Me Five for Kids and more recently, causes tackling male suicide and depression such as Cars For Hope, are her chosen charities.

“Within the first three months of starting, we noticed there were a lot of young car clubs on the Coast,” she says.

What they discovered was a tight knit community coming together over a shared passion. At one of their car meets, Angie had a young man say to her that he lost six friends to suicide since he left school. One of those six young men was a friend of Angie’s who took his life a few months after Kuluin Mufflers opened.

“You couldn’t have seen it coming. That was horrific to us because he was right there in front of us. Maybe, just maybe, if he was part of something…” Angie trails off. 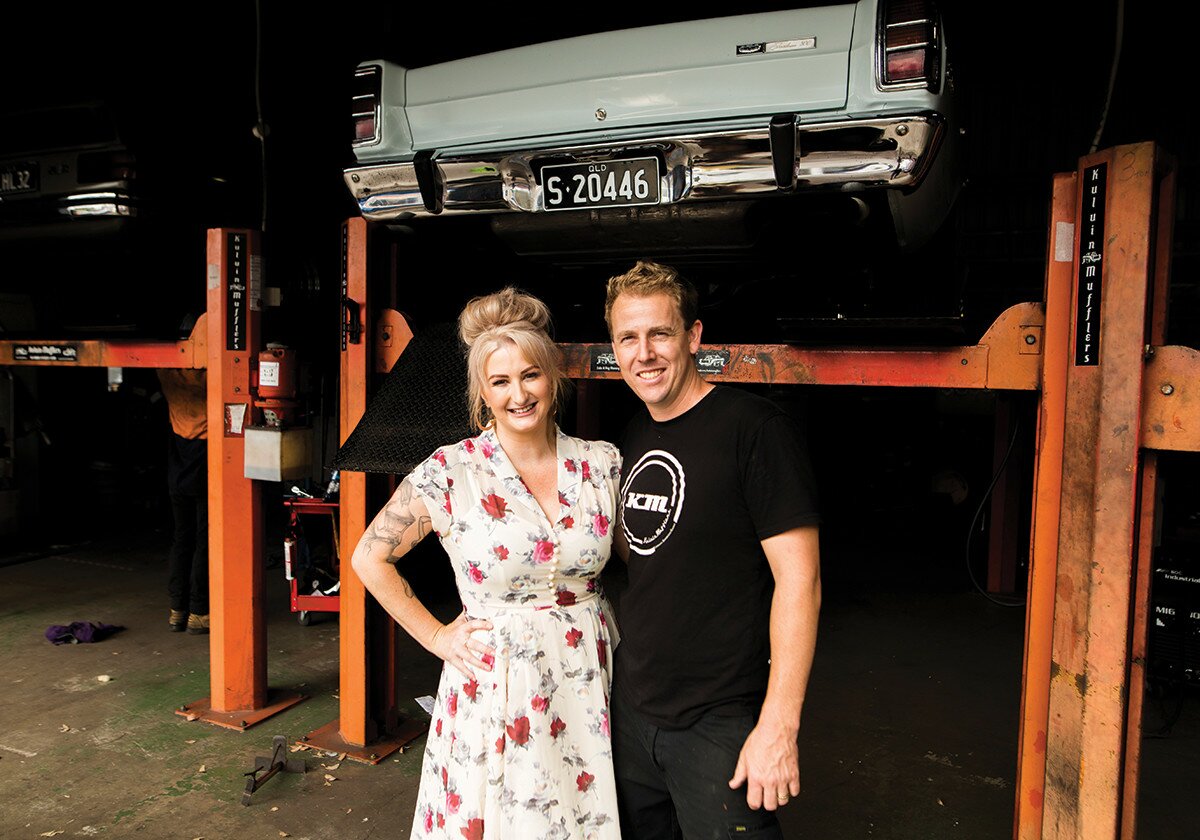 “Then we realised we had this audience of young kids. I don’t think that we are doing anything drastic but I just can’t sit there. I think something needs to change. I don’t know what it is, I would just like them to know that if there’s ever an issue they can turn up.”

Angie and Luke offer a safe space to men of all ages to come in and be a part of something bigger.

There are always amazing cars on the hoist, it’s a great distraction, you don’t need to talk, we know you’re here, and we won’t ask you any questions. Just know it’s a safe place,” she says.

All of Angie’s work in the community has not gone unnoticed. This year she won Sunshine Coast Young Business Woman of the Year.

“The award was a massive surprise. We had an incredible night, received a standing ovation, then got a mention in Parliament.”

Now with a nomination for Business Person of the Year and Business of the Year, Angie is excited for what’s next.

“This is a passion. I’m a mum of four and my family and children will come first, I live and breathe for them. But to be able to have something that I can be really passionate about makes me feel a little bit more than someone who’s been put into a sort of stereotypical role. It’s a nice way to continue with life as normal.”