The effervescent Judi Barrkman has one of those infectious personalities that could light up any room. So it’s quite fitting that the woman with the bright and bubbly nature has designed a range kaftans with equally as vibrant qualities.

Kaftans are only a small part of Judi Barrkman’s story, albeit a fitting symbol for the journey she’s taken. She’s travelled the world, worked in a range of different jobs, from cigarette girl to wedding co-ordinator. But it’s the most recent bout of health issues that have impacted on Judi’s life the most. She doesn’t let it define her; today she’s a beaming ray of positivity with an incredible story of discovery to tell.

Born in Brisbane, Judi grew up in a creative family with two sisters who were eight and 10 years her senior. Judi’s parents separated when she was young and she grew up with her mother who ran a bed and breakfast in Clayfield. After school, she moved to Sydney and worked in advertising for a few years before heading overseas in her mid 20s where her two deepest loves were realised; travel and hospitality.

I got a job at the Golders Green train station in London cooking for all the bus and train drivers. I got a real thing for cooking and I always wanted to open a café, that was kind of my dream,” she says.

But it wasn’t until Judi scored a job rubbing shoulders with the rich and famous as a cigarette girl at the renowned Quaglinos restaurant that she discovered the best job of her life.

“I literally walked about in a black velvet outfit with a tray selling cigars and cigarettes. It’s a really posh, full on restaurant with lots of famous people, and it was a real novelty because the venue had been there since the ‘30s. I met Princess Diana, Sylvester Stallone, Annie Lennox, Gillian Anderson, Roger Moore.” 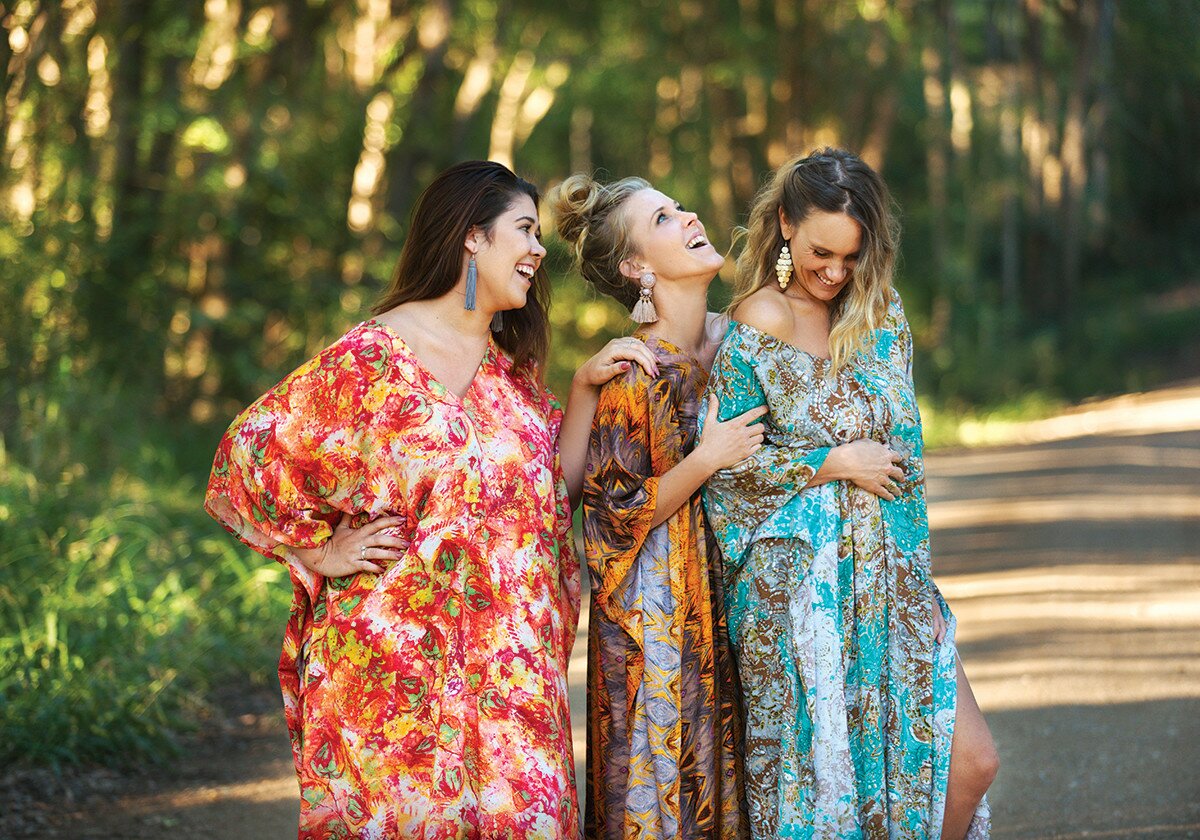 “That’s what I always wanted to do. That was the dream and it was amazing. I was at the café in Melbourne for five years and had a blast, living the dream,” she says.

Eventually Judi made her way back to Queensland when love saw her move to the Sunshine Coast, where she’s been ever since.

In 2013, Judi went for a routine pap smear and her doctor decided to do a breast examination.

My father had just died from cancer a month or so beforehand in Sydney, so that had been very traumatic. My GP found a lump, so I had my mammogram and the results came back as highly suspicious of cancer.”

With no history of breast cancer in her family, Judi anxiously undertook a biopsy and a fine needle aspiration. What followed was a very traumatic and suspenseful period for Judi and her family. The biopsy came back clear but her surgeon was still suspicious of the lump. They operated and found there was cancer all through Judi’s left breast.

“Luckily it hadn’t exploded out of the ducts yet – they got it really early. So the treatment was to have my breast removed.”

On top of the breast cancer, Judi had suffered from a hereditary kidney disease her whole life.

“I was 21 when I picked that up. Mum decided that she didn’t want us to know from a young age that we would possibly have this disease because she thought it would change things for us. She wanted us to just live free from it for as long as possible,” she says.

Due to impending kidney failure that doctors had suspected Judi would suffer from in her 60s, she made the decision to have both her breasts removed. 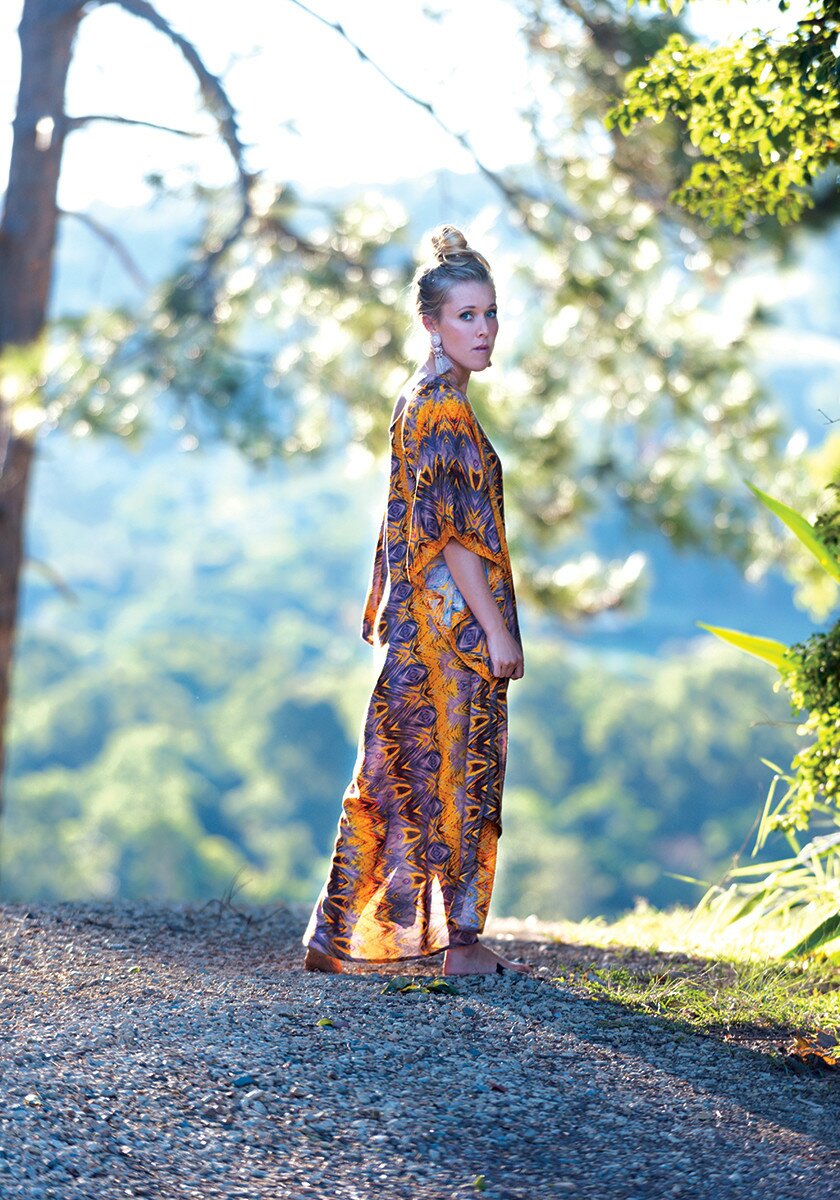 “So the decision to have them both off was partly based on the kidney disease because they won’t transplant you within three to five years of having had cancer. So my concern was, if I only got one breast removed and it came back in another breast later in life, I wouldn’t be able to have the transplant and I’d have to be on dialysis for years until I was past that period of time,” she explains.

Judi had the double mastectomy in September 2013 and decided not to have a reconstruction after much deliberation.

For a year I had no breasts, because I wanted to see if I could cope living with no boobs, and I didn’t like it. I swim a lot and I’m also pretty relaxed in my dress style. You feel very self conscious,” she says.

But as they say, there is always a silver lining, and Judi’s was stumbling upon what is now her kaftan business Ruby and Raven.

“Three months after that my partner at the time and I went to India. I’d been a couple times before. It’s a place that whenever you need to put things into perspective, go to India,” she says.

So I went there, no boobs, very self conscious. We were in this shop and I bought this beautiful kaftan and felt so much better because it was all loose and flowy. Everywhere I went women were coming up to me asking me where I got it and telling me I look amazing.”

At the time, Judi was looking for a career change, as she suspected that the years of stress in hospitality was one of the causes of the cancer. Another moment of kismet followed and everything fell into place.

“I’d met this guy, Niyas, while we were there, we just got into his cab one day and he and I just seemed to hit it off.”

She came back to Australia and had the strongest sense that she wanted to do something for Niyas’ family who was struggling to put food on the table and keep their house from literally falling down. Judi employed Niyas to help her with Ruby and Raven and he began finding her fabrics, tailors and suppliers. 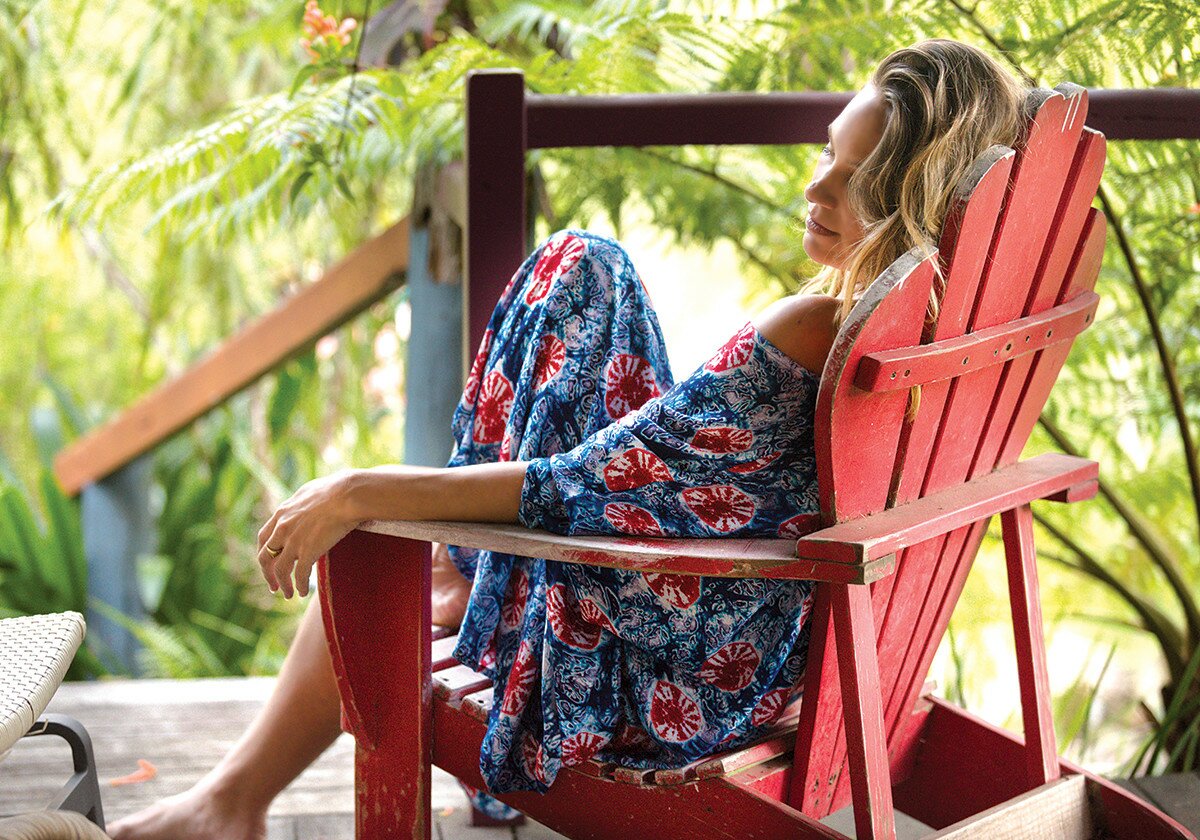 “He co-ordinates everything there. I entrusted him with all this money, he could have ripped it off and to date he’s been spot on. And now he’s rebuilt his house,” she says.

In the meantime, Judi decided to get the breast reconstruction, which brought back her confidence. It was 2015 and Judi was starting life afresh with a newfound zest for life.

“I moved up to Sunrise Beach. Got back into it, pumped. Life moves on. Single. New boobs. Let’s do it!” she says excitedly.

But then Judi’s kidney function started crashing and by September that year it had fallen below 20 per cent.

“I had a complete meltdown because I’d just been through all that, and financially I was really starting to get in a pickle,” she says.

Little did Judi know, she had a saviour by her side since she was 13 years old. Her best friend, Kerryn, had always said that she would give her a kidney when the time came. After months of testing, they found she was a match.

I don’t think there would be a truer test of friendship or a more generous thing you could do. A complete legend. She has been part of my family for years but now she’s the other sister,” says Judi.

Kerryn was able to go home the day after surgery, but Judi had a long road to recovery, including numerous medications (and their side effects), a stint of neutropenia, a virus called CMV, and mental health issues. Thankfully in the last two months Judi is back on her feet again with a brand new perspective.

“I’ve given up smoking and drinking, and I’m vegan. I’m doing lots of swimming, walking and eating raw foods. I’m just going for it,” she says.

“I want to enjoy life, slow it down, keep it simple. My tribe of people; that’s what has gotten me through and that’s what makes you strong. The support I have around me is just amazing. You don’t go through all that without changing and without wanting a different life.”