We view our business as a living entity, not as a machine. “We’d caught the Union secretary ripping funds off where I was working at the time so all the staff walked out and I came up here for a holiday,” she says. “I had bought a townhouse in Peregian Beach and decided to stay. I tried to find work but I couldn’t find anything comparable to what I was earning in Sydney.  I was getting really desperate, so I applied for a receptionist job in a real estate office in Hastings Street and the woman said to me, ‘With your qualifications you’d want to go higher and the only job after this is mine and you’re not having it. “So I put an ad in the paper, I always joke I put ‘5ft 7 green-eyed-blonde looking for bloke,’ but I didn’t, I put an ad looking for work and Bob was the only one who answered my ad.” Chris was straight to work, setting up a computerised accounting system on a desktop computer, which had a 20MB hard drive capacity. “Bob used to have these little invoice books with scribble in it and I took them and set up his computerised accounting system,” she says. “We met in that backyard shed, Bob had a bikie and a 26-stone bloke from across the paddock working for him mixing the products in there and then I rolled up. He used to test and make products in an old lean-to shed, that was our laboratory.” Outside the shed, Chris painted on a beam – Rockcote Research and Development Wing, which they have since salvaged and hung on the lunchroom building on a purpose-built site at Yandina, beside the garden bursting with snow peas, lettuce and choko plants. They also have a few chooks roaming around. But as much as they’re both stuck in their ‘hippy’ ways, Bob and Chris are savvy entrepreneurs, having built a multi-award-winning business here on the Coast. “We were just doing what we loved, we didn’t know you couldn’t build a big business doing that,” says Bob of their success. “A management consultant came to us in the late 1990s and asked what sort of growth we had experienced, and in the early days we doubled our turnover every year.” In the first three years of Bob and Chris being together, Rockcote grew by 280 per cent.

Bob once gave away our last thousand dollars to someone who needed it more than us and I had holes in the soles of my shoes, but we knew we’d make it again. 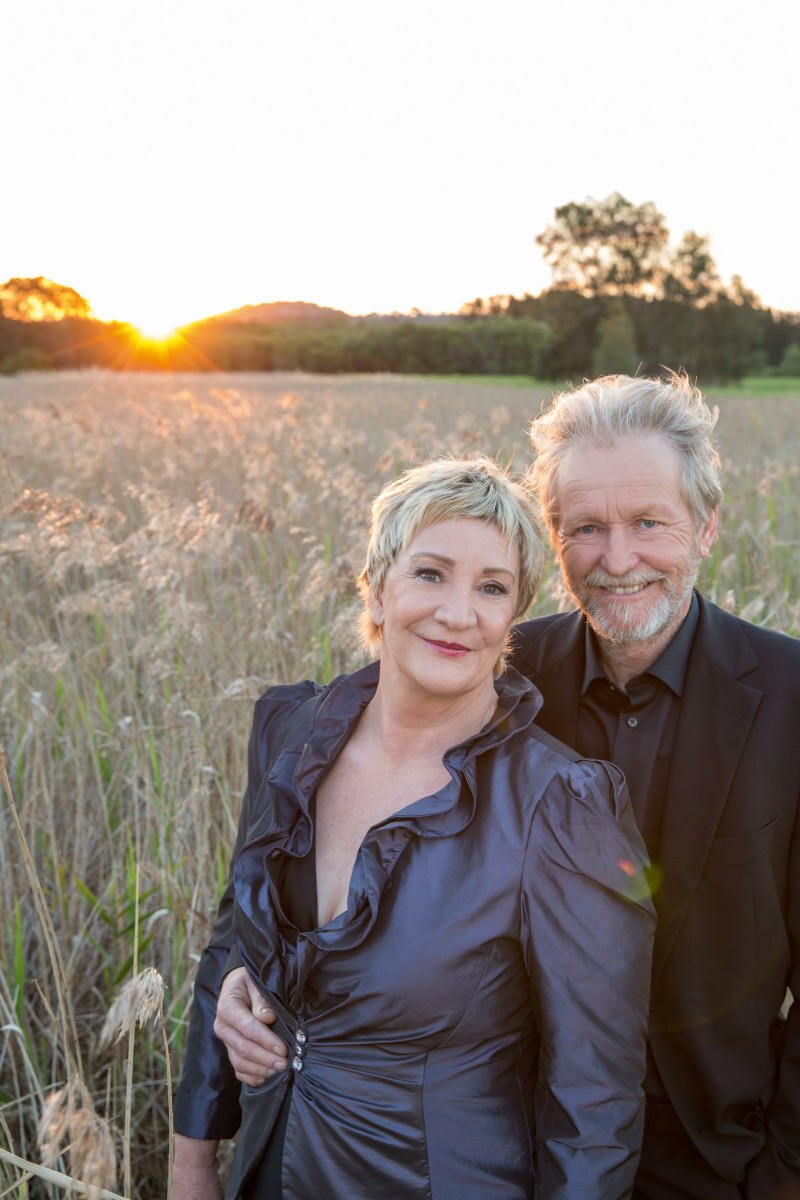 “We didn’t know you couldn’t do that, we were just doing what needed to be done, although there was a lot of luck and being in the right place at the right time as well,” says Bob. “We consistently grew 40 per cent a year and this fella said, ‘Doesn’t that put severe pressure on your cash flow?’ We started with no money, just hand to mouth, and I thought about it and said, ‘We’ve pretty well had a cash flow crisis for the last 15 years’, but that’s what we lived in, we didn’t know any different.” But despite their lack of disposable income they remained as generous as they did humble. “Bob once gave away our last thousand dollars to someone who needed it more than us and I had holes in the soles of my shoes, but we knew we’d make it again,” says Chris. And that’s exactly what they did. By the year 2000, Rockcote’s cash flow had gone from a trickle to a cascade and the business was flourishing more than ever. “We started thinking about the future and whether we should open new businesses and grow in that way, but we weren’t excited about that prospect,” says Bob. “That’s when we started thinking, what does the world need? And we started working on the business to make it more people-friendly and in turn better for the planet. “We got really excited about that and researched it and the rest is history.” The new millennium was a catalyst for Rockcote, by that stage Bob had started “messing around” with clay products and they were in the planning stages of their Design Centre, which would become Australia’s first fully sustainable commercial development. They intended to build it on the land neighbouring their manufacturing plant in Yandina, but after two years of fighting with Maroochy Shire Council, uprooted and built it at Nerang on the Gold Coast. The building was completed in 2004. “In those days we were seen as absolute lunatics,” says Chris. “At the time, we had an internal accountant who said we were irresponsible to be taking this environmental and more holistic view, and shouldn’t be allowed to be Company Directors, it’s amazing that it was said from within the company,” Bob adds. In 2012, Bob and Chris, who are also original members of the Sunshine Coast Cleantech Industries group, were inducted into the Living Smart Awards Hall of Fame for being leaders of sustainable production and business management – their products are made in a state-of-the-art facility that requires up to 90 per cent less energy than the industry standard, on a site that is water positive. They have also won a multitude of awards including a United Nations Szencorp Award for Excellence in Green building, in 2002 the State Government recognised Bob for his work in the environmental arena, they both have honorary degrees from the University of the Sunshine Coast, Chris has been named in the Top 100 Women of Influence in Australia, and in 2003 she was named Telstra Queensland and National Businesswoman of the Year. “That was life changing for me because I didn’t think I knew much about business. We just stumbled along, it just seemed to happen,” says Chris. “I went from not believing in myself and that award made me believe I really did know what I was doing.” While the recognition has made Chris sit up and take note of her achievements, it’s quite the opposite for Bob, who now feels he needs to work even harder to live up to the expectation. “It gives you extra responsibility, we have a saying here at Rockcote, the honour isn’t in winning awards, it’s in deserving them,” he says. “We’re more interested in deserving the awards we’ve got than worrying about getting others.” So does he feel deserving? “We feel we’re doing our best to live up to it.”

We’ve found in the last 150 years we’ve forgotten how to build our buildings without the requirement for lots of poisons and fossil fuels just to make them liveable.

Rockcote’s EcoStyle range of paints are very similar to standard acrylic paints, except they have omitted the poisons and contain no VOCs (volatile organic compounds) or harmful chemicals. Their latest range of Natural Materials are made from fully organic and biodegradable building products, which Bob explains are biophilic, aptly meaning life loving – they actually clean the air and help maintain the humidity at the ideal range to support human health and discourage the growth of harmful bacteria and fungi. “Everything that’s healthy and alive, they promote that, so there’s no toxic mould, no growth, they clean some of the toxins out of the air and keep the humidity in the ideal range for human health,” says Bob. “Another thing is with our products, we’ve slowly removed the poisons and now our latest range, our Natural Materials, they’re based on things from nature that have been around for thousands of years – the birds and ants use the clay, they do it better than we do, so we’ve still got a lot to learn.” They are also wanting to encourage the greater use of building products that are safer, made from either recycled materials, things that grow, waste streams, biomass like straw and hemp or common materials like clayor stone. “We’ve found in the last 150 years we’ve forgotten how to build our buildings without the requirement for lots of poisons and fossil fuels just to make them liveable,” he says. “Then there’s agriculture, we don’t know how to do that anymore, unless you go and get our chokos, lettuce and snow peas that have been grown with no fossil fuels, no chemical fertilisers, no pesticides, and grown with an understanding of the soil biology. “Then there’s our health care, you shouldn’t need drugs, you should be able to keep healthy with your food, environment and lifestyle. They’re things we’ve forgotten, our communities, our families, they’re very nurturing things we’re losing touch with and we want to help rediscover these things.” Bob and Chris have been applying the principles of natural living systems to how they structure their business and are now on the cusp of ridding their business of all levels of management, to allow their staff to make decisions at the coalface. “The big one for us is we want to grow our company into a corporation, without having the normal problems of creating a bureaucracy, we want to keep that same drive and enthusiasm and something that’s alive,” says Bob. “We view our business as a living entity, not as a machine. I don’t like the old idea of the command and control of management, a leash is just a piece of rope with a noose at both ends that enslaves both. To set yourself free, you’ve got to have trust. It’s difficult though, we’ve got a long way to go.” Chris says they’ve always considered themselves to be ‘the elders’ at Rockcote, and as they near 60-years-of age, are stepping away, one bare foot at a time. Bob’s going fishing, Chris wants to learn a language fluently, either Italian or Spanish, and is spreading goodwill by sitting on a few charitable boards. Next year Bob is heading to New Zealand to address the straw bale building conference. “We don’t have to plan our retirement, we live it,” says Chris. “One advantage of having your own business is you can take time out. When our daughter Jess was little, Bob was the only father sitting on the little kindy chair watching the performance at school or he’d be making scones for the tuckshop.” “We were famous for our pancake stand!” Bob adds. But they’ve become even more popular for their environmentally-friendly artisan homes, hotel rooms and commercial finishings. One of their favourite projects is Bob’s mum’s house, boasting an incredible eight-star energy rating, which they fondly call the “little pig’s house” because it’s made of sticks, clay and straw. “It’s so beautiful to live in,” he says. “We were involved in the National Sustainable House Day program and an architect came along with her daughter. We turned around and found this gorgeous 12-year-old girl hugging the walls, which are made from our Earthen render finished with a polished clay plaster and protected by a natural wax finish.” Bob and Chris’s sanctuary in Eumundi is also a pretty special place. “We live on 14 acres and from once being void of any trees, we have reafforested the property, planting nuts, fruit and foliage and established a koala corridor,” he says. Up where Bob and Chris Cameron live, they breathe a cleaner air and serve a higher purpose and that’s pretty powerful. (Bob wears black Calvin Klein shirtRRP $89.95, available from Myer Sunshine Plaza, suit and shoes are his own. Chris wears Leona by Leona Edmiston dress RRP $129, available from Myer Sunshine Plaza.)  ]]>
123host October 1, 2015
previous article

Sky is the Limit