Hope for the helpless

Lyme disease and whether it exists in our country is one of the most hotly contested topics among the Australian medical community, but for hundreds of people around the nation, the excruciating and debilitating Lyme-like symptoms they suffer are very real. Trudi Bareham shares how she has overcome the worst of her diagnosis, offering hope for those who had lost it.

“I want to raise awareness for the Lyme community; it’s already very difficult for them as it is,” says Trudi Bareham, nursing a cup of tea in her hands as she prepares to share her story with me. “I just want to offer people suffering like I was, hope.”

As a holistic therapist, Trudi was the picture of health. So when the English expat was diagnosed with rheumatoid arthritis in 2009 after she started to get swelling in her finger joints and experience fatigue, it came as a surprise.

I was actually embarrassed to be diagnosed with a serious condition, when I’m supposed to be helping other people, so I didn’t really talk about it that much to start with,” she says.

“At first they thought it might be lupus. With rheumatoid arthritis, there’s a list of things that you have to meet criteria-wise and it still can be a bit of a clinical diagnosis, so based on the blood tests I had and the presenting symptoms, I was diagnosed with rheumatoid.”

Having been told it was an aggressive form, Trudi was urged to start medication as soon as possible. But while she took prednisone on and off for the first two-and-a-half years to deal with the swelling and joint pain, she was concerned about the side effects of the medication and sought a more natural way to manage the symptoms.

In 2012 she started a support group for people with rheumatoid who, like her, were seeking more natural solutions. There she noticed that while she was experiencing terrible pain and her hands were swollen, she showed no signs of the joint damage or degeneration most people with an aggressive form of rheumatoid would have. Trudi continued to try new options and stunned even her doctors when in 2013, after doing the blood group diet, she was deemed to be in clinical remission.

Continuing her mainly raw diet with a little protein, Trudi was back to normal for three months, before a decision to incorporate the superfood sauerkraut into her diet threw her gut bacteria out of balance, everything Trudi had achieved came undone and her symptoms returned, worse than before.

“I became completely paranoid about food. I’d made the connection that the things I was eating could make things better or make it worse. My family must have been driven insane because I’d constantly talk about food. I really was crazy,” she laughs.

Her pain and suffering continued until 2014, when she started taking methotrexate and plaquenil – the first course of medication for rheumatoid, which her doctors still believed was the cause. 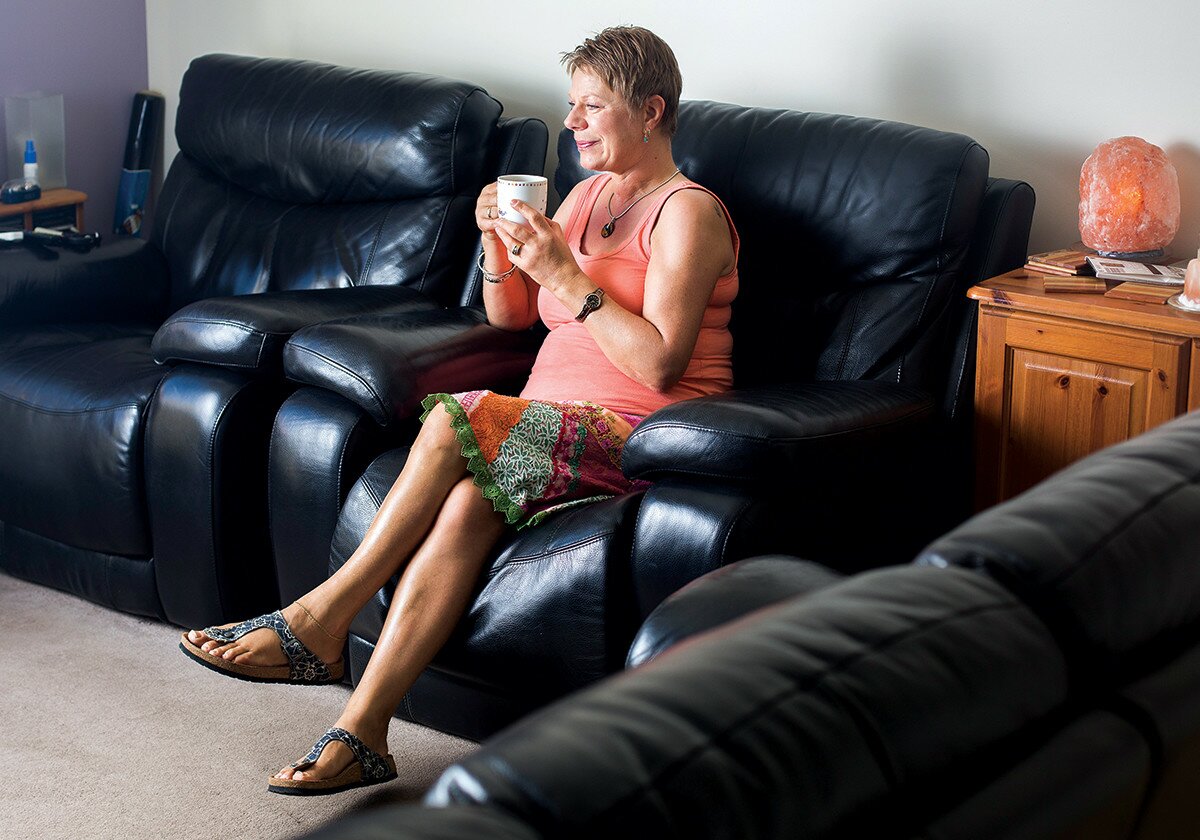 “I was in so much pain. I didn’t know what else to do. There was a slight improvement for about six months, but I still felt awful, and I eventually started to get more and more sick,” says Trudi.

For the whole of 2014, Trudi says she felt toxic; she was exhausted from chronic fatigue, suffered intense joint pain, felt constantly chilled to the bone and her muscles were wasting.

With the feeling something else was going on, Trudi constantly sought help from her GP and rheumatologist, who didn’t have any answers. Then when the naturopath she was seeing told her it was all emotional, she felt lost.

“I was talking to a friend in my support group one day and I said, ‘I just feel like I’ve got things biting in my muscles and crawling under my skin,’ and she said, ‘Oh my God, so-and-so had Lyme, I think you need to get tested’.”

Though she had been bitten by mosquitos and sandflies a month before her rheumatoid symptoms started, she didn’t recall having encountered a tick before. But desperate for answers, in March 2015, Trudi met with another doctor and naturopath, who believed she had a biofilm disorder.

“The doctor was amazing – it was the first time anyone listened to me, wanted to know a full health history, and basically validated what I was saying.”

Over the course of six weeks, Trudi’s blood was tested, her mercury-based tooth fillings removed, and a sleep study was conducted. Then the results arrived back with the startling diagnosis – her blood contained borrelia, the bacteria behind Lyme disease.

To back up the results, her doctor advised her to go to another pathology lab to get an eight-week culture, which also returned positive.

“I was happy to get it (the diagnosis) because I was like ‘Great, now I can start getting better’,” she says.

But in May 2015, Trudi started on a small dose of antibiotics and by the time she was on a full dose, she had never felt so ill. Her body felt like it was burning and the pain was so excruciating she could barely move. Her whole body was inflamed and her joints swollen. The pain would flare up around her body, and she suffered from was costochondritis, which caused every breath to feel as if it was crushing her.

“For a normal person, you would think you were having a heart attack, and there were times where I should have gone to the hospital but didn’t because I know what Lyme patients are faced with when they go to the hospital and say ‘I have Lyme disease’ – the ridicule many are put under, the total denial that Lyme is here. And I just wasn’t prepared to do that,” Trudi explains.

I was just in such an awful emotional headspace because of the hopelessness of the never ending pain, and I couldn’t deal with medical professionals who would not acknowledge that I had Lyme disease. It was like a living death and every day was groundhog day and it was about surviving that day.”

It turned out that due to a genetic mutation that prevented her body from detoxing itself, the die-off of bacteria and the subsequent waste produced weren’t leaving her system. It took nine months after stopping the antibiotics for Trudi to return to the baseline awful state she’d been in prior to taking them.

Though she continued following the instruction of the clinic’s naturopath, in September 2015 her doctor told her she was beyond his capabilities and that her best chance for recovery was to undertake hyperthermia treatment in Germany. An extreme and intensive procedure where the body is heated to 41.6˚C to kill off the bacteria, the procedure would cost $40,000 and there was a chance it may not even work – in fact, given that she couldn’t detox, it had the potential to make matters worse.

“It is wrong that people can’t get help in the country they live in,” she says.

Trudi invested in a far infra-red sauna in October 2015. And by combining daily sauna sessions with her naturopath’s anti-microbial herbs and supplements, as well as a healthy diet, regular cleansing and detoxing, and weekly biofilm-busting days, Trudi says that while she has not fully recovered, she has discovered an effective treatment that has turned her life around.

“But I’m really grateful now to be able to do normal, everyday things again, and that’s what the treatment has done for me; it’s given me my life back.”

Now nearly two years on the road to recovery, Trudi is sharing her story with the desire to let others know not to give up, and continues to run a support group for those experiencing a similar journey.

“Never give up hope, there is always a way,” she says.