Into The Wide Yondo

After their launch at the end of 2015 saw the brand take off on a global scale, Sunshine Coast based tech start-up Yondo has partnered with website creative outfit Weebly for a business match made in technology heaven.

In the eyes of many, the internet is a domain of younger generations – the youth whom have grown up using the technology and understand it as if it’s an extension of their very being. But in the case of tech start-up Yondo, it was actually an elderly woman who inspired the business’s creation.

Speaking with me from his Maroochydore office, Yondo’s chief executive officer Tony Jarboe explains how his lightbulb moment came from reading an article in the New York Times about a woman in her 80s who had started teaching piano lessons over Skype after she’d had a lull in business due to a lack of youth in her town. Within the article, he recalls the women stating that the most difficult aspect of her business was organising times for online lessons with her students and arranging payment.

“That’s when I realised, there’s a market I can address,” says Tony in his heavy American accent.

In 2011, Tony and his wife founded Expertory – the world’s largest online expert marketplace sharing live classes and video call consultations. The following year the business’s co-founders came on board, and in 2013, Expertory officially launched with resounding success. However, one recurring piece of feedback Tony says they kept receiving was from businesses which wanted to drive people to their own websites rather than share the limelight in a competitive marketplace.

Yondo launched in late 2015 as the next generation of Expertory, enabling individuals, not-for-profit organisations and businesses to schedule one-to-one video and phone meetings, sell their own videos and webinars or hold live group classes for up to 1000 people from the Yondo website.

“We knew we had something,” says Tony. “We were able to feel our way through a bit with Expertory, and with our pivot in direction, we listened to our customers and what people wanted.

“If it’s a service that’s not tangible goods, we’re your go-to.” 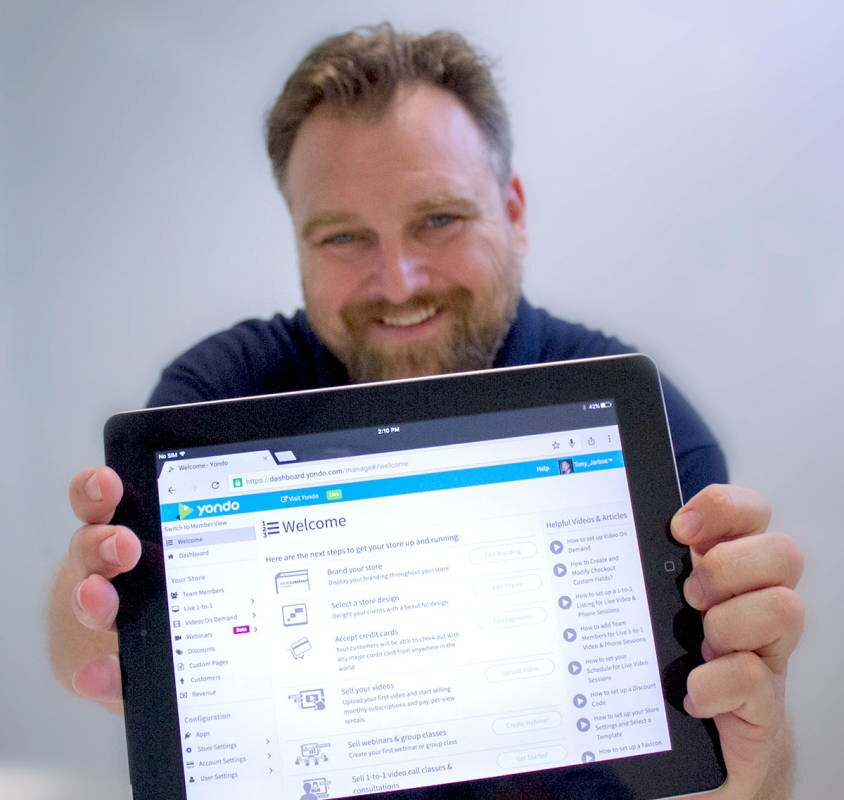 The idea has already seen Yondo ranked second by Forbes as one of the top nine “tools you need when launching a consulting firm”, earlier this year, but it is their recent partnership with website builder Weebly that is expected to really propel them into ‘game changer’ status.

“We started talks with Weebly five months ago and everything from the beginning fitted perfectly with them,” explains Tony. “Our webinar app on their system gives a piece of what users can do on our complete system, but on our system they can record their webinars and charge for it. Customers can still use our full system and use the app too.”

Weebly is a service that enables its users to easily create unique websites, blogs and online stores, and with more than 30 million users worldwide, it’s an incredibly valuable ally for Yondo to have.

“For us to be the only webinar solution on their system says a lot for what we’re doing,” says Tony.

“Everyone we get Yondo in front of loves our product and we hear, almost on a daily basis, ‘I’ve been looking for something like this! This is exactly what I wanted!’ – they just didn’t know we existed. There’s so much out there right now, but there’s nothing else like our product, and while that’s a good thing, it’s difficult because we’re having to explain to potential customers what we do and how we can help them.

“This partnership allows us to get in front of people. But it’s also a true partnership, working side-by-side.”

The team effort is clearly working too, with Tony telling me that since releasing their webinar system on Weebly at the start of July, 26 per cent of those using the Yondo app on Weebly are signing up to Yondo’s complete system. Not surprising considering Yondo is the first webinar application to ever fully integrate into a major website building service.

“We have the most broad set of users you could possibly imagine – we even have a lady teaching horsemanship classes on there, and I tell people, if you can teach people to train horses through our system, you can teach them anything,” laughs Tony.

With customers now able to customise their own websites through Weebly while using the integrated services of Yondo’s online videos and webinars, they’ve certainly listened to the public’s demand – and it’s paying off.

“This has been a long road. It’s been a lot of hours but it all pays off when you have a customer tell you it’s the best product they’ve seen. It just makes you feel good and lets you know what we’re doing is working,” says Tony.

So with such a great success, what’s the next big thing for Yondo?

“We’ve put together a seven-week webinar series teaching people how to grow their business through webinars. It’s an on-demand video series we’ve teamed up with Weebly to promote, so once we start that we’re expecting an even bigger drive towards people signing up,” says Tony.

“We’ve also made a deal where the largest doctor marketplace in Italy is going to use our system, building our functionality into their website, which means almost 4000 doctors will be using our system.”

Sounds like we can expect plenty more great things from this innovative outlet’s future.