From challenging on air discussions with local residents, to celebrity meet and greets, and charitable stunts to raise money for deserving community causes; Mark Darin declares he loves his job … well almost.

“If the whole of the Sunshine Coast could change their day to get up at 10am, then I could get to work around 8.30am and I would have the best job in the world,” he says in jest to his early morning wake-up call.

It can be tough doing mornings and my family cops the most of it, I get home midday/1pm and have this overwhelming urge to fall asleep and you lose half your life. The Sunshine Coast gets me bright, energetic and fun for the four hours of the show, but my family cop me grumpy and tired.

“I joke and call it the breakfast anvil, there’s one of those implanted right here on me (back of neck) and that weighs me down. It’s a terrible whinge to have, because it really is the hardest thing about my job, and it doesn’t seem to affect Caroline which drives me nuts.”

Mark is one half of 92.7 Mix FM’s breakfast show, the number one radio show on the Sunshine Coast, and a title he and Caroline Hutchinson have held for over a decade.

“I was lucky, I just clicked with Caroline straight away, she was already here and had a huge following and we just clicked, it was really weird,” he says.

“Everyone says we get on like an old married couple, but for me she’s more of an older sister, and that’s where the niggling and stupid fights come from, which people seem to enjoy. We were really lucky, people took to it and they took to me.” 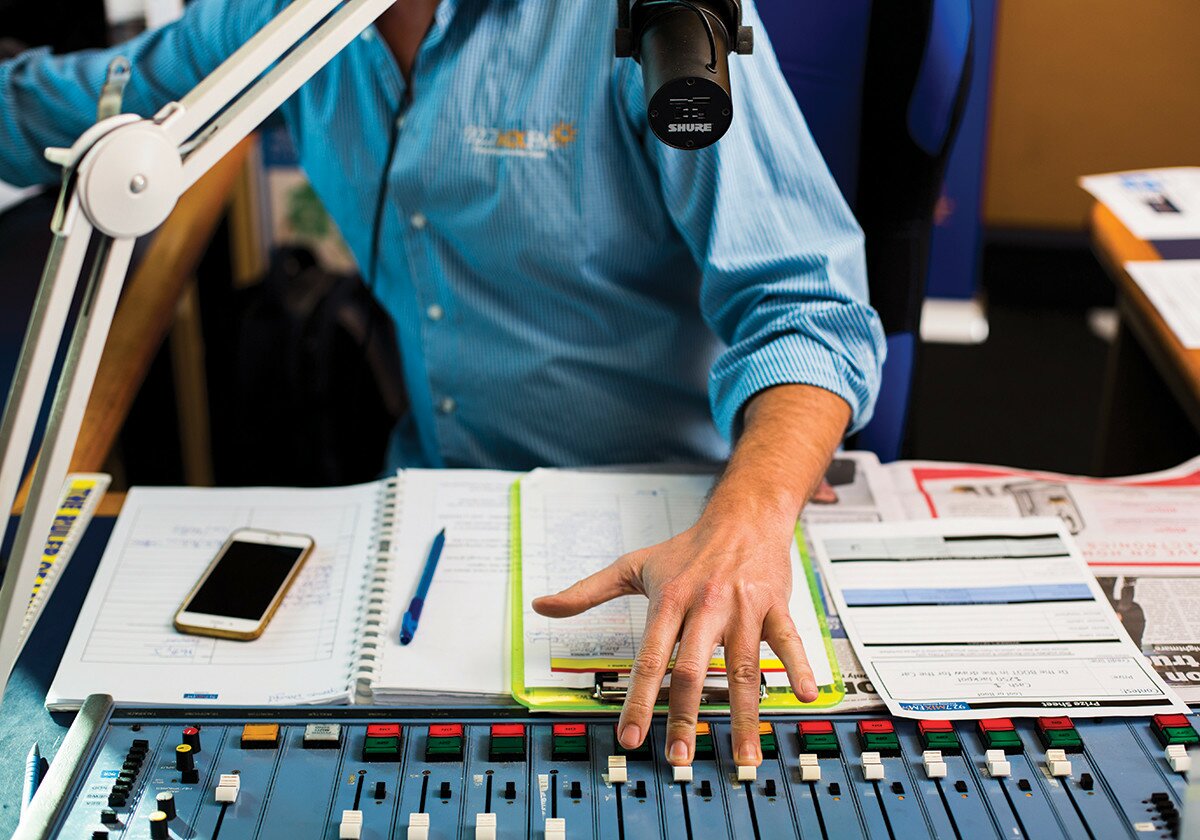 Before Mark made a name for himself on the Sunny Coast 14 years ago, he dragged around Australia, working in radio in Townsville, Sydney and Brisbane – a far cry from the civil engineering career he almost carved out for himself.

“I always had a thing for radio, I was always obsessed with it, but just didn't have the courage to take a dive into putting myself out there. I was living in Gosford and commuting to Newcastle (to study civil engineering), so I was listening to a lot of radio,” he says.

“I was listening to Helen and Mikey and found I was responding to them just as fast and in my opinion just as funny, and I thought, ‘I can do this’.”

Mark worked at the Newcastle University radio station, as well as the community radio station on the Central Coast and he got his big break in 1996, when he bumped into an old school friend, who had already done the country circuit and was hosting a night show in Gosford.

I said, ‘I’m really keen to get into radio,’ and now that I’m a radio announcer, I realise every second person comes up to you and says that,” he says with a laugh.

“But he knew I was a bit of a joker from school, he was the school captain and I was always doing voices and impersonations.”

Mark worked on the show for free for six months, then left uni and gave himself a year to find a job.

“I got my first real full time job as an announcer on air all by myself in 1997 in a little town called Mudgee in New South Wales, that was the start of it,” he says.

As Mark says, he and Caroline have clicked from their introduction and it’s this relatability and genuine approach which has become their winning formula. 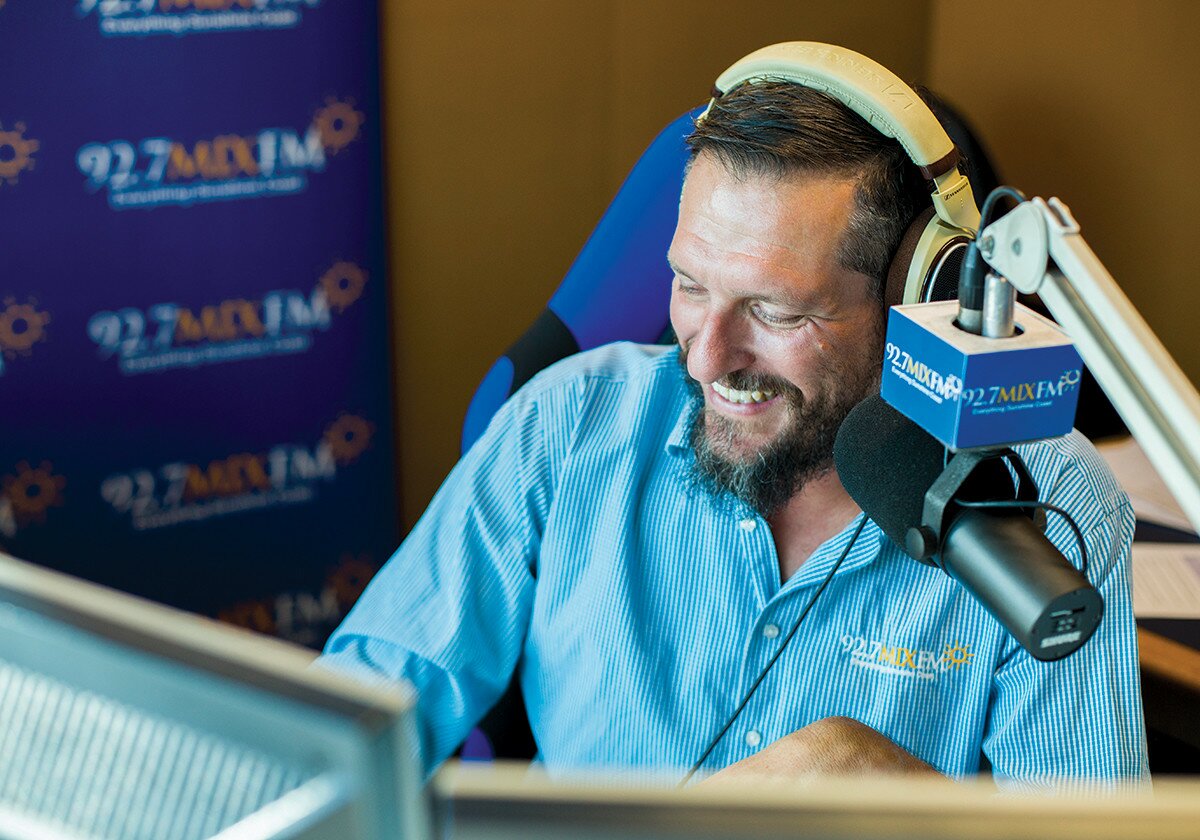 “Caroline had laid this foundation of trust and people really believe in her, I’m lucky enough that I’ve literally ridden her coat-tails and added to what she does and annoyed the hell out of her in the process,” he says.

“I gave up trying to be something else on air, you start early and think I’ve got to be funny, so everything that comes out of my mouth has some half-arsed gag to it, which is fine and a lot of fun, but I find that a little bit exhausting and I think the audience can as well. There is a lot of serious stuff out there that you can’t just spin off into a gag, or completely avoid that topic because you can’t be funny about it.”

Mark drives the show, operating the panel, computers, recordings, playbacks, sound grabs, as well as the banter and conversation.

We very much follow the news, local news is always first but sometimes it doesn’t capture everyone’s attention, so you move onto something else that might be national or international. There are always half a dozen stories each day which seem to capture most people’s attention and we need to be part of that conversation,” he says.

“Each time we come up to talk topics, Caroline and I will bounce a few ideas off before everything goes to air, we have a final 20 second chat, ‘Is this the best we can do?’ We’re ready to can it literally as the mic goes on and move onto something else if it doesn’t feel right.”

As the clock turns 9am, the day’s not over for the duo, they have a phone interview scheduled with Scotty Cam from The Block, which will air the next morning.

“You can't get people when you want them all the time, if I had it my way, every single person we interview would be right there in front of me in the studio and that’s just not possible, so I’ve had to let go of that,” Mark says.

“I tend to record about half of the interviews we do after 9am and play them the next day. I don’t like not being live, but it’s necessary because people can call anytime with a lost dog and you’re in the middle of an interview or talk topic, so you do have to have that little bit of organisation and flow, so everyone gets a piece of the pie.”

Within seconds of wrapping the interview with Scotty, Mark is already trimming the six-minute chat into a more palatable bite ready for the airwaves bright and early tomorrow.

Most memorable day on air?
“I’ve done a few kooky things on air, I’ve jumped out of a plane, I’ve stripped down to a man-kini in front of Lisa Curry, I’ve had a prostate exam live on air; but I’ve got to say, cracking $400,000 for Give Me 5 For Kids was pretty remarkable.”