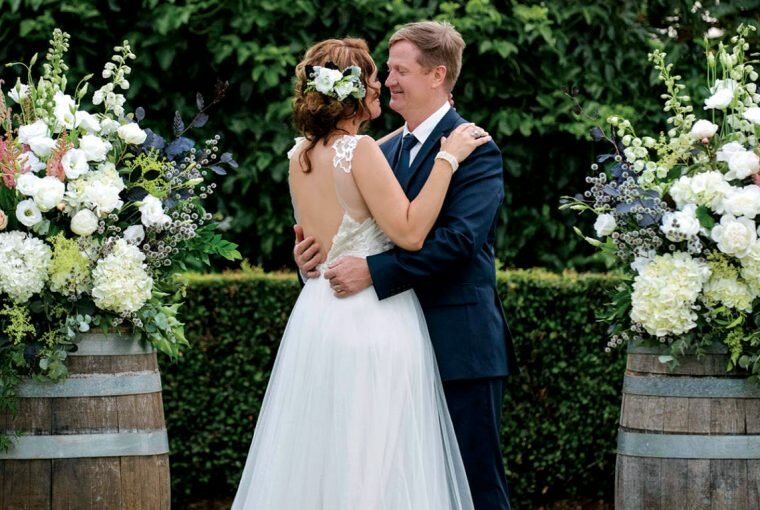 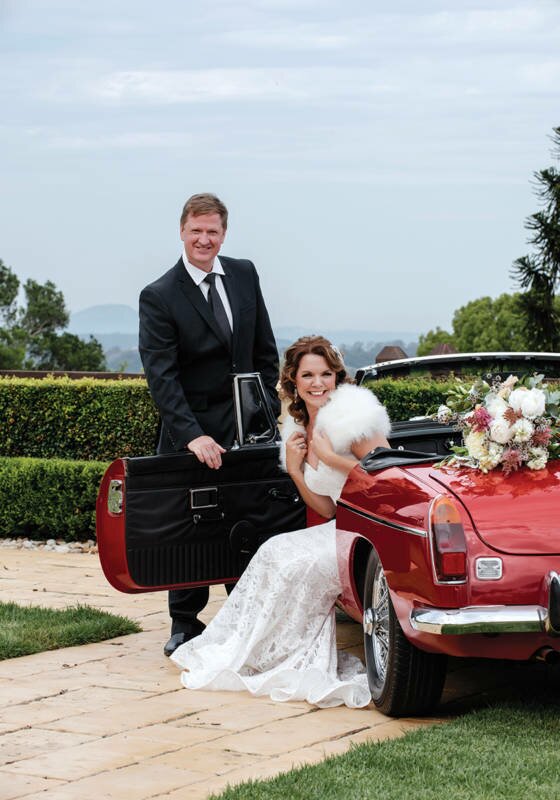 “A few weeks later we met up, and just sitting down for coffee and having him interested in what I do, I felt like he was treating me like a princess,” Mariana shares. “The second time we went for coffee I was late and the coffee was already ordered exactly how I like it and I thought, ‘Wow he really cares and he notices what I like’, and that really caught me. He wants to satisfy someone else’s needs first and make them feel valuable, I saw that in his heart, and for me that’s most important.” South African-born Mariana moved to Australia 10 years ago, and has introduced Alan to her culture – which he proudly reveals has lead to him now making his own biltong (a form of dried, cured meat that originated in South Africa) and by all accounts is pretty good! “I feel very strongly about the South African culture and Alan is slowly starting to learn some of the language and we do a lot of networking in the community, where Alan has found his place and embraced the culture. “When I get very comfortable and sometimes when I’m very tired, my brain switches to my mother tongue and I’ll be sitting with Alan and start talking in Afrikaans!” So it was fitting that on a trip to Africa for Mariana’s birthday last year, they solidified their commitment to one another.

A few weeks later we met up, and just sitting down for coffee and having him interested in what I do, I felt like he was treating me like a princess.”

“There was a time on the farm where my parents lived, at a remote waterfall, where I thought, ‘This would be perfect if he proposed here’, and he felt the same and asked God if this was the right moment. Then he looked down and found an old African tribal bracelet stuck in between the rocks, covered in moss. “He cleaned it and gave it to me – but that was not the proposal because we said we weren’t going to propose in South Africa because we had not yet discussed marriage with the children, instead he said, ‘This is a token of my devotion’. But we both knew that was the moment.” It wasn’t until they were back in Queensland and enjoying a beachside holiday, that Alan popped the question with a magnificent opal, paying homage to the Australian way of life. Each with two daughters and a son, Mariana and Alan’s family has doubled to now include six children aged from nine to 22, and a one-year-old grandson who is the apple of their eye. From the beginning of their partnership, both vowed to be honest with their children and put their needs first, which has seen the families integrate with ease. “When we got married, the kids wanted to be part of it, they wanted to be the bridal party,” Mariana says. 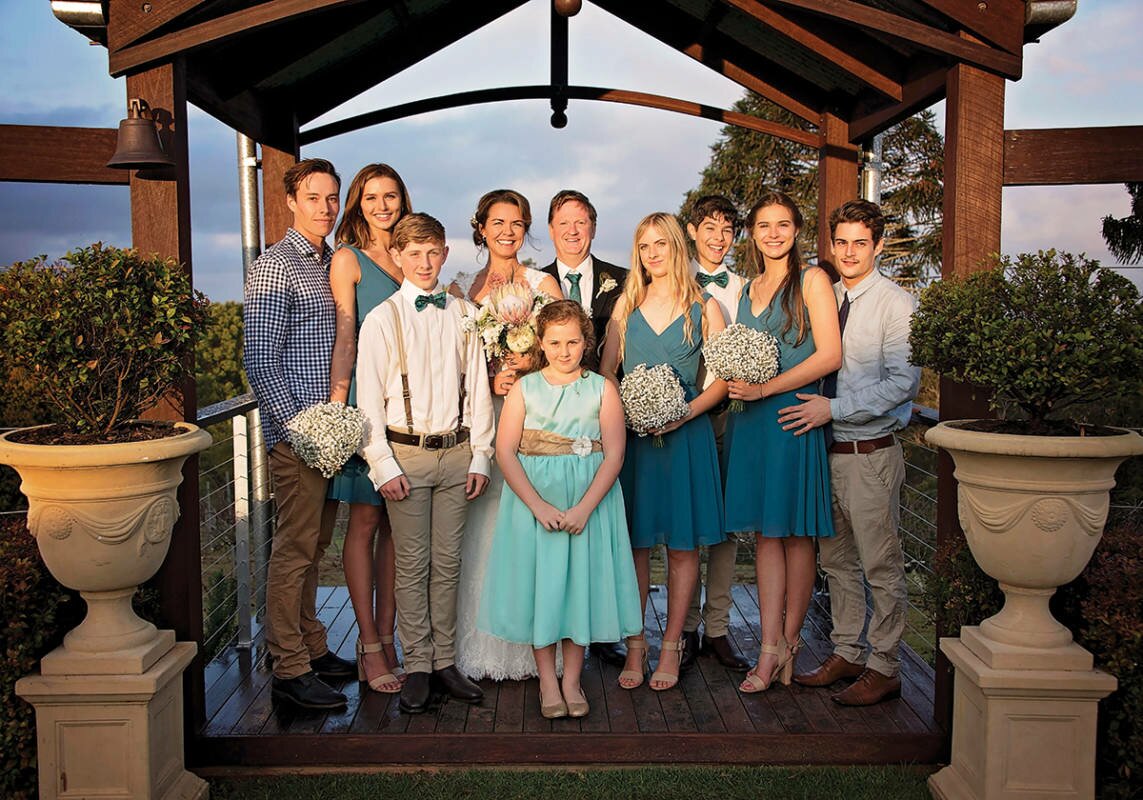 On 10 September, 2016, on an overcast and rainy day, Alan and Mariana wed in the big hall at Flaxton Gardens, surrounded and supported by 160 of their closest family and friends. “It’s a very big thing, I don’t take it very lightly, yes it was extremely quick in reality to go from almost 25 years of marriage in Mariana’s case, and I had been married for 20 years, to then be remarried 18 months later, but we’re both people who don’t do life alone very well, you need a partner, you need a companion, somebody who is your equal, who you respect and love and honour.” says Alan. “For me it’s to know there’s someone who needs me, that makes me complete, I’m a giver and I love to give and I need him, I need a solid man in my life, I need someone I can love and be allowed to love,” says Mariana. “That’s a big thing,” adds Alan, “not everyone allows themselves to be loved, I analyse life a lot these days and I’ve learnt a lot along the way. We hold a lot of weddings here at Flaxton and it’s a sad statistic that some of them won’t last. 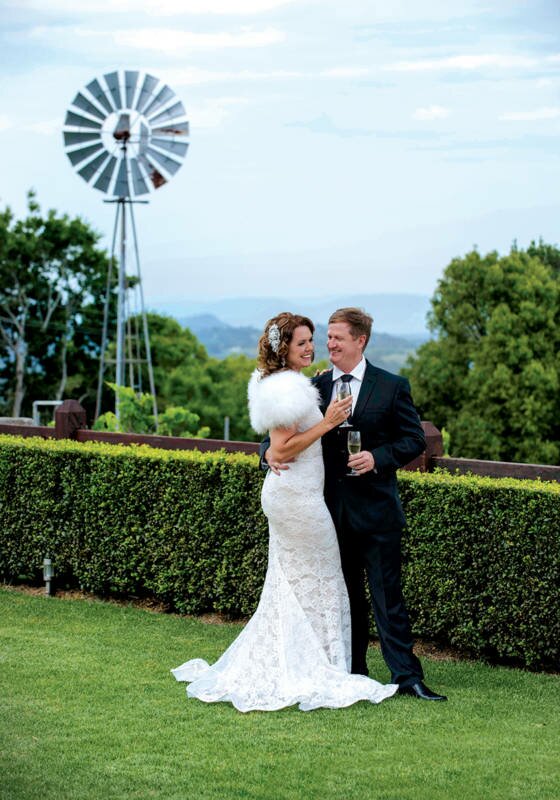 “Society today is a throwaway society, and people don’t fight for a cause, they don’t have a joint purpose, in life and in marriage it’s not all going to be roses, for me a true marriage and relationship is built through the tough times, it’s how you come out the other side that gives you strength as a couple.” With Alan and Mariana’s private lives pieced together, they are forging a new path for Flaxton Gardens. “Flaxton is an iconic Sunshine Coast property, it’s 15 acres, and it took seven years to be able to buy it. It was a dream of mine when we moved out from the UK,” Alan says. “It’s an amazing venue and I love the reaction when people walk onto the property, whether they’re coming in for morning tea, scones, or lunch in the restaurant or whether it’s the bridal party.” 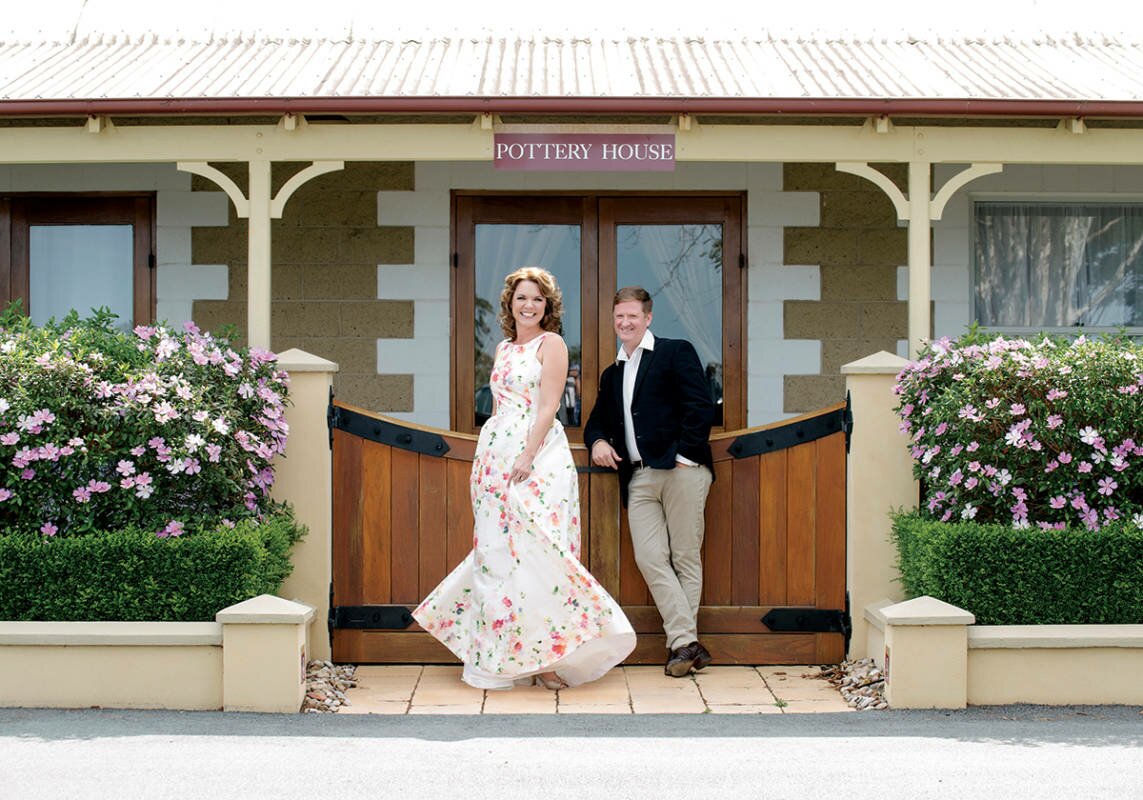 When Alan acquired the property, he says it was a shell – the main structures were there, and a tin shed had been built with the intention of operating as a winery. It is now the function hall where large-scale events and wedding receptions are held. “Part of the original buildings are approximately 100 years old, it used to be a dairy,” he says. “The previous owner, Ross Anketell and his sister Sonja, had it for about 45 years and they built it with their hands – everyone knows them. Sonja was the original potter, she did all of the potting classes in Montville and moved it onto Flaxton and people still come in, 15 years after, looking for her pottery. “I’m very passionate about leaving a legacy instead of being a trend, you need to be in fashion but you also need to be a classic and this is a classic place, it will always be here whether it’s ourselves as owners or someone else. My favourite saying for staff is, ‘Leave foundations for someone else to build upon’.” And Alan is certainly doing that, particularly in the kitchen, training and nurturing budding chefs.

It’s an amazing property and I love the reaction when people walk onto the property, whether they’re coming in for morning tea, scones, or lunch in the restaurant or whether it’s the bridal party.”

“Hospitality is at my core, but my true passion behind that is the dream or the creation of the venue, it’s the third time I’ve created a venue, the other two were in the UK. The first one was a restaurant in Fulham, in the first year it went up to a three rosette restaurant (a highly coveted accolade in the UK) and placed in the top 10 per cent in Europe,” he says. “Then I sold that and we bought a country house hotel which is in the Guinness Book of Records being England’s oldest hotel, carbon dated back to 947, so we renovated it and took that to the top 10 per cent in Europe as well.” In 2004, Alan and his growing family moved to the Sunshine Coast, an area he identified as having great potential and future growth, a sentiment he still believes in and carries over to his vision for Flaxton. Along with the ever-popular and extravagant weekend weddings, they also cater to elopements and weekday celebrations, and given the Sunshine Coast is one of the most popular wedding destinations in Australia, bookings are coming in thick and fast, “spring 2018 is filling up!” “Flaxton is here to do life with people, from baby showers, to engagements and weddings, and recently we’ve started holding celebrations of life, which is beautiful because we have an amazing property where you can say goodbye to the person you love in the best way possible,” Mariana says. 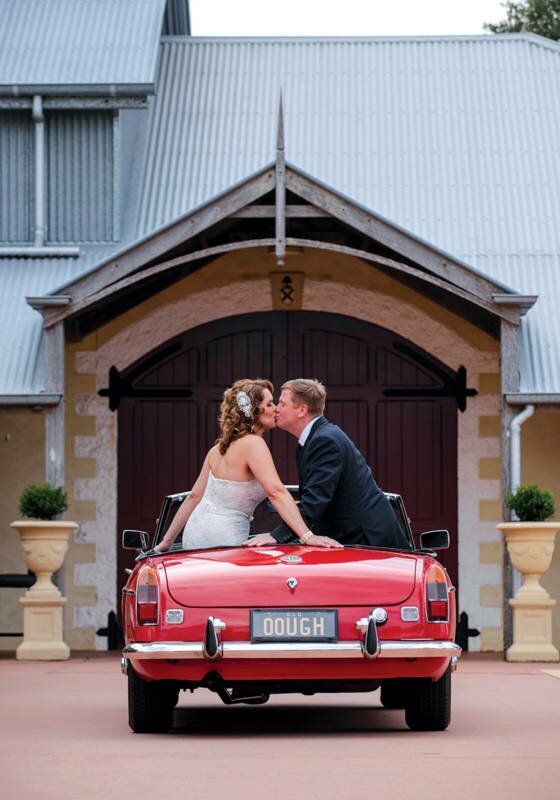 Flaxton is also renowned for their delectable high teas and devonshire teas and has now introduced daily lunch options. The new dinner menu and happy hour menu is available five nights a week. They also have accommodation options within their neighbouring stable of properties, catering from two to 40 people. “There’s nothing that gives me greater pleasure than when the venue is full and I just stand back and listen to the hum,” Alan says fondly. “A venue has a soul, it has a hum when people are there chit chatting, having a great time – that is hospitality and as an owner, it’s my job to have people walk in and say, ‘This is it’. “The previous owner’s catch phrase was ‘Tranquil elegance’ and that’s still what this place feels like, it’s relaxed quality.” Even on the Monday morning of our interview, family members are gathering and preparing for the 11am ceremony, musicians are sound-checking the procession and chefs are fiercely prepping for the reception. Even after all these years, Flaxton Gardens’ heart is still pumping, skipping a beat at the first sight of love.]]>
123host February 1, 2017
previous article