There are some homes that literally make your jaw drop, “Azure” is one of them. Inspired by the architecture and ambience of the Greek Islands, it’s not hard to see why this breathtaking home is regarded as one of the Sunshine Coast’s finest.

The first thing that strikes you about this award-winning home at beautiful Sunshine Beach is its location. With uninterrupted views to the ocean and headland as well as views down the Coast to Mount Coolum, designer Chris Clout knew he had a very special site to work with.

“I remember being at the old existing house on the site, you could see a lot of the ocean, it gave me a feeling of being back in the Greek Islands. I got a real feel for the atmosphere while I was there and I had stayed in many of the top resorts, so I tried to recreate that luxury resort style with Azure,” says Chris. 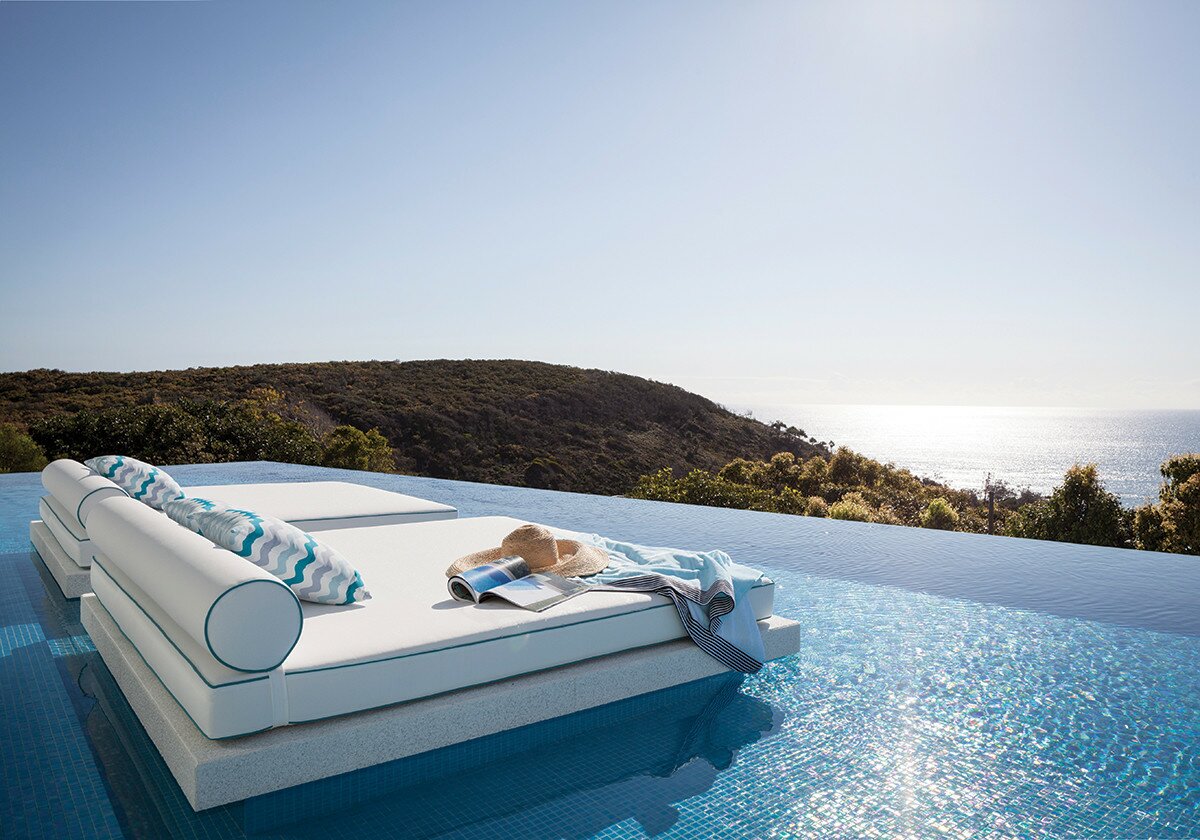 “We had done a lot of Asian-inspired homes, with lots of timber and I wanted to do something completely different, with sleek lines and crisp white styling.”

Working with his uncle, Glen Watson, Chris created the home with a focus on open plan living.

Built over three storeys, the four-bedroom house features a separate floor with three bedrooms, and the entire top floor is dedicated to the master suite.

With formed stairs that zigzag up to the suite, which is a million dollar retreat in its own right, no expense has been spared to make this a truly luxurious haven. The open plan set out includes a large walk-in robe and open ensuite with a large shower showcasing spectacular views. Marble cladding and fresh white 2-pac are used with Sisal Stone vanity to create a stunning space. The master suite also has its own private terrace with a daybed and outdoor spa. 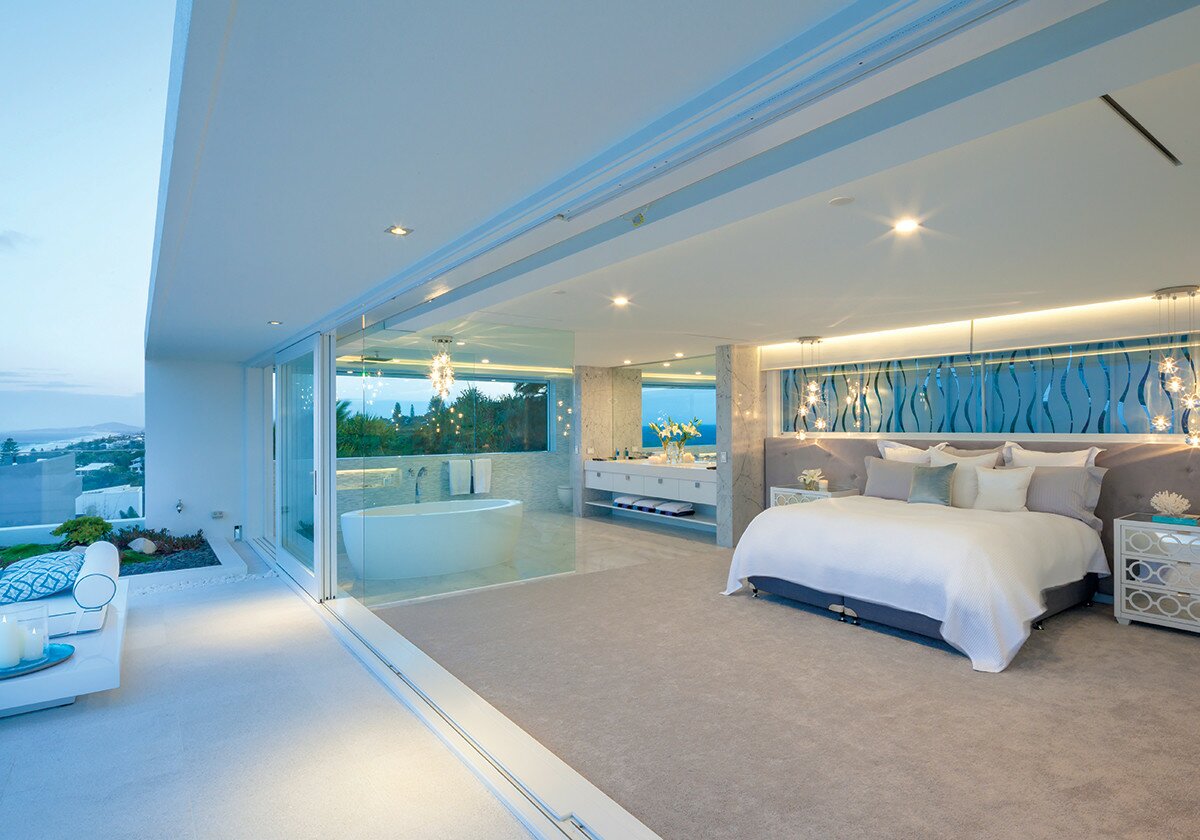 The facade of the house features laser cut screens with a pattern echoing the waves of the beach and sand below, set within solid white surrounds, a large glass panel showcases a waterfall and frames the frangipani planter behind.

The entrance of the home steps down over layered cantilevered treads and immediately the eye is drawn through frameless entry doors to the spectacular views, the infinity pool and to the deep blue of the Pacific Ocean beyond.

The engineering of this house was outstanding, allowing us to have a 14 metre uninterrupted span for the doors out to the pool terrace,” says Chris.

The infinity pool is a standout feature of the home. Its raised structure hides the houses below to give uninterrupted views from the headland all the way down to Mount Coolum.

“We knew we had to take full advantage of its great north-east-facing position,” says Chris. 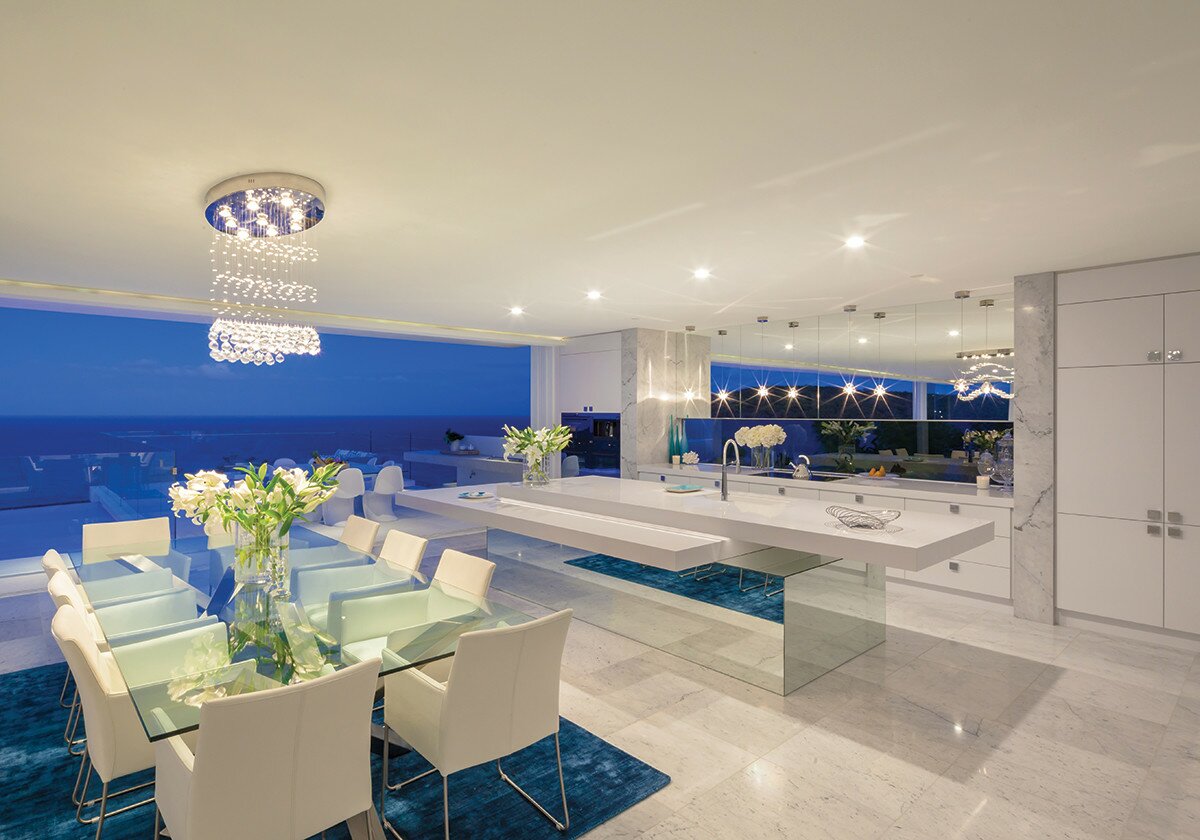 “We really had to push every height limit to get the best out of it, the pool is raised seven metres in the air, it’s the same level as the roof next door, we really pushed the boundaries and it paid off.”

On the lower floor, there is a large amount of privacy and natural light overlooking the natural bushland and landscaped garden beneath the shelter of the pool and terrace above.

A large family room, with walk-in cellar, media room, three additional bedrooms, two bathrooms and laundry are also contained on this floor and provide a completely separate zone for other residents of the home.

Due to its orientation, the home allows a large amount of natural light as well as the ability to completely open up to capture the ocean breezes.

Pouring over the stunning pictures of this grand masterpiece, I picture myself relaxing on the daybed, bubbles in hand, drinking in the surrounds of the deep blue ocean beyond.
Now where did I put that lotto ticket?!