In 2012, David and Cheryl Giles embarked on a tasty venture when they opened a Grill’d Healthy Burger franchise in the heart of the Sunshine Coast. Now, they are helping raise thousands of dollars for worthy local causes through the Grill’d Local Matters program.

When David and Cheryl discovered one of the first Grill’d Healthy Burger restaurants in Brisbane, the husband-and-wife duo was looking to exit their corporate careers and run their own business.

“David was interested in hospitality because he’d had experience running bars and restaurants in his 20s and we both love food and love people, so we started trawling through the different food franchises available in Australia,” Cheryl says, taking a bite of her favourite Nourish and Flourish burger, a delicious beef burger served on a low carb Superbun.

“We walked into Grill’d in Rosalie, Brisbane, and went, ‘Wow – the food is amazing, the decor is beautiful, the brand is funky, the process is robust, the customer service is excellent, the pricing is reasonable, and Grill’d was up for franchise,” says Cheryl.

The only hiccup was David and Cheryl were expecting their first child, so they sensibly put their intentions on hold for a year, and eventually were presented with an opportunity to become franchise partners of a new Grill’d in the Sunshine Plaza, Maroochydore. After that, it all happened quickly; the restaurant was built and fitted out within four months, and David and Cheryl relocated from Brisbane to the Sunshine Coast three days before the restaurant opened.

“It was like something out of Noah’s Ark – we had two huge removal trucks, two cars, two babies, two cats, two televisions, two of everything you could imagine, and there was this exodus up the highway,” Cheryl says with a laugh. “We landed and bang! The restaurant opened three weeks before Christmas. It was the craziest moment of our lives.”

David now handles the operations within the restaurant, including training and mentoring their team of 30+ staff, while Cheryl draws on her professional background in marketing and communications to make a difference in the local community. 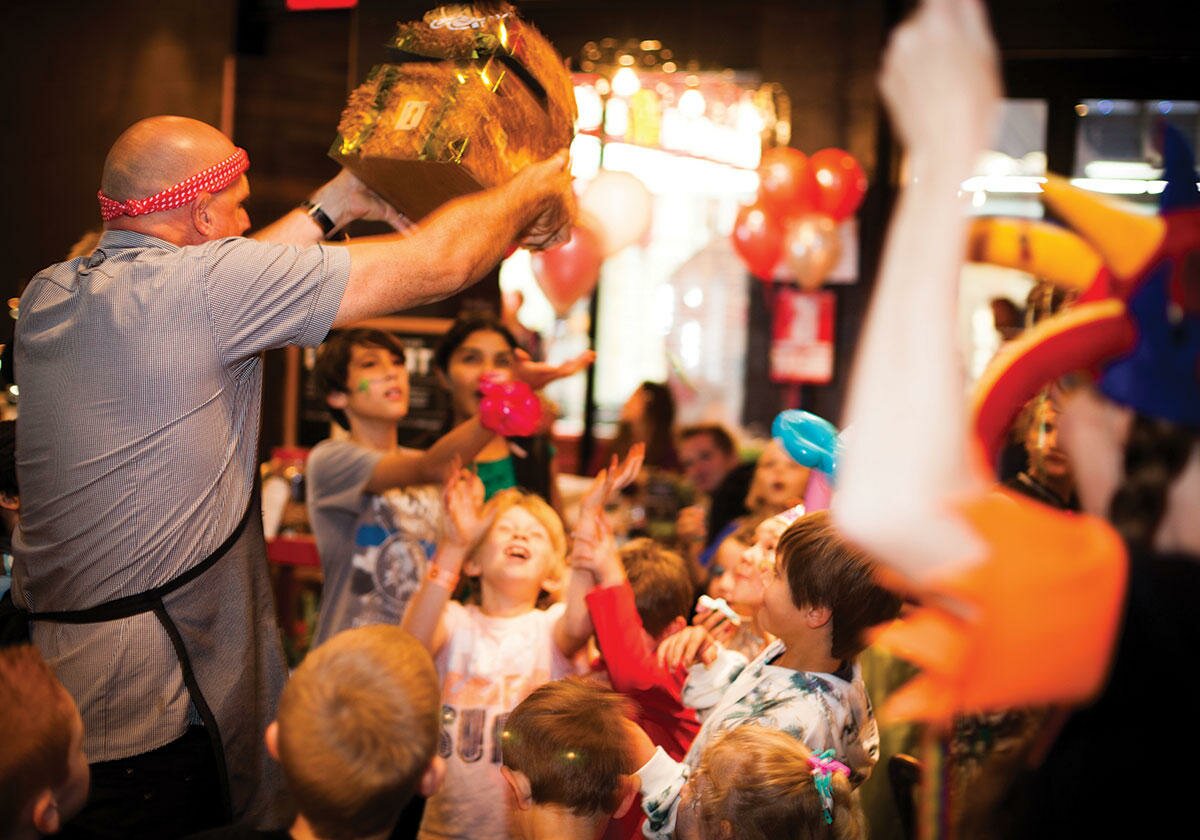 We’ve had the opportunity to spark relationships with great people and great organisations on the Sunshine Coast.”

“Everyone who comes in and buys a burger is given a token to place in one of three large jars in the restaurant, each representing a local community group for that month,” says Cheryl.  “The customer gets to vote on which community group they want to win and at the end of the month we count the tokens in the jars. The group that has the most tokens wins first place and a $300 cheque, and the other two groups also receive a $100 cheque each.

Grill’d also gives free burger certificates to local sports clubs to hand out to players each week that put in an ‘awesome effort’, which is why they’re called “Awesome Effort Awards”. It’s a really nice way to keep young people motivated in sport.

“We’ve had the opportunity to spark relationships with great people and great organisations on the Sunshine Coast, and often just by picking up the phone we can find another opportunity to work with them on a deeper level. That’s our goal – what more can we do for you? 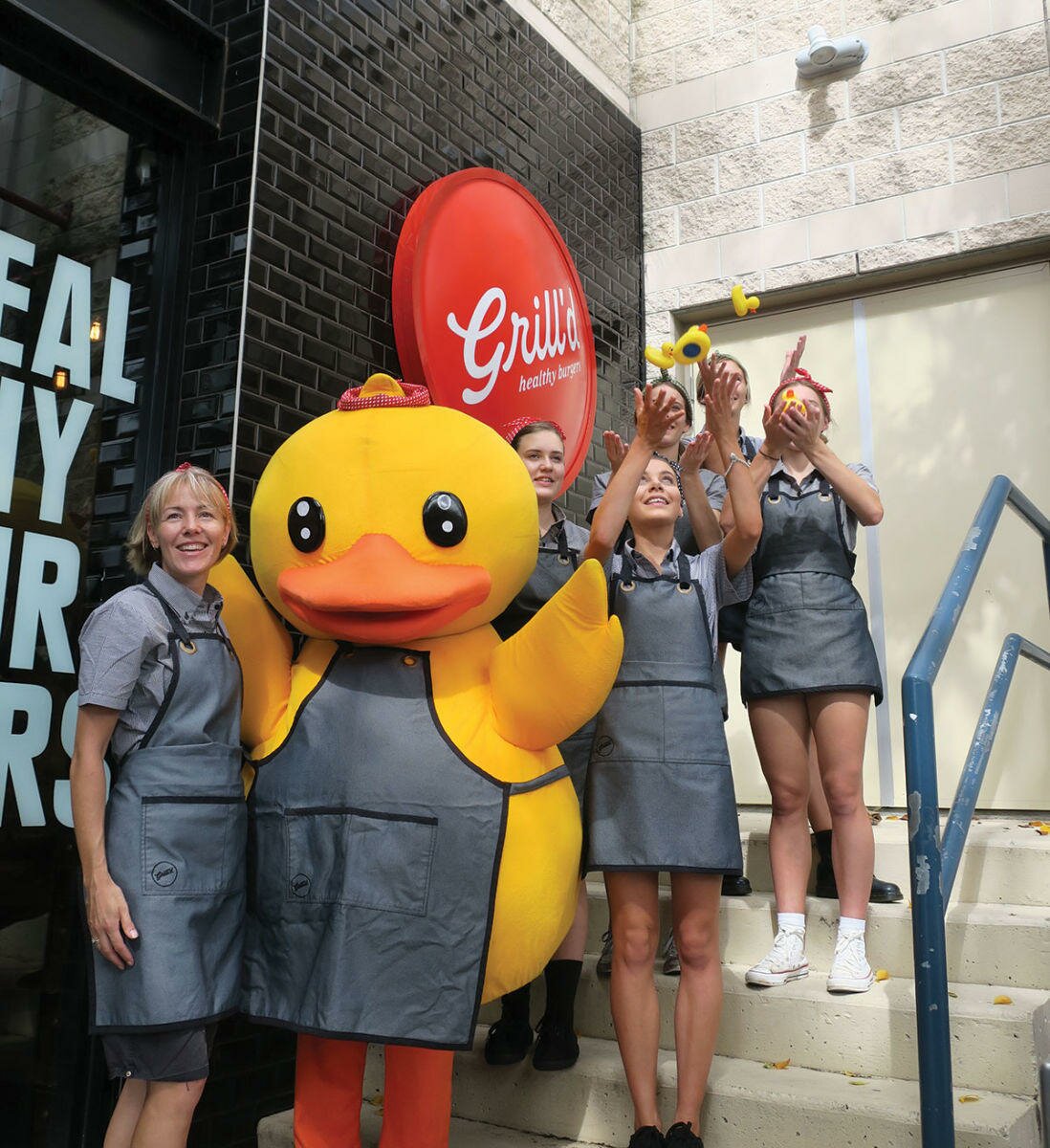 “Then there are those fundraising opportunities that come around each year and are quite big on the Coast, like the Duck Race at the Plaza, and Give Me 5 for Kids. We heard about MixFM’s Give Me 5 for Kids in the first year we opened so we’ve done something for them every June,” explains David.

“This year we hosted a Kid’s Karaoke Party, which was heaps of fun and we threw 100 per cent of the proceeds into the pot.”

There are some amazing organisations helping young people that Cheryl and David support through their business such as the Compass Institute, which provides young adults with disabilities with training and jobs, and Headspace, which helps young people aged 12-25 who are going through a tough time. Then there’s Smiling Minds – a group of school kids who came into Grill’d last year to show David, Cheryl and their team how to meditate on their deck.  “We closed our eyes and listened to all the different sounds in the Plaza: the chiming of the clock, shopping trolleys clattering by, boats on the water, the wind in the trees, the chatter of people. It was quite interesting, as so often we’re tuned out because we’re just too busy,” says Cheryl.

David and Cheryl didn’t anticipate measuring their success by their capacity to back their local community, but David says, “It feels good to give something back”.

Rolling the metal token between my thumb and index finger, I read the descriptions of each charity before casting my vote. All are groups I’ve never heard of before, which further exemplifies the importance of the Local Matters program, in raising money and awareness for every cause – no matter how big or how small.

Local Matters
If you’re a charity or community group wanting to apply for the Local Matters program, visit www.grilld.com.au/localmatters and fill in the short online form with an explanation of your cause and why it benefits your local community. Grill’d wants to hear from you!