The Gender Gap: What Do Men Think About It?

Being the empowering women issue, I thought it only fair to get the blokes’ opinions on women in the workforce. Over a delicious breaky at The Velo Project, Mooloolaba, the lads opened up about the gender gap and how they think the fairer sex measures up when it comes to management.

I am strong, I am invincible, I am woman.  Australian singer/songwriter Helen Reddy was ahead of her time when she penned the iconic 1975 hit, I am Woman, which became the anthem of the women’s liberation movement.
Fast forward 40 years and we have come a long way from the days when women in many industries, including banking and the airlines were forced to resign when they fell pregnant and the number of women in CEO and senior roles were pretty much non existent. 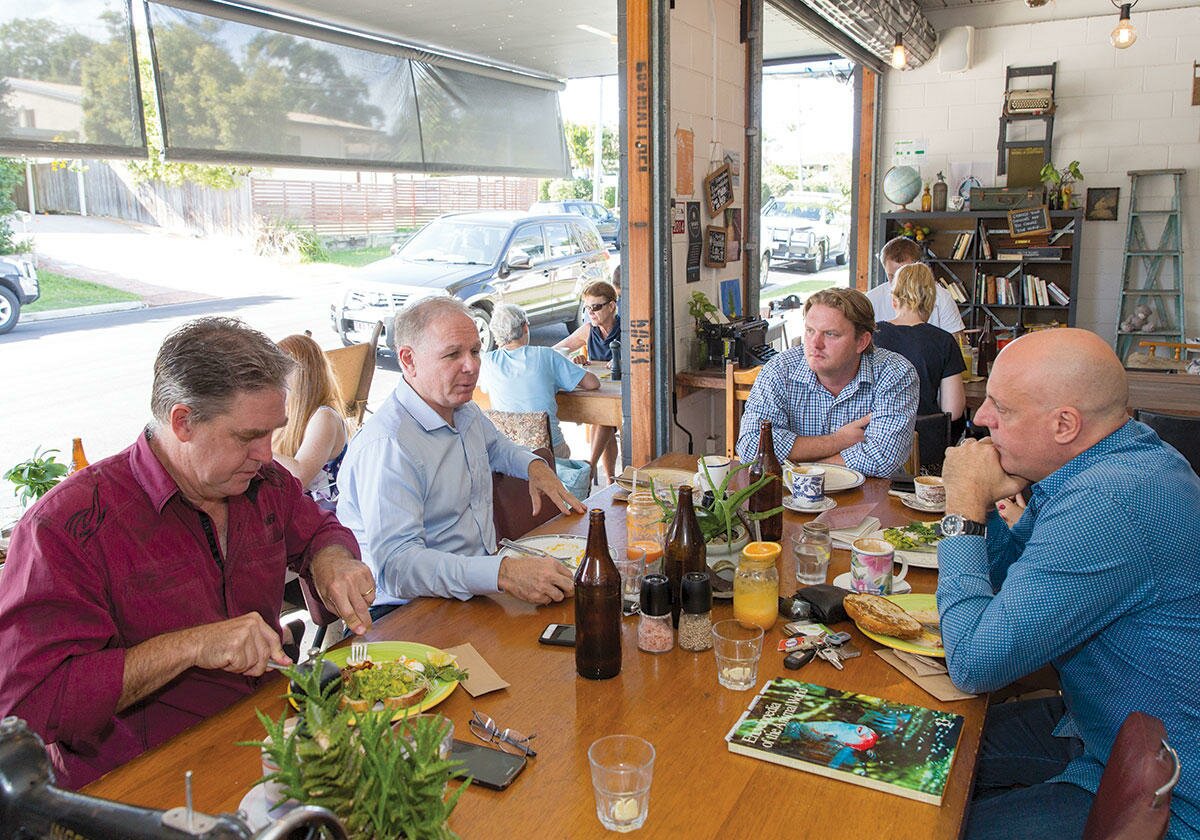 It’s my belief that when the world is finally run by women it will probably be a much kinder, emotional and thoughtful place.” – craig levitt

Recent studies show that women’s participation in the workforce has never been higher in Australia, with an increasing number of females stepping their stilettos into roles that were traditionally reserved for their male counterparts. But that’s not to say we don’t have a long way to go, with recent research showing female managers are currently earning around $100,000 less than men in the same role.

To discover how the lads felt, I posed some thought-provoking questions to the Blokes About Town for their take on gender equality in the workforce and how they felt about working for a female boss.

Joining me for breakfast was Luke Bell, owner of Fresh Holistic Health Centre, a fabulous new holistic health clinic at Forest Glen offering everything under one roof including doctors, physios, naturopaths, dentists, yoga, pilates and lots more; David Giles, owner of Grill’d Maroochydore, famous for changing the unhealthy stigma associated with burgers, with his team well known for serving up delicious healthy burgers with an emphasis on awesome service; Chris Woodland, owner of Statewide Drafting, a business he has run successfully for over 25 years; and last but not least Craig Levitt, marketing manager with Think Money who also has a passion for human behaviour and runs goal setting and mindset programs for clients. 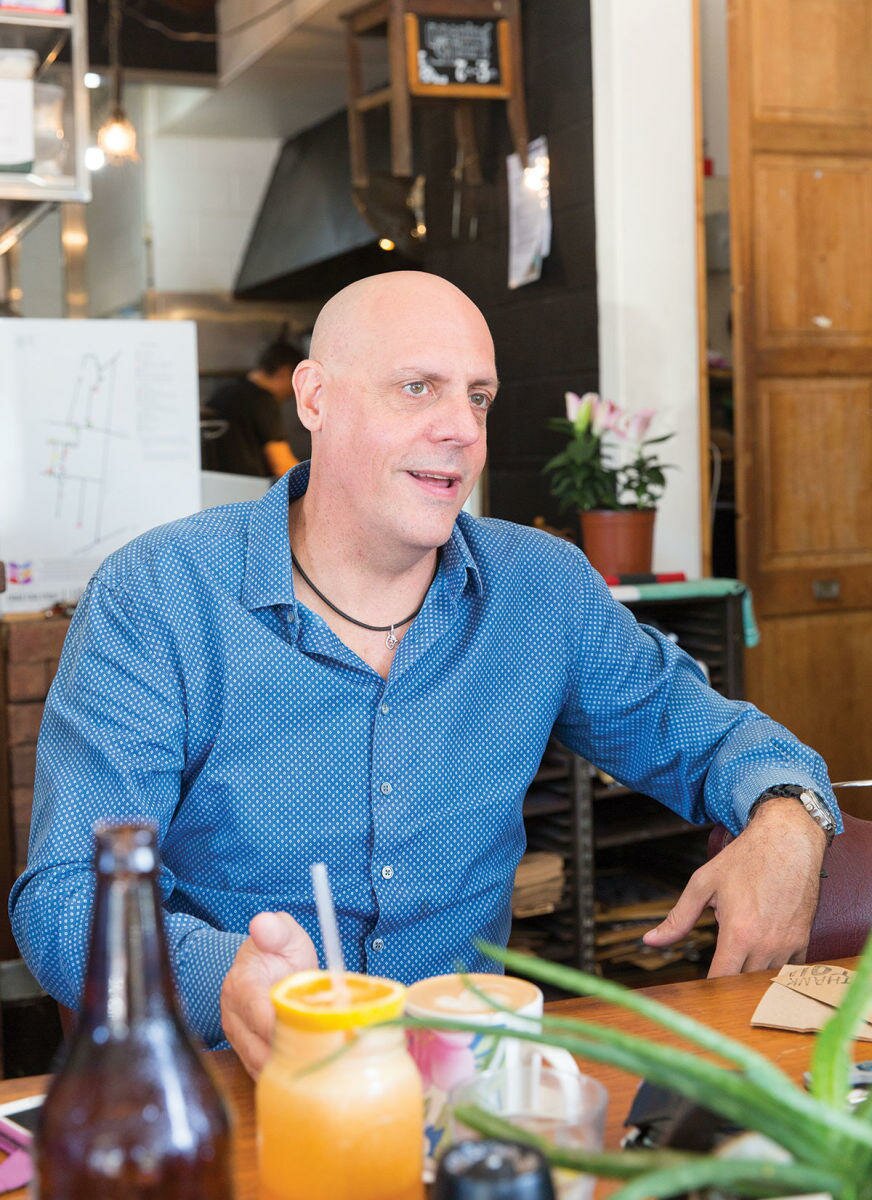 profile: Gents how do you feel about working for a female boss?

craig: Things have changed nowadays but in my era, women felt they had to be ballsy and tough to succeed, and I feel it affected their natural performance as a manager. I would encourage women as bosses to keep that softness and female intuition. I believe wholeheartedly that when people act and behave as their true self, they will excel. When people are just themselves they thrive and add so much more value to a business. Women bosses should just be themselves.
chris: I’m not opposed to it at all. I respect anyone who is good at what they do, full stop. If the CEO of a company is female, as long as she has the knowledge, that’s all that counts. I work well with people who have done the hard yards and are there because they deserve to be. That’s why I struggle with politicians both male and female – it has nothing to do with their gender. I do think it’s still a man’s world in many ways.
david: Most of my professional career was in IT and it was very male dominated; it was very rare to have a female boss. Personally, I respond well to confidence. If I can learn something from someone and they know what they are doing then their gender doesn’t matter to me. The time I did have a female boss was fantastic, she was a very smart, driven woman. I’ve worked under a lot of male bosses who had nowhere near the confidence and ability she had. Basically a good manager is someone I can follow as a leader.
luke: I have had five female bosses in different industries throughout my career. I have found them more hard working than guys. My current boss, my wife, just doesn’t stop, she is amazing! I don’t think it’s even about gender anymore, so long as you can do the job, it doesn’t really matter. 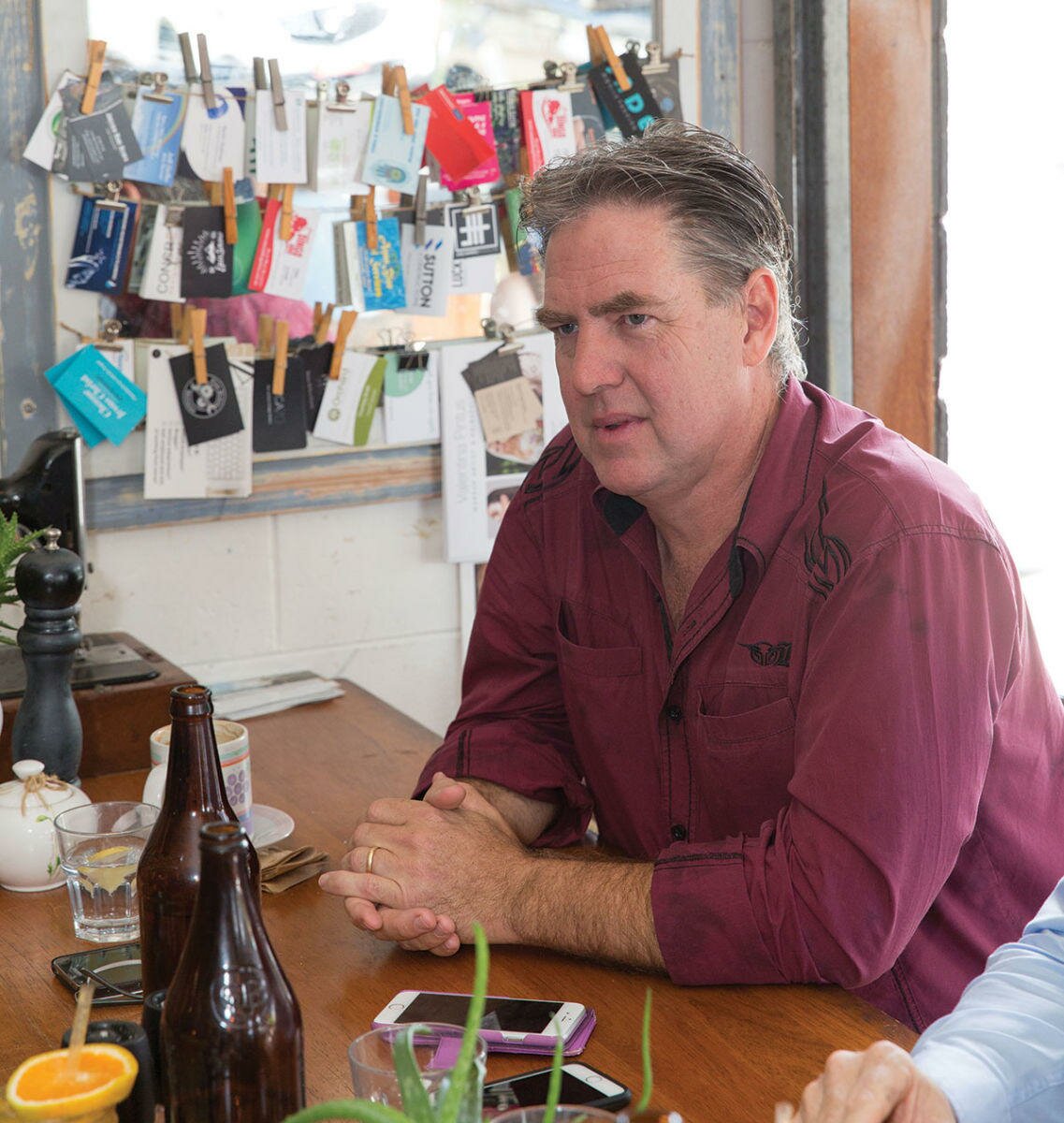 Life is not as simple as it used to be and a lot more women who might have stayed at home need to work to keep up with financial commitments.” - chris woodland

profile: Do you think males and females manage differently?

david: I have three managers at Grill’d, two female and one male, and none of them were chosen based on their gender. If I see ability I will nurture that ability as far as it can go, irrespective of gender. I do find women are often better communicators, they know what to say and when.
craig: I think women tend to read people better than men do. They tend to be more intuitive. It also depends on what industry they are in. For example there are quite a lot of female managers and CEOs in marketing because marketing is about the science of human behaviour and women are very intuitive, and determining people’s needs and wants comes naturally to them.
The science will tell you there are clear differences between the male and female brain. Apart from nurture, nature made them differently.
chris: I think it’s a generational thing too. If you look at kids finishing school these days there are a lot of similarities between the genders. Guys are doing home economics and girls are doing woodwork. Perhaps a more mature woman, who has grown up in a different era would manage differently, they might be a bit more nurturing and have a softer approach.
craig: My kids don’t see any difference at all, in fact a lot of women think they are stronger than the guys these days! 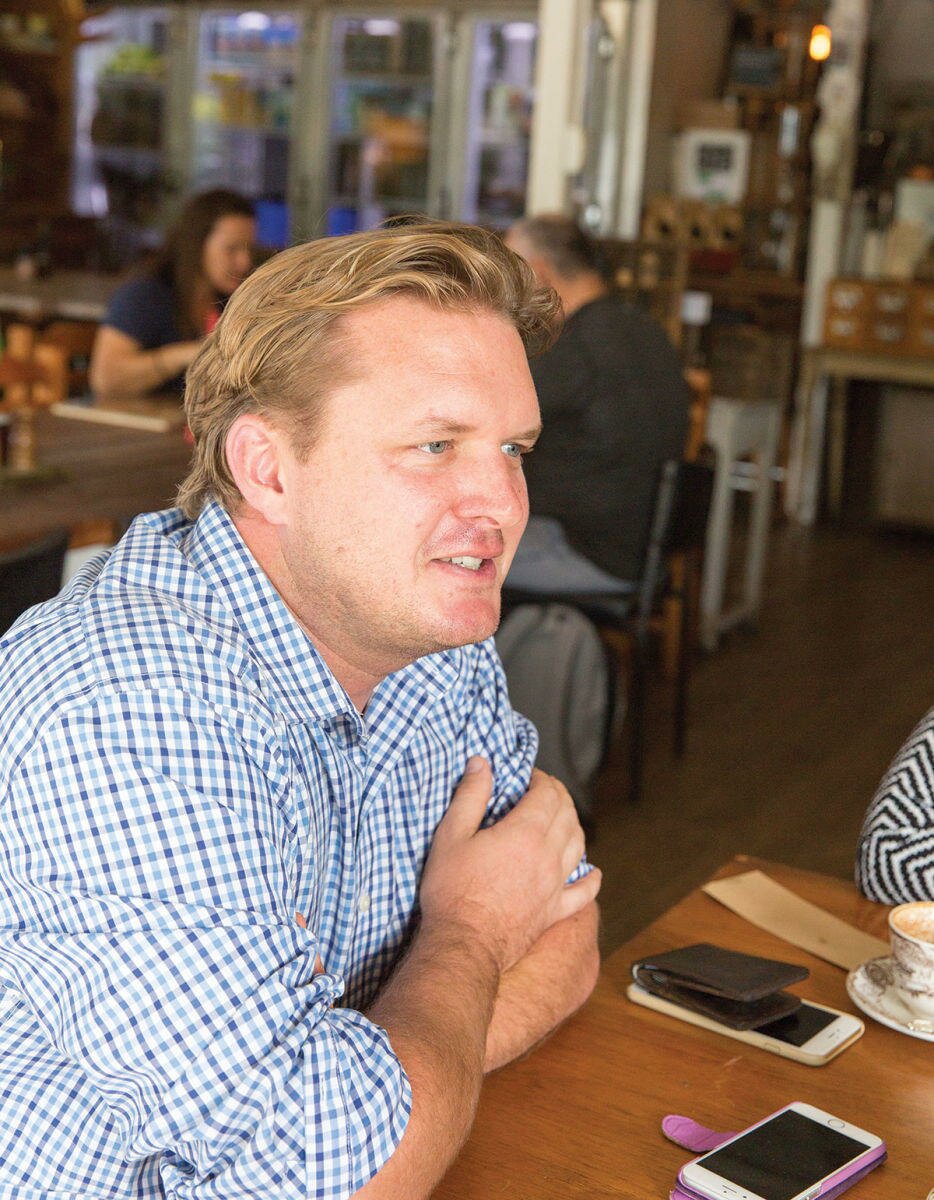 profile: How do you see the future for women in management roles?

craig: It’s my belief that when the world is finally run by women it will probably be a much kinder, emotional and thoughtful place. I firmly believe that.
david: We are seeing more and more women focused on career and being involved in the workforce. It’s a generational thing. With more women in the workforce there are naturally going to be more in management and at CEO levels.
chris: I think it’s also a financial thing too. Life is not as simple as it used to be and a lot more women who might have stayed at home need to work to keep up with financial commitments.
luke: In 20 years this conversation probably won’t even be on the table.

THE VELO PROJECT
It might be tucked away in the backstreets of Mooloolaba, but The Velo Project is one of those places you can’t ignore, its reputation for delicious, wholesome food in a warm and eclectic setting making it one of the most popular spots for brekky on the Sunny Coast. And after my recent visit for breakfast with the lads, I can understand why.
A hive of activity on the day of our visit, the atmosphere at The Velo Project is lively and welcoming. Quaint and homely, the rustic decor consists of mismatched tables and chairs, with lots of vintage pieces and interesting little knick knacks making it feel like a home away from home.
Owners David and Sarah Nash have owned the quirky restaurant for two years and pride  themselves on supporting local farmers and producers whenever possible. There is a lot of love and attention to detail that goes into each and every dish and it certainly shows on the plate.
The Velo Project’s breakfast menu is their speciality and it’s sublime. Delicious options include eggs benedict with local butcher’s bacon, Tasmanian salmon, or roasted pumpkin and wilted spinach; bacon and egg turkish with local butcher’s bacon, fried eggs, spinach and tomato chutney; or my absolute favourite, avocado smashed with fresh red onion, roasted garlic, corn, lemon juice and fresh herbs served on ciabatta toast, with the option of two eggs cooked to your liking – yum! They also offer delicious crepes, made with buckwheat and topped with an array of toppings including fresh banana, toasted pecan, butterscotch and chantilly cream – divine! Or if savoury is more your thing, try the smoked salmon, spinach, roasted tomatoes and fennel or grilled crispy bacon, banana and Canadian maple. My mouth is watering just thinking about it! Kiddies are also welcome with a great menu to suit and they offer a huge selection of smoothies, coffees, teas, and fresh juices. No wonder it was my venue of choice for a delicious Mother’s Day brekky last month.
The Velo Project
19 Careela Street, Mooloolaba
Ph: 5444 8693