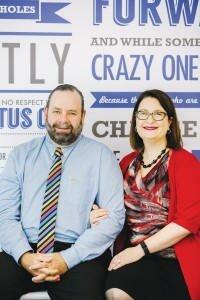 Eventually, Fiona left and went to work for another bank, and again Scott was hot on her heels and resigned not long after. But instead, he walked into a recruiting agency, where they had a ready-made position as state manager for a rural finance company. “Rural funding was totally different to anything we’d ever done before,” she says. “There were four major aggregators in Australia at that time, and we had a lot of people contacting us about private funding and solicitor funds and everyone kept saying, ‘no it’s dodgy’, but it’s not – you just have to have the right people and the right processes. You just need to be ethical and transparent. “So Scott retained the contacts no one wanted anything to do with. He could see the niche in the market, and after spending six months in rural funding, decided it wasn’t for him, and went out and started his own business, Independent Broker Network.” But in 2012, they had to “do a KFC” and go through an expensive rebranding because of the new ASIC laws preventing the word ‘independent’ in any marketing, and they became IBN.

“I always knew we’d be successful, because we’re both driven, I don’t think we settle for second best, and I don’t think we’re happy to be mediocre – we really strive to be the best at what we do”