In 1991, Ian Mansfield and his family left Australia for a one-year assignment to Pakistan, training Afghan refugees in landmine-clearance procedures. He didn’t return home for 20 years. Throughout Ian’s 22-year service with the Australian Army and subsequent 20-year career with the United Nations and other international organisations, he has visited over 80 countries, living and working in eight of them.

Travel has underpinned Ian Mansfield’s illustrious career, from inhabiting war torn and impoverished nations due to service with the Australian Army and the United Nations, to affording the luxury of “breakfast in Switzerland, lunch in France and dinner in Italy” while working in Geneva.

Having grown up in Ararat, a small town in Victoria, Ian hadn’t even been on a plane until he was 17, which he says wasn’t unusual in those days. It wasn’t until he joined the army as an engineer officer, after attending the Royal Military College, Duntroon, that he truly tasted travel through postings in Papua New Guinea, the United States of America and Canada. 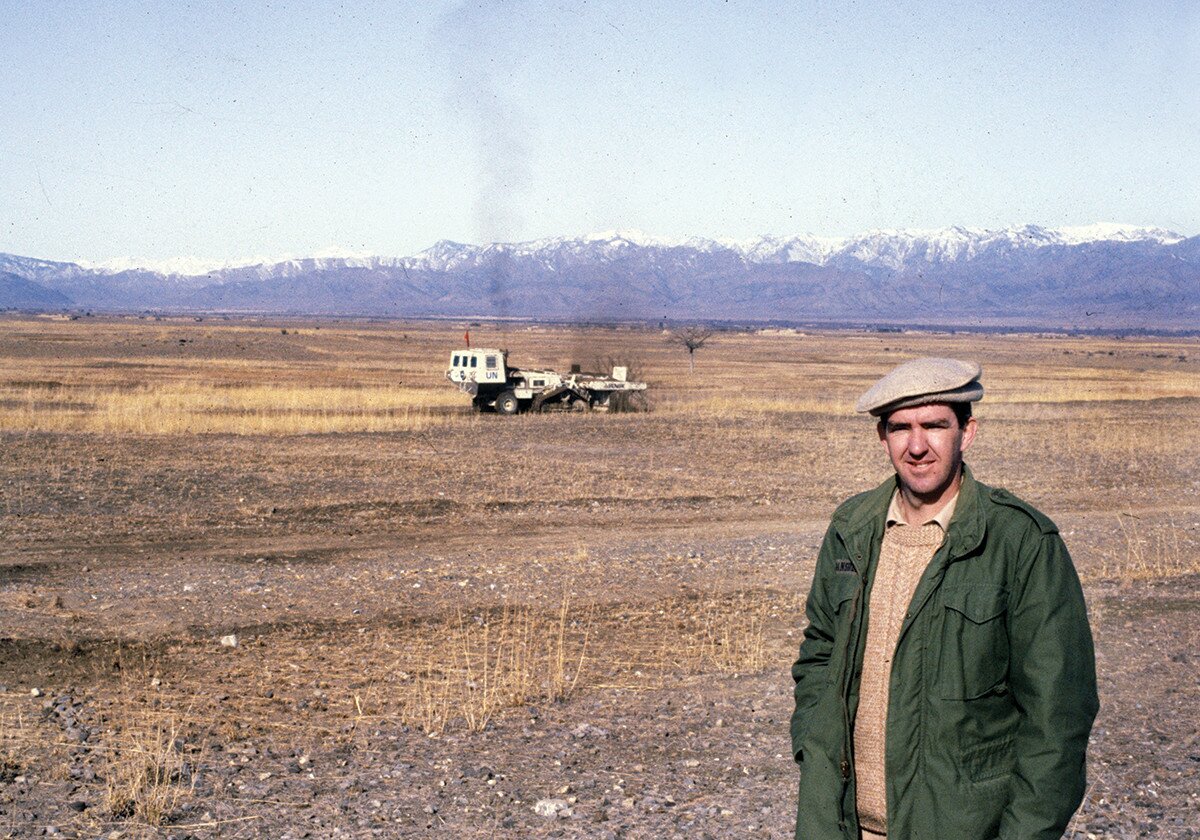 I went to my window and saw the second plane hit the building, it was such a clear beautiful day you could easily see it. We just couldn’t believe it was happening.”

“I started to enjoy travel and in the army you do move a lot, the average posting or assignment is two years,” he says.

In 1991, having served for two decades, his final posting was as a commanding officer of the Australian Army Training Team in Pakistan, tasked with assisting the United Nations in establishing a civilian program to clear landmines in Afghanistan for humanitarian purposes. His actions were later awarded with the Conspicuous Service Cross and saw him honoured as a Member of the Order of Australia.

“After World War II, destroying landmines and explosives was seen as a military thing, the army cleaned up, and then in the 1950s and ‘60s there were all these civil wars in Africa and Asia, but no one cleaned up the mines,” he says.

“It was only when the Soviets pulled out of Afghanistan in 1989, leaving behind a deadly legacy of millions of landmines, that the UN saw this huge humanitarian crisis looming; there were three million refugees in Pakistan, two million in Iran and they were expected to flood back home and everyone would get blown up and it would be a disaster.

“So for the first time ever, the UN appealed for money to train civilians to clear landmines for humanitarian purposes, not for military purposes. I was right there at the start of this change in approach, it was new ground and we were making it up as we went along.”

Ian’s final post doubled in a United Nations appointment and he left the army and went on to spend 20 years working in the mine-action sector, setting up new programs in Laos and Bosnia and working at the policy level at the United Nations headquarters in New York.

“After any war there is always a percentage of ammunition that doesn’t go off, like bombs, rockets, grenades. In some ways that’s easier because you can see them, but then you don’t know what condition they’re in; the slightest knock and they go off or they could be safe to pick up, so you need people who are trained to be able to deal with this,” he says.

“The philosophy is to train local people to clear the unexploded ordnance because they are stuck with the problem, it gives them employment and gives them the capacity to deal with it for years to come.”

Landmines are small devices (about the size of a coffee cup) buried under the ground, which are activated when stepped on, there are varying types of landmines and their damage also differs, some are deadly, while others are designed to maim.

“They’re nasty weapons and that’s the point, they’re indiscriminate; the war is finished, the troops go home, but the mines are left behind and I’ve seen them in Afghanistan 20 years later and they’re in perfect condition,” he says. 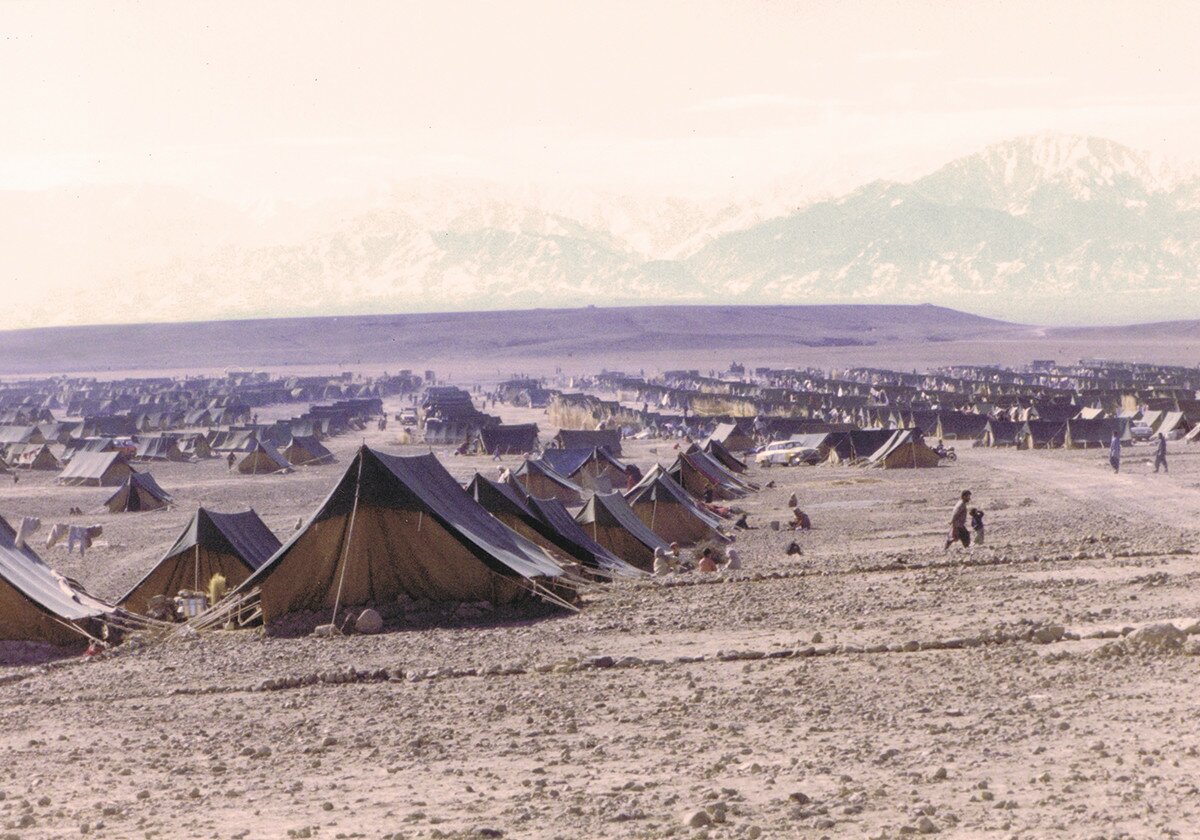 Through my work I saw the aftermath of three wars at close hand … the conclusion I came to is that no-one wins a war.”

Ian says it takes about five weeks to train a local person to clear landmines. As they are buried, often with no maps, a metal detector is used, which is time consuming given they are scouring battlefields littered with scrap metal from bullets, shrapnel and fragments. Once a landmine is found, it is safely blown up with a stick of dynamite and rendered inactive.

By the late 1990s, civil society was pushing to ban landmines, a movement heavily supported by Princess Diana’s visit to Angola and Bosnia, just weeks before her death. In December 1997, the Ottawa Treaty to ban landmines was signed and the campaign organisers subsequently awarded the Nobel Peace Prize.

“At a political level, people said, ‘This weapon is bad, it’s indiscriminate and should be banned’, and the treaty has been very successful, even though some countries haven’t signed it, the new use of landmines has pretty well stopped because of the moral pressure, the US no longer use them, and neither do Russia and China,” he says.

There are about 70 countries still affected by landmines, bombs or cluster munitions, some on a larger scale such as Afghanistan, Cambodia, Laos, Iraq, Vietnam, Bosnia and Angola, while others are more confined.

“The UK is officially declared mine affected because of the Falkland Islands, they had a war with Argentina in the ‘80s, so there are still some minefields on the Falklands. The borders between Peru and Ecuador, Chile and Bolivia right up in the Andes are still mined, in a lot of those countries it’s confined to a certain area. You read in the paper they still find bombs in Germany from WWI and WWII,” says Ian.

In 2002, Ian was working in New York and witnessed the terrorist attack on 11 September from his office on the 20th floor of the UN headquarters, less than five kilometers from the Twin Towers.

“My wife Margaret and I were walking to work and we heard this plane go across and we stopped and remarked that it was so low, but thought nothing more of it. Then when we were at work, she rang me and said, ‘It’s on the TV, a plane’s hit the World Trade Centre’,” he says.

“I went to my window and saw the second plane hit the building, it was such a clear beautiful day you could easily see it. We just couldn’t believe it was happening. We all got evacuated. That sticks in your mind.”

That same year, Ian was appointed deputy director of the Geneva International Centre for Humanitarian Demining, a role he held until retiring in 2011. Since then, Ian has kept himself busy writing a book and doing consulting work in countries like Lebanon, Jordan, Tajikistan, and more recently Palau and the Solomon Islands, to help organise the clean up of bombs from WWII.

“In the Solomon Islands I’ve been running workshops to develop legislation to make it illegal for people to touch bombs because of the ‘dynamite fishermen’, people who deliberately go looking for the bombs, try and crack them open to get out the explosive, put it in a soft drink bottle and throw it in the sea. It explodes and stuns and kills the fish and they scoop them up, but it damages the fish and reef, so we need to make that illegal,” he says.

“But it’s more than that, five to 10 people a year are killed or injured by these bombs.”

Ian’s book, Stepping into a Minefield is a personal account of his expeditions and pioneering humanitarian efforts.

“Through my work I saw the aftermath of three wars at close hand … the conclusion I came to is that no-one wins a war,” he says.

“It’s sad to see people try and scratch out an existence to stay safe and feed their family, just because of the violence and lack of opportunity they have, but then it’s heart-warming when you go to places that have recovered and see what can happen.

“Mozambique, for example, was heavily affected after their civil war with lots of landmines, they’ve since cleared all their mines and it’s one of the success stories in southern Africa. It’s encouraging when you’ve been part of that, made it safe for them to go back home.”

After four decades living and working overseas, Ian has finally returned to his home on the Sunshine Coast, having bought his first property here from a photograph while having dinner with friends one night in Islamabad in 1993; but that’s another story for another day.