Who knew posting an #OutfitOfTheDay photo could change the life for one teenage blogger? Isabella Wight never did, but has ridden the social media wave of success, sharing the highs and lows along the way, from collaborating with national fashion brands, to overcoming anorexia.

Nobody rocks thrifted $4 Prada jeans quite like Isabella Wight. Teaming the bargain buy with RM Williams boots, also picked up at a second hand store for $10 and an off-the-shoulder Beginning Boutique blouse in trending colour ‘brittle’.

At an age where most girls are still figuring out their individual style, 19-year-old Isabella is quite the opposite and pulls pieces together like a veteran.

“My mum is Texan and her mum was a big collector of vintage clothing and she handed it down to Mum and I have spent every day since raiding her wardrobe,” Isabella says, taking a sip of her long black coffee.

“She introduced me to what quality fashion looks like, as opposed to fast fashion which is so big these days. She taught me to understand class and style and bought me an Audrey Hepburn book for my 10th birthday.

“It has really come from family, which is the most natural way, so it’s been ingrained in me growing up.”

Along with a burgeoning passion for fashion, Isabella openly admits she also developed an unhealthy obsession with her body image.

“From the age of eight I have had eating problems, my weight has gone up and it’s gone down and they put it down to EDNOS (eating disorder not otherwise specified) or stress, or just the way that I am, but when I was 16 I was diagnosed with restrictive anorexia,” she says in a tell-all video post.

Having masked her condition for so long, to have an official diagnosis from multiple health practitioners took Isabella and her family aback. 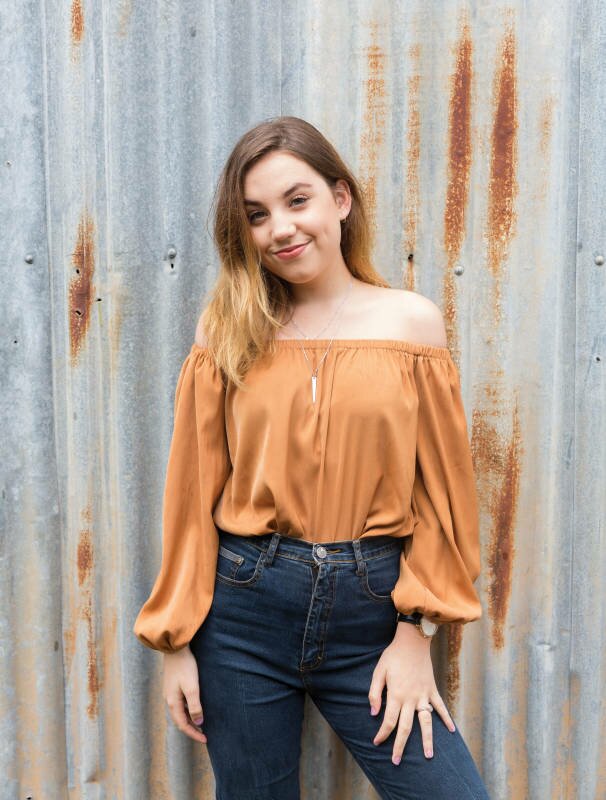 If you don’t love something you’re not going to be confident … it’s all about how you feel when you’re wearing it, you should feel amazing wearing it.”

“We tried at-home treatments and nothing was working, so I had to be sent to hospital,” she says.

“I had a very low heart rate and so many terrible physical symptoms, there was a possibility I wasn’t going to live through it. It was very traumatic for my family, obviously, and it took a huge toll on me mentally it was about a year of recovery from when I was diagnosed until I was officially recovered.

“I feel great now, but it’s always something I have to watch and something that’s in the back of my mind that I know about myself now.”

Keen to help other teens and their families, Isabella and her family have aligned with local and international organisations including the Butterfly Foundation, dedicated to bringing about change to the culture, policy and practice in the prevention, treatment and support of those affected by eating disorders and negative body image; and F.E.A.S.T, which supports the parents of eating disorder patients.

Isabella is now fighting fit and feels confident working in an industry often all-consumed by body image and self esteem.

“The most important thing is to remove yourself from anything that doesn’t make you feel good,” she says.

Find your style
The first thing is to dissect your wardrobe and get rid of the pieces you don’t love, that don’t fit you. Then look at the basics you have, your staples, and build upon that with trend pieces – but always come back to the basics and the pieces you know look good on you because that’s the most important thing, that you feel comfortable.
If you don’t love something you’re not going to be confident and that really comes across, it’s all about how you feel when you’re wearing it, you should feel amazing wearing it. You’ll notice when you see someone stylish, they’re confident and they’re killing it no matter what they’re wearing.

“There is no need to expose yourself to that sort of thing, at one point in my life there was a lot of ‘fitspiration’ and things on Instagram, so I unfollowed everything like that and tried to focus on what I really loved, which was fashion, it wasn’t modelling – which was another direction I was thinking about going down for a long time, but I realised that industry is not right for me.

“Through body positivity and self love, I’ve created an online community I feel so happy in and nothing makes me feel like I’m not good enough or I should look a different way.

“The hardest thing is when people say, ‘I wish I could look like you’, that’s the opposite message I want to portray, so I try to have full transparency about everything that has happened and what I’ve been through.”

Isabella was just 12 years old when she started tinkering on the keyboard and launched her Views of Now blog, posting about the everyday musings of a teenage girl.

“One day I posted a photo of my outfit and it got more comments than my other posts, which isn’t saying much at the time, but I continued to do it and people liked it, so I kept posting about my outfits and it grew to be an obsession,” she says.

Views of Now has not only garnered tens of thousands of followers, but has lead to some pretty exciting collaborations including the relaunch of Supre with the ‘Girl Gang’, Asos, Dolly magazine and Girlfriend magazine. She also recently signed with her first agency and has some lucrative offshore opportunities in the pipeline.

But that’s just skimming the cream for Isabella, who is heads down completing a three-year Fashion Merchandising degree at RMIT in Melbourne.

“I’m on the fashion campus of Brunswick, which is a dream come true, everyone there is a fashion student, so every school day is a fashion show,” she says with a smile.

“Most of the time when you have an early class you just want to roll out of bed and show up in your pajamas, or as close to your pajamas as possible, but there are people wearing Chanel, Balenciaga, Alexander Wang.”

While Isabella has settled into the fast-paced high-fashion world of Melbourne, she still regularly returns home to the Sunshine Coast where she’s more than comfortable striking a pose in front of a random alleyway wall and making it look like a fashion editorial backdrop.