For over two decades, Dui Cameron has been injecting colour into women’s wardrobes through her fashion label Boom Shankar, which started as a humble market stall and has grown into an internationally-renowned business.

Maybe some women aren’t meant to be tamed. Maybe they need to run free until they find someone just as wild to run with them.”

The quote from Sex and the City’s Carrie Bradshaw hangs proudly in Dui Cameron’s beautiful Peregian Beach abode, bursting with delicious jewel tones and eclectic collections from her worldly travels.

“I lived in Thailand for a long time in the early ‘90s and Dui is a nickname. My real name is Katie and I actually don’t care what anyone calls me, it’s just that the nickname stuck,” she says with a bright smile.

But it has been Dui’s time spent in India that has had the most profound impact, shaping not only her life, but her business. 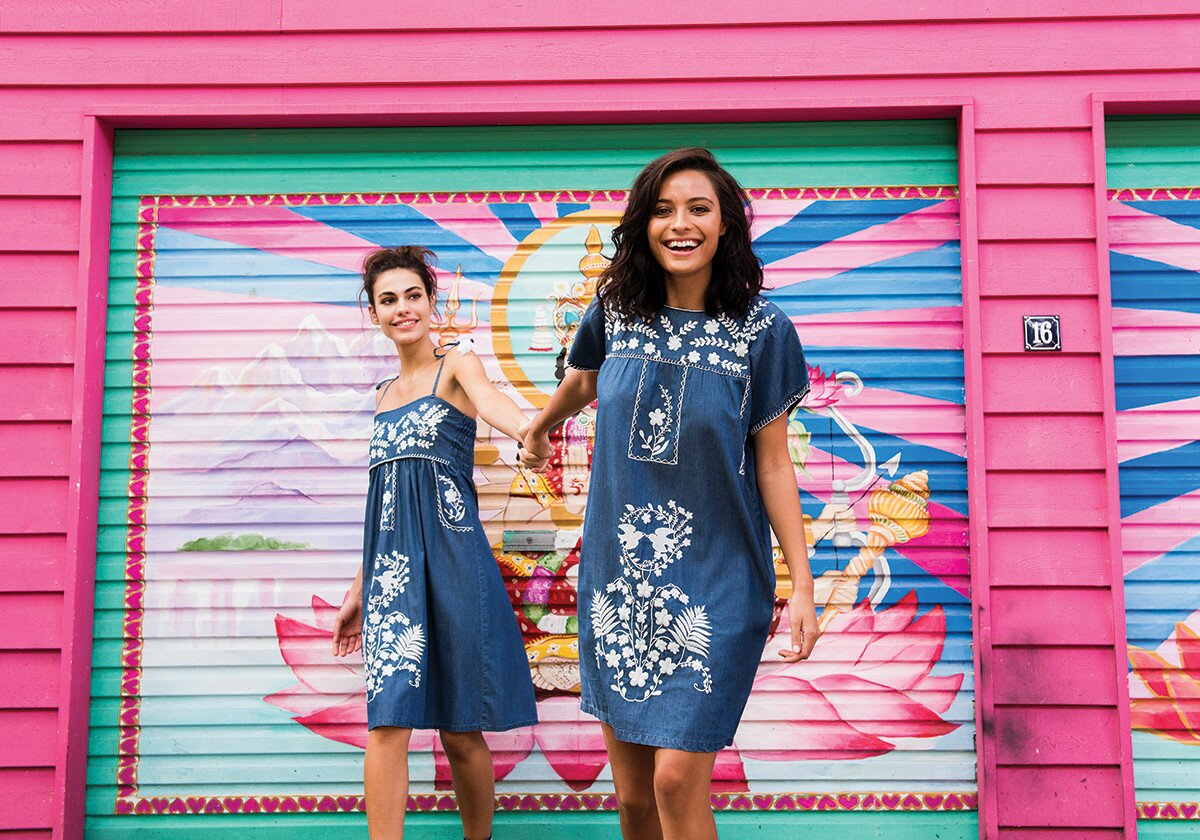 “I’ve always felt a very strong connection with India. I remember as a child, my dad’s brother was a really old hippy and spent years living in Afghanistan and India, maybe his stories sunk in,” she says.

“When I landed in India, it was the early ‘90s and Delhi was quite different than it is now, but there was something about it, something about the people – I connected very quickly with a bunch of street kids in Delhi and they just made me beam.

I was blown away with the fact it didn’t take money to be happy, the smile on people’s faces or how willing they are to offer you a chai; that giving was really beautiful.”

Extending the same warm hospitality to me, Dui offers to order me a coffee from the cafe downstairs. Her studio in the heart of Peregian is laden with colour – clothes rails display her upcoming collection, artwork adorns every surface, and her goldendoodle, Harry, takes pride of place on the jade lounge among the decorative cushions.

Dui turns the pages of a large portfolio of sketches beside her, explaining she’s always drawing, which I soon learn stems from an early adoption of fashion. 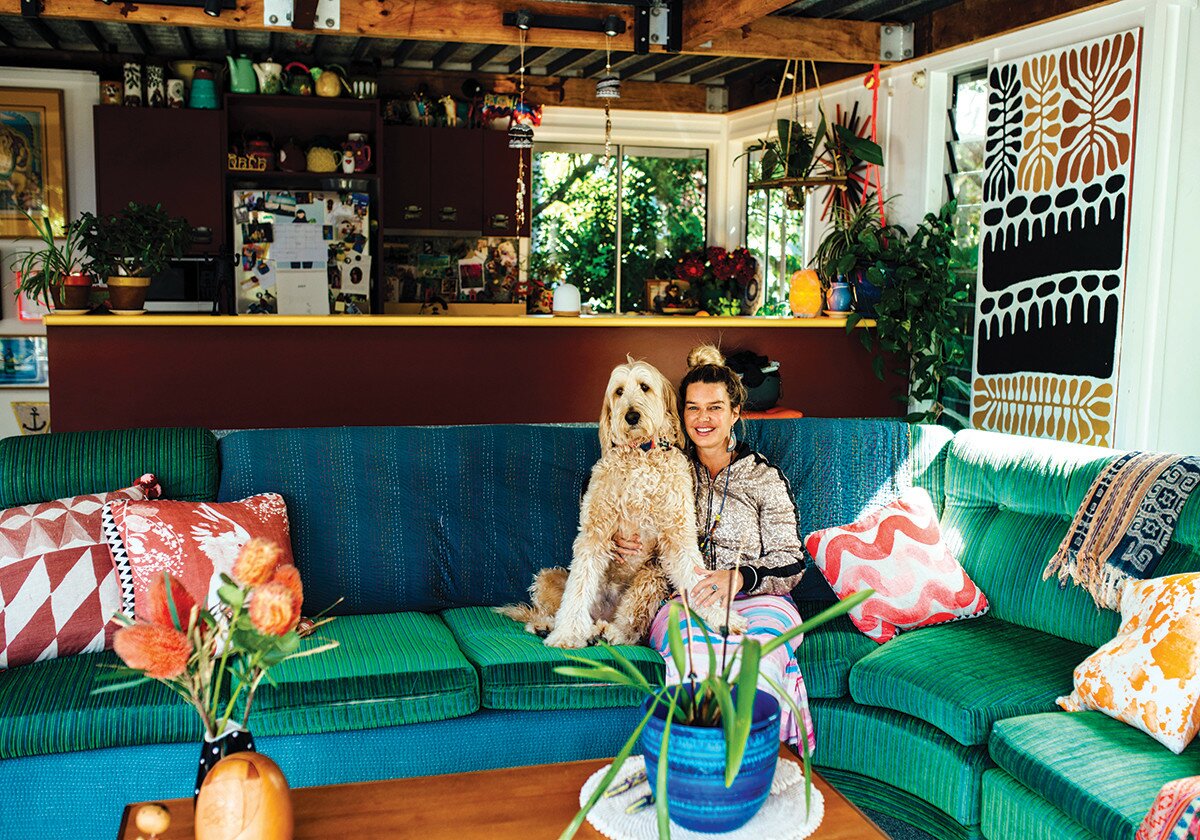 “I think I have always been someone who will wear what I want to wear, I’ve dressed myself from the very young age of two. My mum wasn’t allowed to dress me and I’d mix things up, I’d wear tutus with rainbow socks and do things I thought were normal and she thought were crazy, because she’s a real country conservative girl and I’m the opposite. So I’m pretty sure she didn’t know where I came from and it never changed,” Dui says.

As I grew older I continued with my own style – I just love colour and mixing it up with contrasting things that are not so popular to wear, I would do my own thing.”

Dui shared her style with others and sold handmade clothes at the local markets, before travelling overseas where she also sold her wares.

“I did the market in Goa in India, I’ve sold on the streets in Tokyo in Japan, and I’ve sold in Thailand; making money to keep travelling, I fell in love with travelling around the world, particularly Asia,” she says.

While living in India, Dui’s passion soared, utterly inspired by the colourful world around her. She began making clothing out of old saris and mixing them with different fabrics, colours and bling. 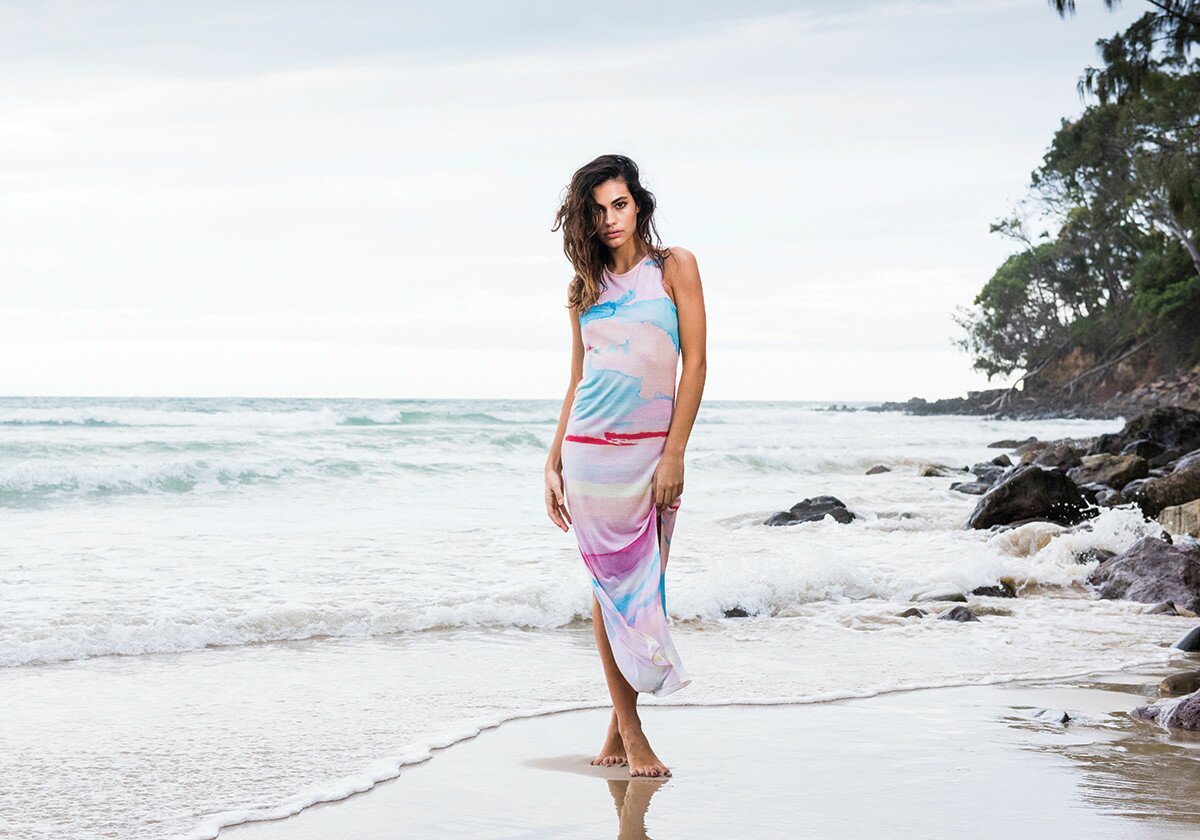 “The women look immaculate, no matter how rich or poor they are, they’re in colour, so it really shone through and it really resonated with me; that beauty of women and colour,” she says.

You would see women in saris sweeping the streets and they were fluorescent pink with a yellow stripe going down them – I thought they should be on a catwalk!”

When Dui returned to Australia, she opened her renowned Boom Shankar stall at the Eumundi Markets, which grew into a wholesale business and has had great success over the past 22 years.

“When I’m putting a collection together I often start with a country or a story, so for example the summer ‘16 collection, with Samantha Harris in it, was an idea based around Palm Springs in America and that era, that cocktail party, the big hair, hanging around a pool; that was my initial inspiration and then it goes off into side carts,” she says.

“I try to design something for everybody and every age, which is really interesting now because I have such a variety of ages that will be drawn to different pieces – my mum who’s 75 will wear certain parts of the range and then I have friends whose kids are 16 who will wear parts of the range too.

I’m starting to wear it more now, and I’m often wearing things that aren’t out because I’m making samples to fit me first, because if I really love something I feel a lot more confident going into it. My wardrobe is half my stuff and half somebody else’s.”

The eclectic use of patterns, prints and designs is what Boom Shankar has become known for, with Dui’s designs hitting icon status.

“I work with a couple of graphic artists in Australia and we do a lot of print working here, which we’ll put into files to develop and I work with these big Pantone books to put our palettes together. Then it gets sent off to India, to a massive printing place and they’re made on incredible mills, they’re wild,” she says.

“I have also dabbled in hand blocking for 20 years and we’ve worked with organic indigo dyes.”

Some of Dui’s designs are also embellished in embroidery, which is all done by a talented community on the border of Pakistan and India. 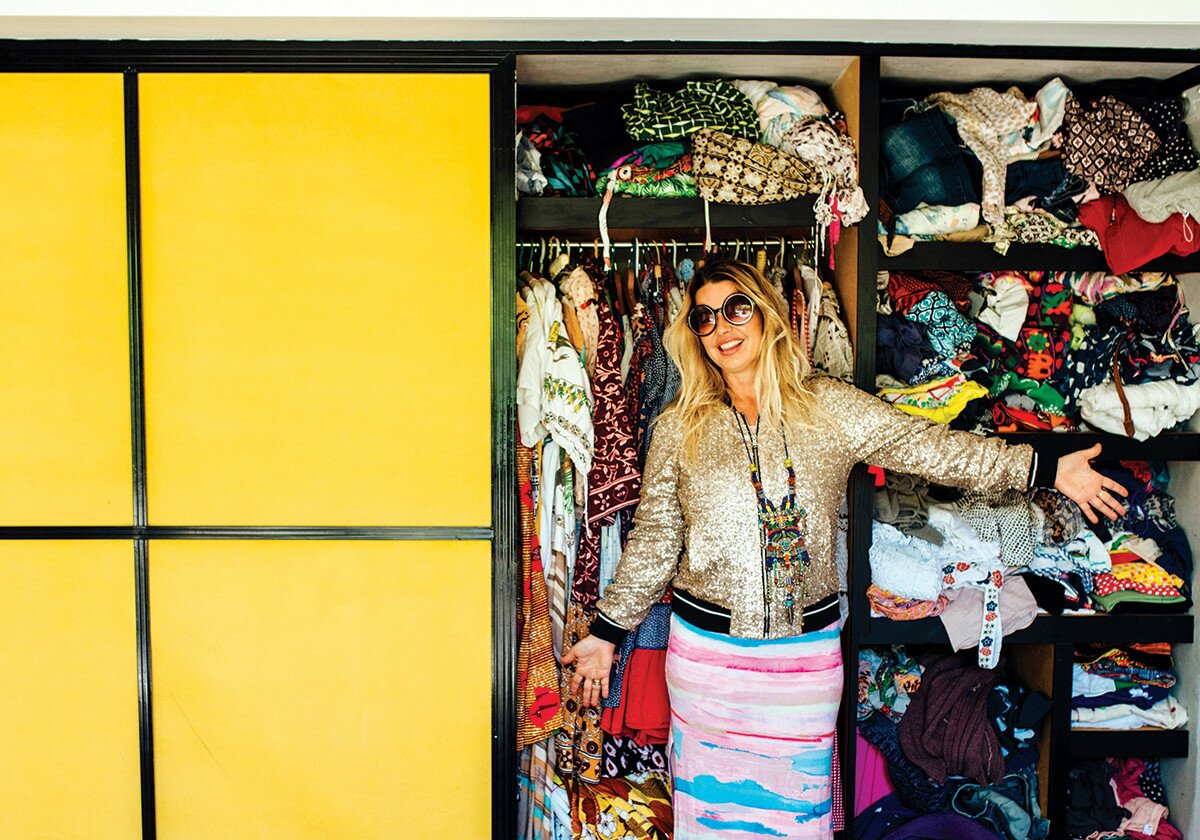 “They are in a bit of no man’s land, they’re Pakistani residents but they’re of Hindu descent. They are incredible embroiders and they were coming to the village where I lived, looking for work. We got friendly over a few years and I said to them, ‘There’s something we can do to help each other’. I needed a government pass and two police escorts to go to the village and we took all of our old fabrics.”

The community has no electricity and uses pedal Singer machines – the men sew the patches of material together and the women stitch.

We try to do something in every collection that has hand work in it, so we know we’re giving these guys our work,” she says.

Boom Shankar has become a transient business, with Dui running it for four months from her home in Rajasthan, India, and the remainder of the year she is here on the Sunshine Coast.

“We used to spend six months on six months off but my son Charlie started high school, he’s in Year 8 now and he has a music scholarship, so he’s pretty deep in the school,” she says.

We have a home in India, I bought land about 12 years ago and built our home in the desert. We have one dog, seven cats, eight Indian star tortoises and one cow, they’re all rescue animals. And we have a family, he’s like my Indian brother and he looks after our place and the animals, we call him Skip.

“The whole family goes over at times, my mum and dad love it over there, Charlie went to school over there for a while through primary and he’s grown up in India since he was six months old.

“We have two homes and in totally different worlds, which I feel very lucky to have because I have very strong roots, I’ve been in India since I was about 18, it’s home, and Australia is also home, they’re just in different places.”

What is your favourite colour?
I love yellow, it’s my favourite colour in the world, I absolutely love it. There’s something very, very happy for me with yellow, it has been my favourite colour since I was very young and it has never changed. It’s a colour most people say they can’t wear, I believe you can wear any colour, I think it’s how you wear it and how you wear yourself. Where has that belief come from that you can’t do something? Don’t domesticate yourself into that box, stand outside of it and it’s amazing how much you’ll shine. 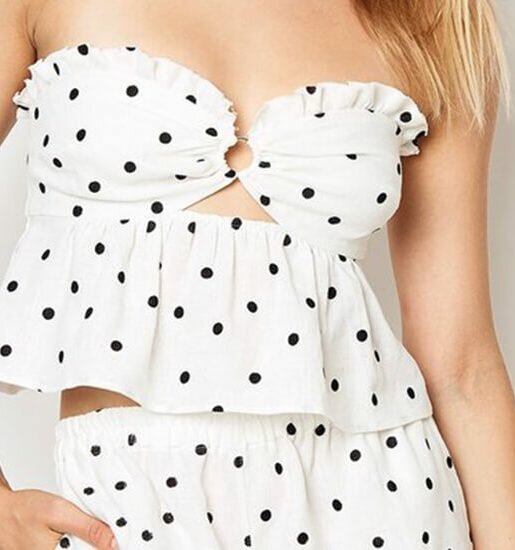 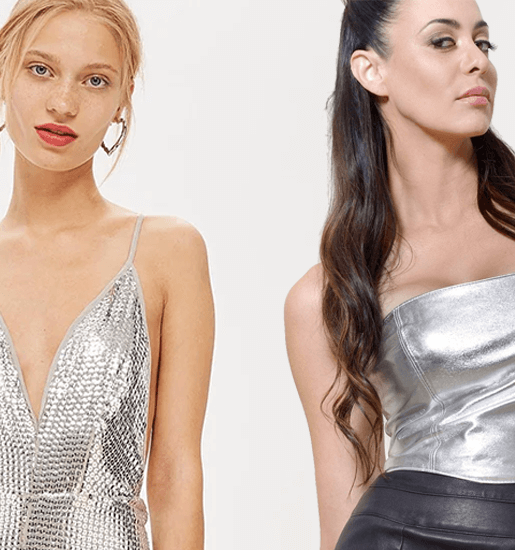 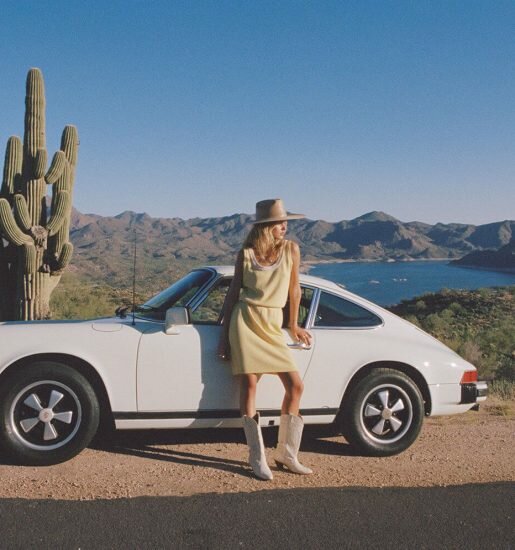 What To Pack: The Stylish Essentials